Home Yu-Gi-Oh! Extreme Force: What You Should Know – Yugioh

First time doing this for a main booster set. Hello Pojo Readers, Crunch$G here with another article for you, and another installment in the What You Should Know series. Today, I will give information about the first main booster set of 2018, and one I sorta like, Extreme Force. There is a lot to discuss, so let me get started. 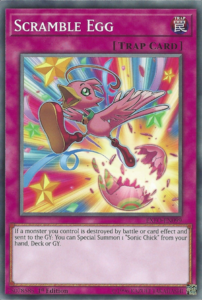 Yeah, it is best if we don’t talk about that… 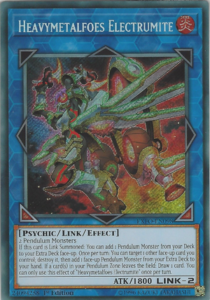 I did a whole article on all 20 Link Monsters from the Link Vrains Pack, so now would be a great time to check it out. 😉 The nine archetypes that got their Link Monsters in this set from the Link Vrains Pack are the following: Archfiend, Lightsworn, Gem-Knight, -lswarm, Noble Knights, Qliphort, Ritual Beasts, Zefra, and Metalfoes. The most noteworthy ones are the Noble Knight and Metalfoes ones, as those are the two most likely to have a big meta impact. With that in mind, don’t sleep on the Lightsworn, Gem-Knight, -lswarm, Qliphort, or Ritual Beast Link Monsters as they are great boosts for their respective decks and the Lightsworn one has several uses actually and the Qli one as well to an extent. We could of had 10 Link Monsters from the Link Vrains Pack imported, but that thing above decided to come instead. I just hope one of them doesn’t become a prize card. 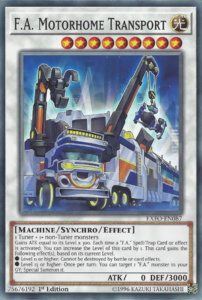 As expected, the Vendread and F.A. archetypes got further support in this set and now F.A.s are starting to look like a solid deck. We all expected a lot with Vendreads in a casual scene, but now F.A. can do something as well. When it comes to this set, all Vendread really got that is worthwhile is a new Ritual that many like to call a Shock Master but I think Ancient Gear Gadget is a more proper description. Vendread Core is another ok card, but I expect one at most to be seen in decks. For F.A., they got a huge boost in power with a new Tuner and Synchro. The Field Spell is pretty solid as well, along with the new Quick-Play Spell. I won’t go into too much detail about effects anymore in the off chance of CotD reviews, but the new F.A. cards are worth looking at. Oh yeah, we got some cool Pendulum Spirit monsters as well. For this set though, F.A.s are the stars of the show… or should I say race? 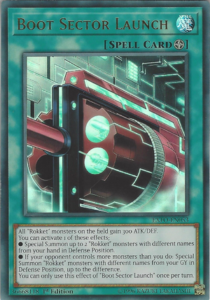 Besides the archetypal Link Monsters, many archetypes got some support in this set, some of which is actually. Standard Cyberse support is standard, though I think only one card in the group is somewhat solid. Rokkets got two pretty good monsters and a Field Spell that is amazing for the deck. A new Artifact to mess around with along with the three Moralltachs you have now. Remember the D.D. archetype? They actually got a new card, but D.D. won’t really stand as an actual deck yet. Dinosaurs got a solid new Boss Monster like card that can get your Evolution Pills and negate Spells/Traps. A new Code Talker, honestly the worst of the ones we currently have, wait until the next Cyberse Deck for another good Code Talker monster. Altergeists got a new Link Monster that is better than their Boss Link and a archetypal Call of the Haunted which is a Trap of course. Noble Knights got a new way to get to Equip Spells along with their Link Monster. Ghostricks got a new Trap to mess around with their Field Spells. Last, but not least, Archfiends got a new Trap to help revive your Fiends. Overall, ok support for past archetypes, but I’ve seen sets do this part better. 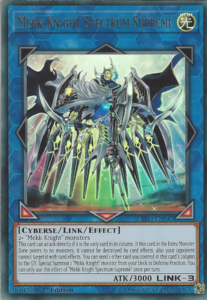 Most to all sets in the game have new archetypes and this one is no exception. Tindangle is a interesting Flip deck in my opinion, despite me never really messing around with it. Thankfully for the Tindangle players, all the cards are Common. The best new archetype would be the Mekk-Knights, a column based archetype that is a part of the World Legacy that gets monsters into specific columns so the Spells and Traps can negate your opponent’s Spell, Trap, or Monster Effects that are in the same column as a Mekk-Knights, just have fun getting the two Secret Rares in the archetype as well as some Ultra Rares. Mythical Beasts were a thing before, but this set really makes them an archetype considering they only had one card before. This is a Pendulum archetype based on Spell Counters, stunned it took so long to get this kind of archetype. It isn’t the best deck meta wise, but it is fun to mess around with, especially with a new Pendulum card that helps get two cards with the same scale out of your Extra Deck, which all the Mythical Beasts have the same scale. Just note the Mythical Beasts have some high rarity cards as well, including two Secret Rares if you count Pendulum Paradox as part of the archetype. Overall, the new archetypes are cool, but not broken. I do really like Mekk-Knights though. 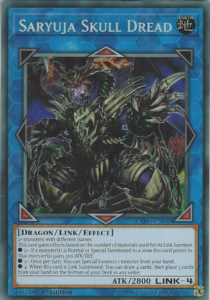 We got some new Link Monsters in this set that are worth mentioning. I already addressed the Link Vrains cards that are imports in this set. Underclock Taker is a nice somewhat generic Link Monster with good arrows for the Extra Monster Zone or Main Monster Zone, and is a Link-2 to help climb the Link Ladder. Triple Burst Dragon is good for handling cards in the Damage Step and might be relevant depending on the format. The Fire attribute gets their Link Monster in Duelittle Chimera. The big one in this set though is Saryuja Skull Dread, a very powerful Link Monster depending on the amount of monsters with different names you use, with an effect including recrafting your hand to be able to make plays. If there was one card I would recommend having, it is Skull Dread. Just wait for Security Dragon to make your newly Limited Grinder Golem broken. 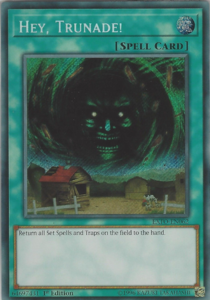 Finally, there are some non-archetypal cards in here that are worth discussing, especially for you anti-meta players. One is Inspector Boarder, a card that shuts down Monster Effects from a player that doesn’t control monsters of different types (Ritual, Fusion, Synchro, Xyz, Pendulum, Link). We got a new ”C” card that can shut down Extra Deck summoning mechanics unless the player uses it as material, so it can stop Extra Deck monsters that require very specific monsters. Keep three on hand, it is a Common, so it is very easy to come by. Downbeat is a cool card that is basically a reverse Transmodify, and Transmodify is a good card with tons of potential, and so is Downbeat. Finally we got Hey, Trunade! which is basically a replacement for Giant Trunade only it doesn’t have the part that made Giant Trunade broken, which was bouncing face-up Spells/Traps to the hand, the new one only bounces face-down Spells/Traps.

Overall, this is a solid set. Far from the greatest, but it isn’t terrible. I feel this is a set where it is better to buy singles, but opening boxes is always necessary because otherwise these cards can’t get on the market if they are still in packs. 😉 There is a good appeal to casual players in here, boosts to some old decks and some nice new archetypes to mess around with. Competitive players also have a few cards in here that they might want to grab for the future or for the meta of today. Not a terrible set, but Flames of Destruction will be much better when it drops this Spring, as it will have a bigger impact on the game.