It’s been a minute, but stumbling around random Yugioh information, it was brought to my attention we had some updates to the Ban List today, and while we may not get to cover (m)any of these in CotD, I figured it never hurts to take a look at some of these things!  This list is in effect until at least October, also, for the unaware.

Starting off, let’s look at a newly Banned card, in Eclipse Wyvern.  This is an older card, one that’s always been fairly easy for a Dragon player in about any desired build to abuse.  Given the ease of removal in the game today, and how it’s just as easy to retrieve removed cards, this one makes sense to me.

The Phantom Knights of Rusty Bardiche also was hit by the Ban hammer.  This is a phenomenal Field card, and anything that can destroy a card potentially every turn is asking for its place on the list, isn’t it?  Also being able to net a Theme card each turn, so long as you have the Monster to dump, makes this very dangerous.

Tempest, Dragon Ruler of Storms is back, which I know Austin referenced at least once in a review last week.  That surprises me, but maybe we’re in a mode they want us being able to use these guys at potential again.  They’re fun, but powerful cards, but I won’t complain about its return.

Daigusto Emeral returns as well, something else we just covered as a Throwback Thursday very recently.  We spend this time talking about why a card is Banned and whether it should/shouldn’t come back, only to see two such cards come back.  Which is really cool, if not ominous. 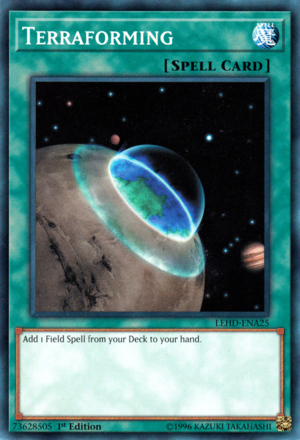 Terraforming, as well as the similar Trap, Metaverse, both are Restricted.  Too many Decks like their Field Magic cards, and too many copies of Terraforming (or the latter) makes it all too easy (said in my Darth Vader voice) to use and abuse them.  These are only as good as what’s in at the time, but with more and better Field Magics to use all the time, I’m fine with this.  Wouldn’t be surprised to see one (or both) move next time.

The waters continue to be tested here with CED being dropped from Limited to Semi-Limited.  I know you’ve had three available for a considerable time in the OCG, but this is still a safe, and prudent move.  Hard to be able to sit here and see the game evolve to a point where this has happened.

Danger! players took a hit to see Nessie, Jackalope, and Tsuchinoko take a hit going to Semi-Limited each, but with the slightly expanded pool, and the fact they’re only down to two, it shouldn’t cripple the theme for the player.  You’ll use more Bigfoot, or whatever else now, etc.

Elemental Hero Stratos going down to two is a puzzling move to me, but it’s fun to have him at two, as I don’t recall we’ve ever been able to use more than one.  He was Restricted upon (prior to?) release, if my memory serves, so that’s a great asset to the Hero players out there.

Trishula, Dragon of the Ice Barrier, went from Restricted to Unrestricted, and that does seem troubling to me.  This just screams one of those ‘abuse the hell out of me’ moves, but maybe it means nothing.  Usually…generally, that’s a sign nobody cares, but I’d like to see that be proven absolutely wrong.

In closing, the other most notables for me, are Dark Hole, Solemn Judgement, and Monster Gate all went from one to three on this list also.  I can’t see anyone playing Dark Holes, but Monster Gate, (much like Trishula to me) screams to be abused in multiples.  Multiple Solemn Judgements could be fun, as well as dangerous, but we’ll see what happens.

Hope y’all enjoyed this, I’m sure you’ll get a more detailed and in-depth article on this from Austin as well, I just happened to find this out first this go round.  Questions, comments, concerns, feel free as always to contact me @ tsearcy@lssu.edu