Home Yu-Gi-Oh! Lair of Darkness Structure Deck: What You Should Know – Yugioh 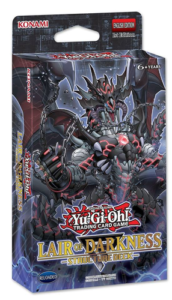 Behind the light, the darkness follows. Hello Pojo Readers, Crunch$G here back with more stuff you should know about another Yu-Gi-Oh product. This time around, I will discuss the latest Structure Deck, Lair of Darkness. Another revised Structure Deck for an OCG Exclusive deck, so kind of odd this is still a Revised Structure Deck in the TCG like Wave of Light when we didn’t get the original decks. With that out of the way, this does seem like one of the better Revised Structure Decks, probably in the Top 3 even though there are only 6 so far. Obviously, this deck is based around the DARK Attribute, so let’s talk about these new cards.

Creatures of the Night 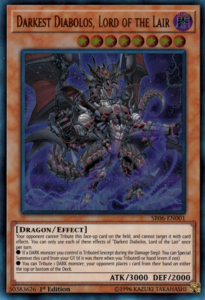 With a new Structure Deck comes a new boss monster, and this boss monster is nothing to laugh at. The summoning requirement is easy, just needing to tribute a DARK monster, and this whole deck is centered around tributing DARK monsters, so that sounds like no problem. While on the field, he has really good protection and can help you eat away at your opponent’s hand by sacrificing other DARK monsters. Next to that we got another new monster to help you get to Virus Normal Trap cards (I’ll get to those), or any Normal Trap for that matter, for 1 tribute. Another monster is basically a Terraforming for the theme’s Field Spell and it can also help you draw a card or search out more powerful DARK monsters depending on what you tribute. Finally, we got a monster that can summon itself by tributing any DARK monsters on the field and gets stronger for each monster tributed, it is basically a Kaiju with the Field Spell. Speaking of said Field Spell… 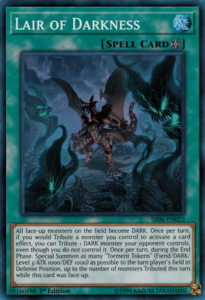 One of the most important cards in this deck is the new Field Spell that this whole deck is named after, Lair of Darkness. Lair of Darkness turns any monster on the field into a DARK Attribute monster and lets you tribute a DARK monster your opponent controls once per turn if you use a card effect that requires tributing. The most sinister of lairs for any Prince of Darkness. Not only that, but at the end of the turn, DARK Tokens come out for each monster tributed that turn so you can keep your sacrifices going. 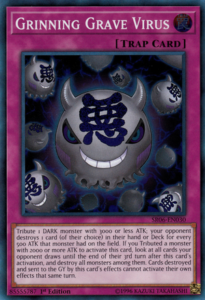 DARK monsters typically love the Virus cards, so it is fitting that this deck gives us a brand new Virus. With this Virus, you sacrifice a DARK monster just like all the others to destroy monsters in your opponent’s deck and hand and the ATK the tributed monster has will help decide how many monsters are destroyed. If said DARK monster is strong enough, however; you can also destroy every monster your opponent draws during their next three turns. The final nail in the coffin is that any monster destroyed by this effect cannot use their effect this turn, so your opponent can’t just send whatever they want to trigger an effect. 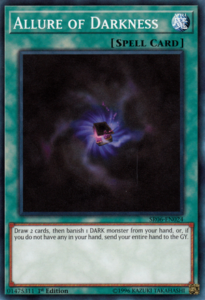 The Viruses are important to the DARK monsters, so it is fitting that all of them are in this deck. Crush Card Virus, Deck Devastation Virus, Eradicator Epidemic Virus, and Full Force Virus are all in this deck. Also since we had a Darklight buyout recently, this deck was kind enough to reprint that for us so it can stay at a fairly low price. In the Spells side, we get a reprint of Foolish Burial Goods for ditching Spell and Trap cards and Fires of Doomsday for when you want more DARK monsters to tribute or want to add Links to your deck. Also can’t forget the Allure of Darkness reprint, which is always great to have. In the monsters we get a much needed Caius the Mega Monarch reprint that probably should of been in the Monarch deck two years ago, Vanity’s Fiend gets another reprint to keep a low price, Tour Guide from the Underworld is a great monster to have at all times, Absolute King Back Jack has its first reprint to help get to your Trap Cards as well as Kuribandit. Finally there is a Fiendish Rhino Warrior reprint in here before it is out of circulation for too long.

This deck does have the potential to make a meta impact, especially with the Sky Strikers in Dark Saviors. For now, I can see this being a decent competitive deck. Likely won’t be the best deck, but I can see it getting several tops at major events. This is a very powerful Structure Deck that is nearly complete by just buying three of these decks. Get some of these and extra cards from elsewhere and you got a very good deck in your hand.