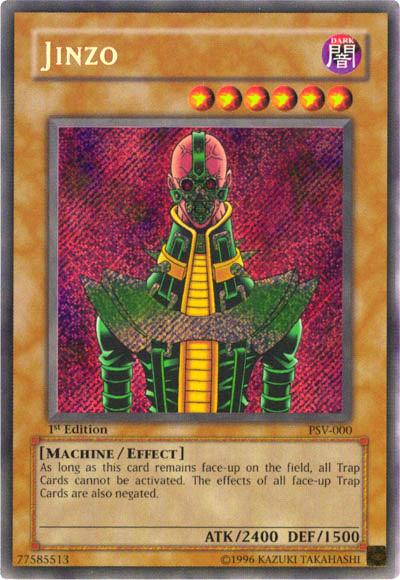 When Jinzo first came out, it was a big moment for Yugioh.  Up until that point, the game’s only LV5+ monster was Summoned Skull.  Jinzo was the first viable LV5+ monster with a useful effect.  Having 100 less ATK than Summoned Skull in exchange for a powerful effect was well worth it.  A strong card overall for legacy formats.  Good stats.  Ability to lock the opponent down, deal damage you wouldn’t normally be able to otherwise, force the opponent to make sub-optimal plays and OTK potential.  Also, it offers synergy with Call of the Haunted and punishment to degenerate stall/burn/Last Turn decks.

However, as time moved on, from 2003 throughout 2006, other cards were added to the card pool and many players still used Jinzo as a staple without even questioning if it was necessary.  Is your trap count low enough for Jinzo to not have an adverse effect?  Is your deck aggressive enough to capitalize on clearance that Jinzo’s trap preclusion provides?  Are your opponents using high enough trap counts?  Does your deck even need a tribute monster?  Are there many monsters Jinzo can get over but your LV4 beaters can’t?  Do you have floaters that you can tribute or are you minusing by tributing valuable monsters such as LV4 beaters?

An important question to ask: what traps was Jinzo locking down?  Trap Hole and Waboku were two fundamental trap cards in the early days of the game, but with the many powerful spell cards that came out, many players reduced their trap line-up to 6-7.  Of course, in lower tier metas, such as locals, many players at the time used more traps because they were more accessible than the holofoil power spells.  However, when re-enacting a modern format nowadays, it’s important to think about what traps the opponent will be using.  Of course, the 4 early staples were Call of the Haunted, Mirror Force, Imperial Order and Ring of Destruction.  Torrential Tribute was a big one, but keep in mind that a good portion of retro decks forego it due to how tight the deck space is.

Airknight Parshath, released just 2 sets after Jinzo, was an overall better tribute if card advantage was a priority.  It punished set monsters, whereas Jinzo fell prey to them.  Unlike Jinzo, it had potential to offer utility on the turn it was summoned, so that it still pays for itself even if it gets destroyed the next turn.  And there was also potential for perpetual card advantage.  It’s true that LV4 beater monsters like Gemini Elf and Goblin Attack Force were prevalent in the earlier retro formats, meaning Airknight had vulnerabilities Jinzo did not.  However, as beaters were slowly being replaced with effect monsters focused around control, many still did not even think of replacing their Jinzo with an Airknight.  Of course, I’m not suggesting Jinzo is inferior in every circumstance.  It just depends.

When D.D. Warrior Lady came out, and was at 3, Jinzo was countered by it.  It gave Jinzo even more trouble in handling set monsters, and unlike Flip Effects such as Man-Eater Bug, the opponent can even use it proactively to force a battle against Jinzo knowing that traps cannot be chained.  With Airknight, you can +1 in most cases, no matter what you attack.  Even if you attack into a DDWL, you either break even or profit in card advantage.  And the opponent is far less inclined to ram DDWL into Airknight themselves unless they’re desperate.

During the Chaos formats, in which DARK’s were inherently more popular (back when players underestimated Asura Priest and Magical Merchant), it would’ve been sensible to cut out a Jinzo for an Airknight (or even a 2nd Airknight).  Eventually, that’s what players did (and that’s what many do now).  The introduction of Mefist the Infernal General, and eventually the Monarchs presented other options as well.

In Goat format, while Jinzo was viable, he was often sub-optimal.  Jinzo is totally unproductive if the opponent uses Scapegoat (many players run 3 in this format) and just an easy victim to Thousand-Eyes Restrict in general.  With Airknight, you can punish Goats for damage and the draw means that you benefited from Airknight even if TER sucks it up.

Yu-Gi-Oh Brothers of Legend – What You Should Know