Let’s examine the heroes and zeros (or Zeroths) of the last G Booster of…well, ever. 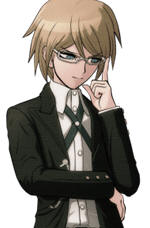 Well fuck me sideways if it isn’t once again time to take stock of the latest in the Vanguard industry’s shiny new toys. And you would hope that in the case of the great series finale of packs, it’ll meet expectations of hype. It’s got a lot to prove at this point: after the last season finale ended on a note more anticlimatic than Far Cry 4, what this pack needs is just enough support to make the main decks of the era somewhat viable and also push Brave, Ritual and ZTB to top tier. Or it should in theory. For many, you’re going to find this too little too late.

So we’re supporting Royal Paladin, Shadow Paladin, Dark Irregulars, Genesis, Nubatama and Gear Chronicle, just to round of the era in time for Union Verse. Or at least that’s the most likely speculation. I for one am just hoping someone important mains Kagero again and Union Verse can suck as much as it wants after that. But as always, how much of it is worth getting and how much of it is just you wasting your time, money and lunch opportunities? Only one way to find out and that’s read. Read on, Macduff.

Royal Paladin: Okay, what Royals got to support Brave isn’t what you call BAD, it’s just that I don’t think it solved all of its main problems. Chaos still craps on it, so really I think this would only work on a local level. It addressed some points though, having a new Felax with Resist for example so Kagero that isn’t Overlord can’t kill everything immediately. Aside from the commons, which can be mixed and matched with Felax as the mainstay, rarer Brave cards include new Altmile, and one of the 2 Grs: new Fides. Get those obviously, along with the new staples like the RR Heal Trigger. All in all, you can at least be assured that almost all the Royals in here aren’t going to be entirely dead, but the deck got these options a bit too late. The meta will still make it struggle.

Get it for: everything with Brave, Remedy Angel.

Shadow Paladin: Thoroughly uninteresting to talk about, but that’s not to mean bad. Again, I don’t think this will be meta as long as Chaos is kicking about, but at least it took time to iron out some flaws. New Luard doesn’t need a field to work with anymore, Dragabyss is another good retire option and column-former…but aside from them, just about the only other cards worth chasing are the RR Heal and Slap-tail Dragon. I guess you could try Fuamnach if only because it gains Resist, and you can mix and match the rest of the Ritual support as you please, but the above mentioned cards are the only real changes as the deck functioned perfectly well without. New Luard also makes Ultimate Stride easy, so if you’re planning to run Gyze, pick them up. You might as well. You fucking madman.

Dark Irregulars: Holy shit, this round of support just got epic. A lot of it is just filler, like the rest, but I would say the RR and above picks are among the best this set. Balaam provides yet more guard sealing and Drive, new Scharhot has so much toolboxing thanks to fetching cards from the soul, and I must admit that on their own they wouldn’t be that interesting, but when combined with Dust, one of the ZRs you can pull this set, this just became an absolute monster deck. This does however require that you invest in DI from the beginning as many of its important pieces got no reprints this set, but if you jumped on the wagon earlier you’re going to love the toys here. I wouldn’t bother picking up Gastille: its best targets can simply be drawn into and you just want the guard sealing combined with Dust. Just run four Steeped in Sin and four Advances to Dawn Scharhot if it matters so much. 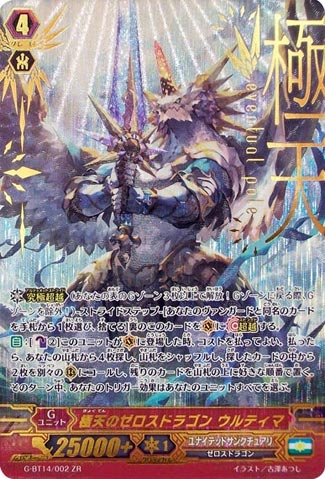 Genesis: There is some token support for Revelation, so if you’re still running Amaruda go for it, just keep in mind that it solved none of its problems and can probably be safely disregarded. So let’s talk about the Regalia support hogging this booster. On one hand it means you can build an entire Regalia deck from the ground up as everything you need aside from triggers and maybe some of the older G Regalia can be found this set, but it does mean that you can kiss any Witch or Fenrir support goodbye at your expense. Obviously a large bulk of it is filler jank, so I’ll just list the chase Regalia at the bottom along with the more generic G Units. So really, if that’s your aim, you can’t go wrong this set. But if you play any other Genesis deck then you can go eat shit.

Nubatama: Only a small pool of support this set, which is just as well, since you’re only making some minor edits. There’s new Shiranui and the new 4-of G-Unit Shiranui Rinne, as well as Sadatsugu to replace Genkai, and Ayagiri to replace Seizui but aside from that the main skeleton is pretty much the same as before. That’s good for you Nubatama players in a way as that means you don’t need to do too much hunting.You don’t even need to have that many of the new Shiranui as Oboro is still the main ride, but how many you get depends on how much you like G3s with skills on RG circle. You may have noticed that this set is streamlining the keyword support while ignoring legacy decks: that’s a recurring thing this set, so if nothing else it means purchase options got a little easier.

Gear Chronicle: As you probably guessed, it’s all about Zodiac Time Beasts. As if they weren’t already good. Mostly you’re just looking to replace cards to give the deck the consistency it needed, replacing regular Chronojet (if you run it) with Chronojet Z, Dran G with Dran Z, and shoehorning in Chronovizor and the new G Guardian (which you probably can, since Groovy and Nextage will be right out). One or two of them support Chronofang and by extension Demiurge, but they should only be picked up if you’re incredibly weird or a hipster, but that’s kind of impossible since there are people who ran Chronofang at the start. And you can’t say “before it was cool” because Chronofang was NEVER COOL.

Zeroth Dragons: Ultima and Dust are proof positive that Meggido and Drachma were just undercosted ‘what if’ cards too expensive for practical use. Not so in the case of these two. Dust fits in every Dark Zone deck because the nation is all about soft advantage and can probably kill the opponent the turn it appears. Scharhot with all the G0 guard seal on RG circle will love him, as will ZTB with its chain attacks. Ultima’s a bit trickier and should only be picked up if you’re stubbornly sticking to a US deck against all sensibility. But if you must, the new Luard helps and Gavrail Prim will love Rescue checking Ultima’s stacked Critical before the Drive checks the Stand. Gyze? I have an entire article dedicated to him and I still don’t recommend that sacky bugger. On the plus side just pulling him will make you your money back, so if you wan to chase it, go nuts. I just hope you’re prepared for the undying hate when you do.