To the yin must come the yang, after all. We’re counting down the worst cards in the last 3 and a half years.

Hey ho, howdy! We’re kissing the G Era goodbye, but before you all go crying to Premium because you vastly prefer the lie that you still want your overpriced and overpowered bullshit to have any actual fun, don’t go thinking I’m letting you off, because we’re here to count down the Top 10 Worst Cards of the format. Can’t have pleasure without the context of pain to throw things into relief, after all.

Just to be clear, to qualify for the bottom 10, the card must be thoroughly uninteresting even when it was new, have made no REAL improvements competitively since then, and have no real hope to now that Bushiroad isn’t making ridiculous OP bullshit anymore. So with that in mind, let the bile and hate flow as we make like Diaboromon from Digimon and learn to count backwards from 10!

Tenth Worst: Just to demonstrate that I can at least shunt personal feelings aside, tenth worst is for my main clan, Kagero. Please step up, Supreme Heavenly Emperor Dragon, Dragonic Blademaster “Taiten”. I mean, for a GB2 you would expect to at least be able to blow up more than one thing, unless you deliberately fluff Mustafa or Vortex Desire, but fuck that noise. Root Flare gets around Resist. Root Flare does not cost 1 Counterblast. The Extra Critical may as well not matter if the opponent’s savvy and you run 12 Critical. I mean, it’s entirely possible that there are in fact worse cards out there than Taiten, but in all honesty, I forgot they exist, although you could then argue that just makes those cards actually WORSE THAN THIS ONE.

Ninth Worst: Technically, I shouldn’t really give an entire deck archetype the boot because were I less restrained, that would just mean this list needs to be extended to the Bottom 50, and at that point I may as well just fucking kill myself. Chronofang Tiger was billed to be the main rival to Chronojet Dragon but had basically nothing that made Chronojet actually good. Aside from ease of Striding, it had no bullshit Time Leap abuse, as least not as well as Chronojet, it has no re-standing Vanguard to call its own, most of its best tricks have to be cribbed from Chronojet, and it still seems to want to +0 hard wash in advantage to get rid of rear-guards. Might as well just be sold off to private owners in the US, like most of the tigers in the world.

Eighth Worst: Okay, in all fairness, quite a lot of the Fighter’s Collection G Guardians could make it on here for how underwhelming they are, but at least they promise to have some specific niche to fill. So what does it say when a G Guardian that’s lower Rarity comes along and outclasses you in defense and hard advantage? It makes you wonder if they actually coordinate card design over in Japan. But that is exactly what happened to Persevering One, Lozenge Magus Apex. Magus seems to be deader than my prospects of my antelope helicopter business getting funded outside of Premium Format, it’s all about Battle Sisters and their decidedly better G Guardian. If you actually decide to run GB8 Amaterasu and run this to rush to her, you deserve nothing but SHAME.

Seventh Worst: It’s Dragdriver, Luard. C’mon, this one was reasonably obvious. You only ever ran this just to have something to combine Luard’s Stride skill with somehow, and now Dragfall is a thing this does nothing except prove to the latecomers that the TCG model hates their fucking guts, and the veterans that they were entirely right to just run Spectral Blaster Diablo instead. I suppose they made this on the basis that players were only looking to be pure and wouldn’t dare hybridise because it would encroach on their theme/aesthetic/waifu, but you underestimate just how pathetic we as players really are, Bushiroad.

Sixth Worst: One of my local players happens to main Pale Moon, and I can basically recite what’s going to happens as soon as he Strides into anything. Call Paratrooper from soul, call something else, call Cat Knight, call Peryton/Paratrooper, call something else. So basically, what need have you for G Units that call during Main Phase other than to fill a void? A question worth considering looking at Carnivorous Megatrick, Prana. The redundancy is real with this card, and as long as you run a good deal of searchers and/or soulcharge reasonably often, you’re not going to starve for choice. As first Stride, you -1 for shit you don’t keep on the board, and second or above you’re just emptying soul by bouncing them to hand, when all that Murakumo-esque shenanigans means your hand should be large enough as it is. I thought something like Pale Moon would wise up to the idea that one or two good tricks doesn’t make a show.

Fifth Worst: I’m someone who prefers soft advantage if I can get it, as you know. Might be hard to agree when I main Kagero, but there’s a reason I main something where restanding vanguards are king. So when you fuck even that up, you know I’m not going to go soft on how shit it is. I wasn’t particularly kind to Mythical Destroyer Beast, Vanargandr when it was first reviewed and I’m not prepared to change my mind. If I wanted to pay Soulblast 6 for random soft advantage that isn’t even very good at its best, I could have just played literally anything else where huge columns are a speciality. Seriously, it’s like the balance was being overseen by someone whose own balance was fucked up by their parent being a starfish or a primitive snail.

Fourth Worst: Zeroth Dragon of Death Garden, Zoa. Oh look at all the fucks people didn’t give about this as long as they had Perfect Guards to spare for days. In the era of re-useable Perfect Guards, this just didn’t take root. And that’s a pun that only works for one of the Zoo clans, which is annoying. V Series gives us reboot Phantom Black to maybe make this a bit more useable, but speaking entirely from a G perspective, this thing was just an overly expensive waste of time, but hey, that’s the nature of children’s trading cards. Maybe if you wait long enough it’ll go from ‘shit’ to ‘garbage’ to ‘a waste of money’, and maybe if Vanguard lasts long enough,it’ll finally graduate to just being ‘bad’.

Third Worst: If I had to criticise Bermuda Triangle for anything, it’s that they spread themselves far too bloody thin, trying to support every goddamn archetype there was and just not having the sense to let certain things die with good grace, not unlike The Simpsons. Duo Amazing Sister, Meer may not have received as much scorn from me were it not for the fact it is literally the last of the G support, not including promos, and now it’s too late to give Duos anything better. They’re stuck trying to play a hard advantage gambit that really should have been cut in favour of something better.

Second Worst: Talking of being too late to make a little less shit than before, for similar reasons as Chronofang Tiger, I’m putting Blue Wave Marshal, Valeos here on my second worst list, not because it’s the most objectively terrible thing to exist, but because his support was so bloody close to being an actual relevant thing, but now they’re stuck, forever being reminded they didn’t stick the landing. If I wanted a Stride based Aqua Force Deck that didn’t require I run the most trivial and unhelpful bollocks for the sake of name, everyone knows Thavas is where it’s at. And even then it’s not THAT great as long as Chaos Breaker LOOMS over its head like a cloud made of tapestries.

Absolute Worst: It takes something truly AWFUL in order to make it to number one. Sure there’s a lot of crap commons and token RR cards, but I’m specifically reserving this list for cards that were supposed to say it all about their state of play, which, when this came out, turned out to be “buy our shit so that your budget build looks slightly LESS pathetic! Until then enjoy your crappy-ass deck! Don’t think too hard about when we’ll actually fix it, it might be never, but you’ll hope anyway, you dumb fuck!” I’m talking of course about Interdimensional Dragon, Mystery-flare Dragon. Four bloody Counterblast to be left open after OG Chronojet’s Stride skill, or else you had to fork over for 4 Chronoscommand and 4 Ragnaclock just to make it go anywhere. It was absolute shit-gravy from the moment of conception and if anyone actually succeeded in getting it off they were either cheating to frankly absurd levels, or they’re playing on CFA where stacking is done for days. And days and days and days. 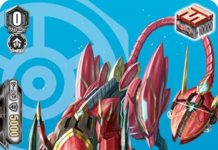 The Reboot’s Opportunity To Learn Nothing – Cardfight