I will probably fuck myself with a rusty spork if I agree on set rotation again, but here we are.

So once June hits, we’ll be able to decide for ourselves whether we wish to be slaves to the perpetual money-machine that is Standard, abandoning all that we knew in favour of a reset, or if we wish to cling to our old edition like a drowning man to reeds and play Premium. And as much as I would love to live the thrifty lifestyle and encourage people to save money by playing Premium, I’m going to swallow my pride and what thoughts in my frontal lobe – and recommend you play Standard.

Yes, I know, the TCG model is an absolute dick move. Yes, I know companies don’t need to power-creep everything just to keep customers hooked. But let’s step back and think about this. If, like me, you have followed Vanguard long enough for you to reach this point (it doesn’t have to be as early as me, you just need a few years under your belt), you must have at least been willing to spend so much of your money just to keep up some sort of facade of skill to your peers. I will wager good money that your deck doesn’t bare even the slightest resemblance to the deck you started off with, not even if you stuck with one clan for years: I only have to compare my October 2015 The X deck to my modern Overlords of 2018 to notice that nothing in my deck’s the same, not even down to the triggers.

The point I’m trying to make, I suppose, is that if you were willing to overhaul your entire deck, functionally, how is this any different from having to move to an entirely different format of entirely different cards? Yes, it’s an admittedly aggressive schedule acceleration for some, but really, it’s not all that much more expensive than cherry-picking the best of a clan. You just need to shell out a little more for commons. Not even that if you’re habitual bulk box-buyers.

“Oh,” but I hear you say, “Premium allows us to do so many more things and gives us all the clans to work with and there’s more complex interactions and…” Well, okay, fun is relative, I get that. I’m only speaking for myself personally as I type this. The problem is that I don’t particularly like the G Era (or at least, I don’t like the direction it went in after a year went by and we got settled into a routine). Oh I enjoyed it enough to stay while it was still happening, but now I’ve had a chance to step back it struck me as unneeded. I myself still think we could have a game that functioned as old Vanguard and did and still be interesting as long as we introduced more interesting cards without making them strictly better than the old ones. I guess that’s what appeals to me the most about Standard: a reminder of a somewhat simpler time. I enjoyed Vanguard when it was akin to a chess game: everything could be predictably tracked to a reasonable degree, you could plan ahead and hard advantage wasn’t horribly skewed compared to soft advantage.

You know it’s true. Overlords only really have relevance in the G meta because they can bypass Resist and can still fall back on soft advantage either through the Purge or Ziegenburg. If Kagero had continued in the same vein of retiring, even if it was reasonably cost efficient, it’s all for naught if the opponent can just get it all back and then combine it with a better gambit to overcome yours. In an era when you kill the opponent by the second Stride, it just becomes a contest of “who has the most bullshit”, because aside from certain cards, the opponent has no way to respond to anything you’re doing. There is no Buddyfight-esque Counter mechanic. It’s just letting the effect happen before you can move on to the next step. Standard at least has the advantage of letting your gains add up over the course of several turns as opposed to pushing it all into one turn of complete bullshit, which was what I enjoyed about old Vanguard. You know, before Crossrides. 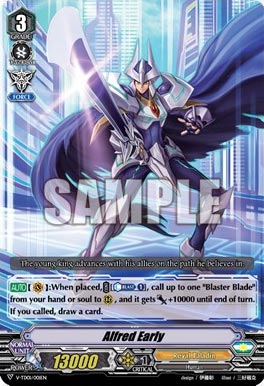 And this is my biggest problem with Premium Format and why I’d rather have Standard: Premium is only appealing on principle. People only seem attracted to it because they still want the cards they want to be relevant. No-one likes the idea of the sunk cost fallacy, which will need to be confronted if they want to keep at Vanguard. The idea of having the entire library of cards at your disposal is all very well, but it’s all for naught if players can simply pick the BEST possibility and just roll with that. I mean, Premium doesn’t look fun from where I’m standing as far as Royal Paladin is concerned: they unrestricted Barcgal as a starter, so you have an unfair resource advantage regarding soul, ride consistency and just hard advantage generally. Do you remember Undulatory Sage, Tarna? Well imagine him with Alfred in Premium. 10K to a column of your choice that you don’t even need to work for. Every time you call this fucker you automatically get a Force Gift that the opponent cannot remove and one free soul. You then stack with with checked criticals to give Blaster Blades ridiculous numbers, abuseable with Floral Paladin Flogal. Before taking Stride into account. Sure, there’s no Stride skill, but that’s pretty still bullshit as far as Turn 3 goes. So Premium won’t be all that fun. Or at the very least it won’t START as fun.

What’s more, Standard cards operate on a completely different metagame compared to old cards. They must scale for a 13k meta, G operates on 11k. Triggers grant 10k in Standard, G only has triggers offering 5k. The shield values as NORMAL are totally different too: Grade 1s have an expected value of 10k shield, and triggers have upwards of 15k (assuming you don’t run Draws which are just the worst). So already I’m seeing that even something like Thavas, who assumes the opponent is on 11k, won’t enjoy Premium very much, which is bad when his best tricks are restricted to a Thavas Vanguard. You’d have to muddy by on Maelstrom (when he comes out) and squeeze what use you can out of his Blue Storm support of old.

G Era was just full of stuff that was over-designed, which I think people are mistaking for complex. Standard puts more of an emphasis between interaction with the players because everything is somewhat simplified, whereas in G you only gave a shit about your own combos because they couldn’t be stopped, save for specific pre-emptive counters. That still doesn’t mean I’ll sell my old Kagero stuff. I mean, give it until November when G won’t be a legal format anymore. Maybe there will be a place in my heart. Unless they release cards that support Premium exclusively, in which case fuck you with a spork.