The reboot was probably for the best, but there’s always room to fuck it up. So June 8th is when we finally get to Standard Format with the release of the Trial Decks, overhauling pretty much everything that we knew. I have to be honest, I suppose I shouldn’t have been surprised that Bushiroad were going to force us to invalidate everything we had. A part of me even sort of agrees: I don’t really enjoy the thought of Premium Format because I want my game to be simple, yet not degenerate again. Yes, I am aware fun is subjective, but it’s Vanguard. Its fun seems to be more subjective than others. And what I consider fun are simple gambits stretched out over several turns, not bullshit packed into one turn with no fun to be had before.

But even with this reboot in mind, I know that there’s always room to completely fuck everything up, and given it’s Bushiroad, fuck up they inevitably will. If they take this reboot and then proceed to take it in the same direction as the old series, warts and all, then they have learned absolutely nothing. I know no-one at Bushiroad gives a shit about what I type, but I’m typing it anyway for piece of mind. And to generate more shit for Pojo.

First of all, restrictions. No, not the list, we’ll get to that. I mean arbitray locks on abilities. I think that the game as it is in its infancy is looking reasonably solid, few card choices aside. I do not, however, want the game to degenerate to a state where certain plays in the game only become possible as soon as you’ve met certain requirements. I do not give two shits how you intend to dress up Limit Break or Generation Break, they are what they are: toys being held out of reach until you’ve been a good boy and eaten all your vegetables. Or the opponent has eaten all of theirs. They are restrictions, not abilities. Such loopholes have been exploited by assholes, myself included, which is why cards such as Sebreeze had to be made at all. Gifts won’t be the only mechanic of the Standard Era, I’m sure, but I certainly don’t want the new shit to make us give up our interesting early turns just for that.

I think however that this lesson actually was picked up by Bushiroad, with cards like Chaos Breaker Crisis, Gredora and similar being able to proc on-ride near the end of the G Era, so they don’t have to get shat on by old-format Seven Seas or similar. As long as they keep this up and allow players to do things no matter the stage of the game, with no strings attached, we’ll have more fun overall.

In Japan, they’ve also announced a Restricted List for Premium Format, and it’s springing Barcgal out of jail at long last noteably but also preventing Purple Trapezist and new Jumping Jill from being in the same deck. Normally what the fuck goes on in Japan competitively is as relevant to me as the moons of fucking Jupiter, but it does at least provide academic discussion, so I’m discussing the shit out of it. Now, I do understand why we have lists. It’s to prevent degenerate combos, especially in a game where we lack an option to respond to whatever shit the opponent does. This actually rather neatly brings up another topic I wanted to talk about. I also got the news that the latest Standard Extra Booster will have reprinted G Units. Now, as they are only that: reprints, I am not too fussed, but I would strongly dissuade Bushiroad from releasing cards with the express intent of supporting Premium Format. I don’t imagine why they WOULD: it doesn’t make sense from a marketing standpoint, especially when they want to wash their hands of the G Era, but Premium, fact remains, has the largest library of cards. Naturally it will invite others to explore, if only because they’ll operate on the basis that a broken clock is right twice a day. I myself would prefer that the game be kept simple, so I’m probably going to stick to Standard. It’s like technology: I only want to go to the store once, so if I wait, I can get the cool shit as it was meant to be first time around. 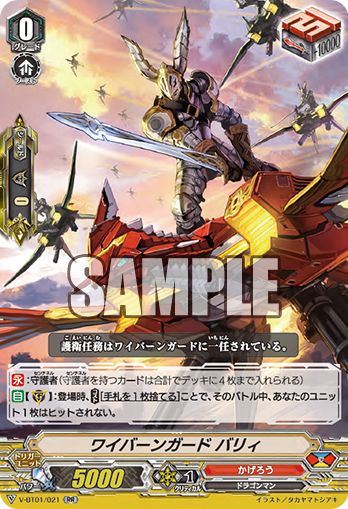 I can however already see that there are several other aspects they haven’t fixed with the reboot: the Draw Triggers. They haven’t changed them at all, aside from the power increase they grant. They’re still 5k shield, and now that the reboot is offering more shield value to the units as standard (seriously even 8k Grade 1s are 10k in shield and can still have a skill) Draw Triggers are actually even WORSE than they were before. Relative to format anyway. That basically means that once the Sets expand and Kagero no longer needs to run 8 Critical, 4 Draw, 4 Heal, you can bet your bottom dollar Draws will be the first thing I cut. Again. Bushi appear to have learnt this lesson and rather cunningly stopped releasing support quite so often, the bastards.

Well, in a vaccum, anyway. Rather cunningly Bushi re-purposed some of them into Perfect Guards, which I’ve got reservations about. It’s less that Bushi are making Draws actually useful to some degree and more for what it represents. You inevitably know some stupid fucktards are going to run 2 of each (2 Draw PGs and 2 Regular) to ‘answer to whatever guard restrictions there are’. In fact, there’s a good chance I just referred to you as a stupid fucktard just now, didn’t I? I’m not apologising for it, FYI. Unless you can search for either copy at leisure (so that just leaves Premium with Conroe) then pick a fucking camp and stick with it for god’s sake. Not running something important at max copies when you can’t search it is mathematically wrong.

I mean, if you’re going to go down this route you might as well include some sort of clause calling for mandatory Draws. You might think that’s oppressive. I would say it’s the job of the folks in charge to make sure what your idiot decisions don’t ruin you.