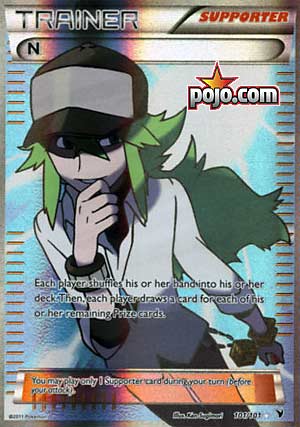 Another late card review from me, this time is the Supporter named N (BW Noble Victories 92/101 101/101, Dark Explorers 96/108, BW100 Promo, Fates Collide 105/124 105a/124)! It’s actual full name is Natural Harmonia Gropius. A former would-be Team Plasma king who used to believe that people and Pokémon should be separated, the player character finally convinces N that they can be together, thus making N explore the region even further, opening up many possibilities.

But this is the TCG that I’m about to talk about (sorry for being sidetracked from the video games), and this effect……..has been seen before, from Rocket Admin (Team Rocket Returns 86/109). It makes both players shuffle their hand into their decks, then draw cards equal to how many prizes players had left. This card has been reviewed three times by the Pojo crew: November 14, 2011 as a regular review, January 2, 2012 as the fifth best card of 2011, and August 6, 2015 as the second best card lost to rotation. Most of these reviews were very favorable, some proclaiming to be the second best draw Supporter card.

N does open up several possibilities depending on the situation. It also creates psychological welfare; players tend to assume the inevitable as to whether or not they should play it or expect their cards in their hand to be shuffled on the next turn. Early game when neither prizes are taken, it is a good shuffle based draw like Professor Oak’s New Theory or Cynthia. Eventually, when the game progresses and several prizes were taken, the draw power becomes lackluster. Even so, we use N in a different way. If either player are about to take the final prize, then the winning player will suffer with having a small hand from the losing player.

In many games where almost every deck uses N, I have been helped or hurt by myself or my opponent when using N. I either get a good hand or a bad hand. Either scenario can even determine the outcome of the match; having a bad hand means you can’t do much and having a great hand could give you certain combo pieces to win you the game.

N will continue to see play but has to compete with another shuffle based draw supporters that we recently received. Cynthia is another shuffle based draw which gets you six cards regardless of prize count and you don’t want your opponent to get a fresh hand. In Limited, regardless of expansion, since you begin the game with four prizes, you only get to draw four cards at most.