The Yugioh community separates Goat format into 3 categories from earliest to latest: (1) Pre-Exarion Goats, (2) Exarion Goats, and (3) Goats with both Exarion and the booster set Cybernetic Revolution (CRV).  The vast majority of the original 2005 Goat format was before Exarion and CRV.  However, players today are able to look at and playtest the short tail-end of the format with a larger microscope nowadays. 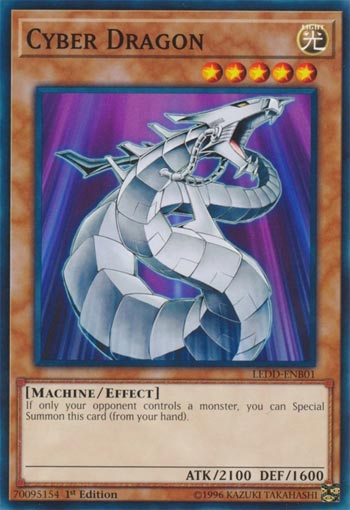 The time period between the legality of Cybernetic Revolution and the arrival of the next ban list (which would create the next format after Goats) was not even a month.  SJC Boston (Sept 2005) was the one major event where it was tried out.  Some players splashed in a Cyber Dragon or two, but otherwise, many players decided not to main deck it at all.  Cyber Twin Dragon (unfortunately) enabled more OTK’s with Metamorphosis and BLS Envoy.  Burn decks benefited from 3 Dimensional Wall.  Drillroid and Steamroid were playable.  Most of the other CRV cards were garbage.

The players at SJC Boston had the right idea but perhaps the wrong answer.  Yes, Scapegoat and Cyber Dragon were in conflict.  But was Scapegoat the superior choice?  Players, at the time, didn’t realize how powerful Chaos Sorcerer was and how Cyber Dragon was the perfect card to bolster dedicated Chaos decks.  Dedicated Chaos Decks needed more LIGHT targets, a fast way to get a LIGHT into play so that Chaos Sorcerer can be fueled sooner and extra muscle so that the player doesn’t have to rely on Sorcerer alone for high ATK.  Additionally, Recruiter Chaos builds were able to summon Cyber Dragon, summon a recruiter, use Creature Swap, attack the Recruiter with Cyber Dragon and summon a search target from the deck for epic plussing.

CyDra Goat format still needs far more testing and tournament data before any accurate meta could be established, but Goats will definitely have strong competition in this format.

Yu-Gi-Oh Structure Deck: Cyber Strike – What You Should Know

Yu-Gi-Oh Dawn of Majesty – What You Should Know