Winning some other way is lovely on paper, but poorly executed in practice. I realise that Rondeau of Chaos and Salvation is not for a while longer, but I just wanted to pump this out. The recent support for Omega Glendios rubs me wrong. This not down to any personal grudge of mine, it’s more to do with the nature of the game as a whole.

Alternate win conditions, as an idea, are fine. It’s a way of getting people to be more inventive in terms of deck variety, not just in end goals, but also in setup. But this where it all falls down for me. Alternative win conditions should only be introduced if the deck itself cannot win in the conventional manner. And truthfully, with the new support, Deletors’ Eigorg and Star-Vader’s Omega Glendios don’t fall into either category.

Glendios when first introduced competitively didn’t even TRY to World End anyone: they just used the columns and the occasional Lock to swing the opponent’s ass into the floor. Attaching the same clause onto Glendios’s G-Units to allow Reverse units to bypass Lord would have been perfectly fine. The deck would then still be beatdown with an otherwise conditional skill added on: winmore, but could be reasonably played around.

At the same time though, I’m glad that these two are at the very least the ONLY alternate win-cons the game has, because trying any other traditional channel would definitely break the game. The reason that we don’t have ‘Burn’ or ‘Mill’ decks in Vanguard is because they completely go against what Vanguard is about. In Vanguard, it doesn’t matter how much power is piled onto a unit, each attack will only do one damage. At the same time though, having a fixed amount of damage set means that if a deck could consistently achieve a burn strategy of damaging the opponent without needing (or worse, working in conjunction with) attacks, would completely break the game. You would then have to introduce anti-burn cards for every deck just to counter such a strategy, because Vanguard very rarely punishes opponents for attacking: the exceptions are control clans, generally, which is their main thing. Except there wouldn’t be any need to introduce such things if they just didn’t make Burn a thing at all. So any card that does, like VMAX, tend to be restricted to Late Game and carry a big cost or requirement.

Milling carries very similar arguments: like Burn, milling is cheap. After a player reaches Grade 3 and can Stride, they are shaving 3-4 cards from the deck every turn, more if they carry a re-standing Vanguard, is a deck that removes cards from the deck, or even both. And like Burn, every interaction cannot be stopped in Vanguard, only pre-empted. If you introduce mill, that’s just another cheap way to win, working in conjunction with the regular way of winning, which is unnecessary. You can make a play CAUTIOUS about attacking, but inevitably the only direction to go is forward. No attacking would mean no damage, and thus no way to win. By making damage the ONLY way to win makes the game fairer.

With conventional games involving a Burn or Mill strategy, like Yu-Gi-Oh!, any deck employing them are decks that don’t work to attack at all. It’s down usually to how those sorts of games carry penalties for attacking: heck, Buddyfight, another of Bushiroad’s love-children carry traps and shit to block and destroy attackers, as well as a life system that doesn’t run on fixed damage, so such strategies are acceptable. Burn vs Beatdown is basically a game of bloody knuckle. Neither can win by switching to the other strategy, or at least, it isn’t supposed to until near-death when it’s time to wrap up. This would never work in Vanguard. It was designed from the outlet to be simple and exclude other factors, so overcomplicating things would break its design. 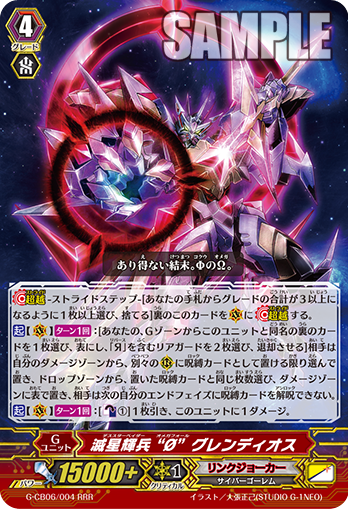 But back to Glendios and Eigorg. Both of these cards were designed to be restricted to Late Game: Glendios needing its user to be on 5 damage, and Eigorg requiring the opponent to be on 4. So they are at least better balanced, requiring its user to play the normal way at first before dropping these admittedly difficult conditions on the opponent. But it still doesn’t detract from the fact that both skills are winmore. Okay, yes, both of Glendios’s G-Units are deliberately PUSHING the alternate win-con but still. I guess it goes back to that article I wrote about how you should quit bitching about a card or deck simply because you can’t beat it, and yes, both these decks can be played around. It all comes down to a strategy I have been advocating for a good 2 years: non-pussy play.

One thing I noticed about Omega Fall Glendios was the fact that it needed 2 Reverse Units to retire as a cost. Consequently, to get the skill off with any reliability it would have to actively hoard and search such cards, but it would be directly at the expense of early defense, since they are Grade 3s and thus useless for defending. Therefore, the Glendios deck needs to be rushed, arranging checked Critical triggers in such a way that the opponent doesn’t get to be on 5 damage. I would just throw everything at the opponent’s Vanguard until 4 damage, and then spare a G Guardian to unlock GB2 restricted Glory-skills if you happen to have one, like Nouvelle Vague L’Express to fuck up Rubidium. You could even knock them to 5 if you’re reasonably confident Perfect Guard and Rubidium seal would end the game there.

Don’t take this as me advocating similar strategies in the near future. I’m just saying that the game could and should happily survive without needing to over-complicate things. It is entirely possible to devote the game to other interesting strategies without needing to screw design. It doesn’t even need to power-creep shit out of obscurity either. Booster Set 4 had crap-all, but people liked Shadow Paladin, so it sold.

Seriously, if you make either Glendios or Eigorg easy, Bushiroad, you can fuck right off.