If you have to run crap for the sake of the name, just consider that the strategy itself is crap. Reading up on the finished spoilers for the Star Gate Extra Booster, it got me thinking about a rather concerning problem that has escaped some people. Namely, that archetypes these says are intent on shackling us to names for the sake of so called ‘consistency’.

Please keep in mind that I don’t mean archetypes like Overlord, who only really give a shit that the Vanguard presently is an Overlord as far as skills are concerned, and that you take or leave pretty much the rest of it. No, I’m talking about archetypes such as Blue Wave, particularly the new support that came out last December.

Archetypes made sense at first, back when Vanguard was still at its most basic level. By restricting skills to only a certain cardpool, certain aspects could be enhanced. This was still power-creep in its worst form but it was still manageable. Now, I’m not sure that it really makes sense anymore. With Stride, the Vanguard won’t be doing the same job every turn and resource management has become more important than ever. Before in the BT10 days you could go until Late Game without Counterblasting anything until the last turn and you could still win (Descendant springs to mind here). And with big flash plays comes problems with consistency. It doesn’t even have to be a chain of combos as long as the wait for Duke Nukem Forever (with equally disappointing results I would imagine). It could simply be that you just get locked out of what a more generic and probably simpler deck could do.

I haven’t watched a Blue Wave deck that actually worked after the advent of Anger Boil and Tetra Boil. The old one was sort of okay, basically adding the option of a re-standing Vanguard and Phoivos for more attacks. Now, the new Blue Wave is all about what is probably the most toxic thing to happen such a relatively new archetype: restricted resources. I’m not saying that’s bad necessarily: Liberators can get away with it and have done so for years, but Liberators have been around for longer. They therefore have had more time to iron out their flaws. Balan and Blaster Blade Liberator for Countercharging, for example, or just being light on the Counterblasts in general for the more flashy and devastating plays.

It’s a recurring problem for these new decks in this day and age. Chouchou haven’t got anything that recharges, forcing the use of Kukuri (or maybe not even then), Blue Waves haven’t got any aside from Supersonic Sailor (even if their main problem is keeping hand due to so many discards, but still), and Dainexus Dimensional Robos is going to suffer from the same problem. Locking us out of so many better and possibly important generic cards without offering some sort of substitute is the fastest way to sucker idiots into blowing cash on a crap deck with no hope of payoff for at least a year.

I find it particularly annoying, largely because these archetypes aren’t like, say, Perdition Dragons where they got all of 2 Sets of support and then got swiftly forgotten about. Logistically, I know it isn’t possible for Bushiroad to constantly have to introduce new support for every archetype they ever made, particularly if they’re decks relegated to getting supported only once a year. So it makes sense to only prioritise the ones that got the most spotlights shone on them. But still, the least that Bushiroad could do for the ones that come after is make it easier for people to manage their shit. 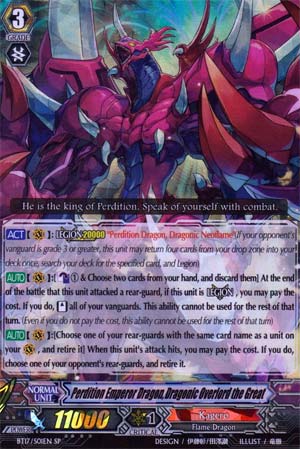 Releasing this many cards for the new archetypes and some of the older and more prominent ones like D-Robos proves that Bushiroad knows they exist. So the excuse that these archetypes are supposed to be crap because it has since gotten powercrept out by better shit doesn’t fly. Machinings don’t run on Darkface plays yet it was able to adopt a pretty competitive identity of its own (even if the deck’s going to go to hell if you ride anything not called Beat Atlas). But if you’re going to lock these sorts of decks to only discarding, Counterblasting and Soublasting cards belonging to its own archetype, the least you could do is offer some way to build that Soul or Counterblast back up. Chaos has Zinc, for example. There. All it takes is all of one card, although since Chaos doesn’t really want for hand it might be the exception.

So really, Bushiroad, if you want the archetype to succeed, a resource recharger is the absolute bare-minimum requirement needed to make someone pick up a deck. Otherwise, it’s just going to result in people asking one question: why would I want to play this deck when there’s another deck that is cheaper, has virtually the same output and is less likely to clog on me? I can’t help but notice that you are still in the bloody pool of rainbow triggers as far as name is concerned. For fuck’s sake, Eradicators and Liberators started with 2 Criticals and there was more than enough space to shoehorn a second one in.

Actually, while I’m on the subject of neglected archetypes, I might as well talk about the ones that kind of push for relevance but in practice are about as useful as a television made from gingerbread. I’m looking at virtually EVERYTHING old in Bermuda Triangleas an example. It is rather salt inducing when PRISMs are pretty much the closest thing to competitive out of Pacifica, Riviere, Coral, Raindear, Duo, and Chouchou. Okay, technically Chouchou and Duo are the only ones that counts under my definition of ‘archetype’, but they suffer from the same problems as everything listed so I’ll just lump them together. These decks just get too few of everything they actually need, similar to Blue Wave. With too many eggs in one basket and only one booster a year to appease each one, they just end up getting absolute shit relative to the meta, save for the ones they intend to push like Lauris who actually has some degree of relevance. What I’m saying is, keep your expectations low when it comes to supporting your old-hat shit. As low as the rankings you finished in at Worlds.