Is it still a pre-review if Mystery Booster has technically been released? I’m going to refer to it as such, because the playtest cards still haven’t been officially released for the full range of general Magic use yet. They also apparently aren’t in the most widely available version of the Mystery Booster, so it might be some time before most of us get our hands on them.

If you want to remind yourself of (many of) the rest of the playtest cards, I’ve done pre-reviews of the other categories of cards: white, blue, black, red, green, and multicolor.

One of my favorite developments from Core Set 2020 and Throne of Eldraine is an increased focus on colored artifacts. This is a very logical one: plenty of Magic’s historical artifacts actually have a possible color alignment, and not just the ones that have colored activation costs. Look, for example, at Slate of Ancestry. It draws cards based on the number of creatures you have – is it possible to be more Selesnya than that? 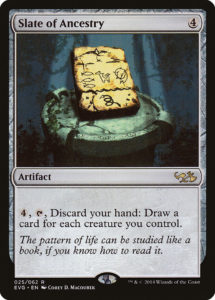 Colored artifacts also alleviate some of the problems we’ve seen in artifact blocks, where the color pie became nearly irrelevant in tournaments and all the competitive decks had the exact same cards in them. It’s curious that people tend to notice this problematic convergence only when it’s the result of artifacts, or notice it only when it’s the result of overly powerful dual lands. Really, we need to address both at the same time.

Having said that, there aren’t any colored artifacts among the Mystery Booster playtest cards. There are some other cool cards, though. 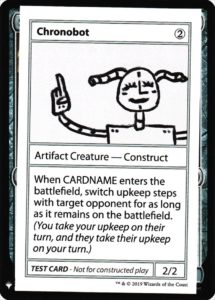 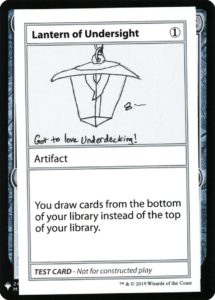 Both of these cards feel like the sort of things that you might see in an Un-set, and seem on their face to be more cute than anything else. Of course, if you’ve been reading our Card of the Day section long enough, you’ll remember that I’ve occasionally said that about cards that turned out to be part of some kind of deadly combo. Chronobot certainly interacts in an interesting way with the vanishing ability; as for Lantern of Insight, in a world with the London mulligan rule, you can know what at least the first one or two are. 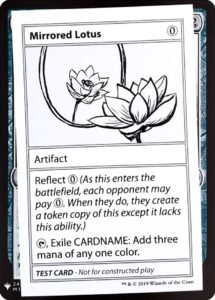 This is one of the most interesting Black Lotus variants I’ve ever seen, and superficially one of the fairest. It might encourage a metagame with a lot of fast decks that can make use of the mana boost, but I could also see a lot of matches where someone leads with between one and three aggro creatures and the opponent responds with an early Consecrated Sphinx variant. I don’t know if that’s more variance than Mark Rosewater likes nowadays. Frankly, I kind of want to see it now. 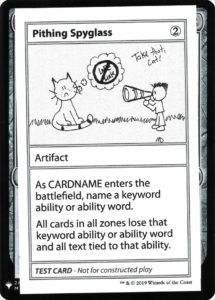 This is another card that I’m a little surprised we haven’t seen in a black-bordered set. It is probably a little confusing for less experienced players and anyone who isn’t sure what counts as an ability word and what doesn’t. I’m sometimes in that second group, to be quite honest.

I suspect that a surprising number of players would play with a “real” Pithing Spyglass: after all, Allies have had a presence in casual Magic for over a decade, constellation decks get out of hand very fast, and the will of the council has reached far beyond Fiora into the realms of Commander. The question becomes whether it’s better to interact narrowly with the ability word or deal with the cards as normal cards. 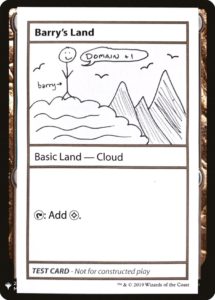 I am a little confused about why Barry’s Land is in the set. Isn’t this literally just Wastes, from Oath of the Gatewatch? Regardless, the fact is that if your group counts this as a legitimate card, your Tribal Flames can deal seven damage and Worldly Counsel turns into Ancestral Memories. I fear that still wouldn’t be enough to make Domain Tribal a top-tier deck. 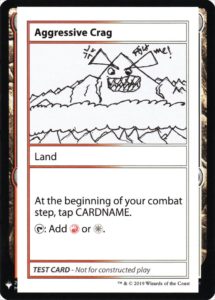 I don’t know how many dual land designs are actually left, so I wouldn’t be surprised to see at least some of Mystery Booster’s in upcoming sets. Aggressive Crag seems fun, it’s probably more powerful than M10-style checklands during early turns, and the only thing it’s really not good for is casting instants. There are even control decks that play on their own turn – I remember a pretty decent one from the era of Rise of the Eldrazi, that went from Wall of Omens to Day of Judgment to Jace the Mind Sculptor to Baneslayer Angel. I personally like that style of deck, but I know it’s not to everyone’s taste; lands like this definitely encourage it. 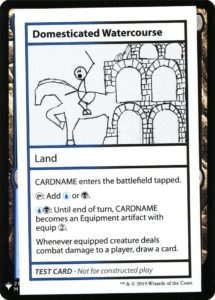 This particular transformation is one I’m pretty sure has never been done in “regular” Magic. It seems to be a reference to the Worldwake creature dual lands, which already encouraged midrange decks; this manages to do so even more strongly. It’s not that creature-light decks in Standard would pass on a dual land, and more that a lot of players like to feel they’re getting the most out of their cards. I am very curious now as to what the rest of the cycle would do as equipment. 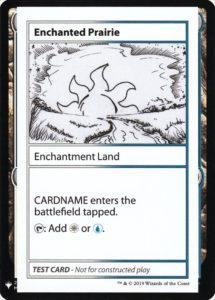 You remember how artifact lands turned out to be too powerful for basically every format? It’s debatable whether an enchantment land would turn out the same way. There’s almost no chance of the designers ever making a card with affinity for enchantments, and in the current Theros sets it would mosly provide a free constellation trigger. I don’t feel enchantment lands are particularly likely, but I don’t think they’re the most unlikely cards to see either. 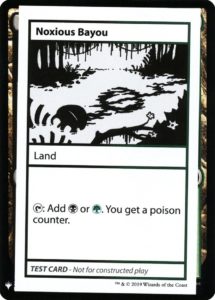 Noxious Bayou is also in a strange position power-wise and in relation to other cards. If there’s a fast poison deck like we had in the Scars of Mirrodin block, it’s incredibly dangerous (and incredibly good in a poison deck that is playing against a non-poison deck). If there isn’t, it’s nearly as good as the original Bayou. I don’t see much reason to go out of your way to adopt it in casual and cube settings, unless you want to make explicitly Mystery Booster-themed decks and cubes. Design-wise, though, I’m curious about what a set that used poison mostly as a drawback would look like. It could ask some questions about how far you are able to go without jeopardizing your ability to win the game, though that might be a question that around two-thirds of the psychographics don’t care about. 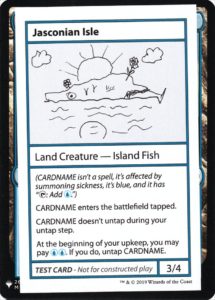 I apologize for breaking the apparent pattern involving the dual lands, but I really like the reference to Island Fish Jasconius. I’ve always had a soft spot for that card, even though it usually wasn’t even strong enough for the janky decks my first group made out of random Fourth Edition boosters and starters. Its art is very atmospheric and it effectively evokes the Arabian Nights.

As for Jasconius’ grandson here, I actually would not be unhappy to see him in a black-bordered set one day soon. Needing to pay to untap him is not usually a trait you want in a land, but two blue mana is more manageable than three, especially in the late game and even in two-colored decks. He also can’t be countered and might be effective in metagames without the Treetop Village style of creature land. 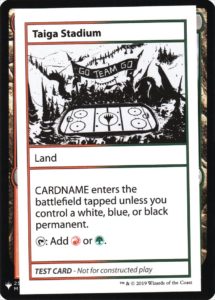 The conventional wisdom is that a card like this is weak in red-green decks because red and green are aggro colors. Maybe that was more true at some point, but it’s actually kind of an oversimplification. Red is a spell color first and an aggro color second – there’s a reason the deck is called “Burn”. Green is about larger creatures than you usually see in speed-based aggro decks and Counter-Sliver style tempo decks. Red-green is actually a midrange or ramp combination, and green’s mana acceleration makes such decks well suited to adding a third color.

Then, of course, there’s the mostly-white, -blue, or -black decks which will hold this in their hand for several turns, then use it to cast Lightning Helix, Ice-Fang Coatl, or Abrupt Decay out of nowhere. I really like this card, and I hope we get a whole cycle of lands like it the next time we visit Alara.

It’s been a long journey, but we’ve reached the end of the playtest cards – for now. I think they prove that Magic has a lot of interesting design space left, and I for one hope we see a lot of these ideas again soon.