This thing we’re doing now? I also did it with a selection of Mystery Booster’s white, blue, and black playtest cards, if you’re interested.

I game with my heart. I do the basic math like aggregating the power of my creatures versus my opponent’s creatures, but never the complex math like the odds of drawing a particular card – what will be, will be. Sometimes I make decks whose theme is “beat down fast” or “have 200 cards in my library”, but then other times I make “Duel Decks: Nobles vs. Peasants” or “Quotes from the Theriad”. I have favorite cards and favorite characters, and often for reasons that have nothing to do with how much I’ve won with them in play. So it’s no surprise that red is my favorite color of the pie.

I don’t feel that cards always show the full range of that part of the pie. In a game themed around combat and warfare, it’s obviously going to be easier to show emotions like anger and desire to set someone on fire. Not all emotions are useless in the heat of battle, either. Compassion might slow you down, but love might make you fight harder. I really hope we get to see more of red’s flavor range in future sets.

Red’s mechanical range, however, has expanded enormously, even just in the past decade. If you look back at Odyssey or Onslaught, you’ll feel like the same phrases appear over and over again. We still get “Shock plus block mechanic” and “Shatter plus block mechanic”, but we also get red cards that do things that 90s mages never dreamed it could do. In fact, some of them do things that we never dreamed any color could do!

And if even some of the ideas in the red playtest cards make it into “real” sets, red is going to be an even more interesting color to play. 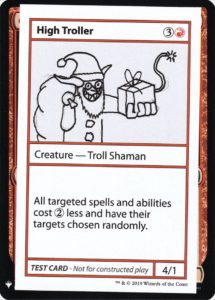 This card seems like it’s just something along the lines of Planar Chaos from Judgment or Grip of Chaos from Scourge: messing with things people want to do just for the sake of it. But in addition to feeling a little more threatening because it’s a creature with a somewhat efficient cost, I wonder if a card like this would make people think twice about using certain kinds of spells. If your opponent is a creature deck with its own removal, will they be reluctant to risk accidentally clearing the way for you? 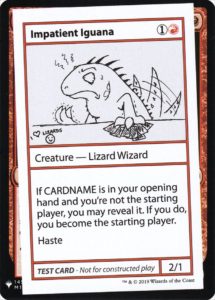 It shouldn’t be a surprise to any of us that aggro decks sometimes live or die based on whether or not they’re going first. A card that potentially guarantees that you’ll always go first would literally change the entire game. Control decks would have to think differently, as they might never again be able to rely on using something like Mind Stone to accelerate into defensive bombs; aggro mirrors could see both players mulliganing much more aggressively than we’re used to seeing. It could be playable in multiplayer and even Commander. My initial reaction is that I’d like to see this ability in black-bordered Magic some day, but it needs to be used with caution. 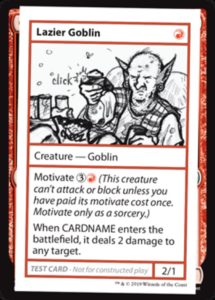 We’re all used to hearing people talk about creatures with comes-into-play abilities as being a creature with a spell attached, but this is more like a spell with a creature attached. It makes the card less of an instant two-for-one by requiring an additional investment and perhaps less powerful than its cousins. It’s interesting to note, though, that unlike the gods of Theros, Lazier Goblin is a creature even when it hasn’t been motivated and still triggers Soul Warden and counts for Goblin War Strike. 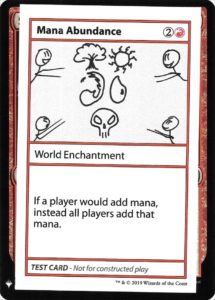 This can be viewed as a variant on red’s long line of chaos cards, or as a way for fast red decks to fight back against mana ramp decks (provided most of their burn spells are instants). I also view it as a reason to ask if Wizards could consider giving us World Enchantments back, even if not in every set. When someone can destroy them with a World Enchantment that’s less powerful, it seems like you have a good way to print some enchantment effects that are a little more powerful than usual. (See also: Problematic Volcano.) 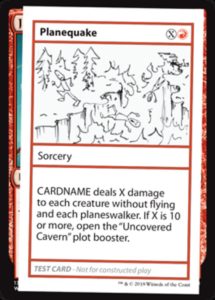 As you probably know, there are similar things in legacy board games where you add something to the game state while it’s in progress, or sometimes change things in one game which carry over to the next one. (See also: Gold Mine.) I am 100% on board for plot boosters – Magic is still quite a way behind other games in terms of integrating its story and gameplay. Consider that Legend of the Five Rings has held tournaments which affected the stories of future sets, and Warhammer Fantasy Battles put the effects of Archaon the Everchosen’s rise entirely in players’ hands.

You might have to ban cards like this in tournaments because the fun of the story might get in the way of counting cards, but that’s no reason to deprive everyone else. 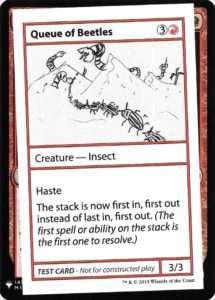 I put this here because even I’m not sure what the full implications of this card are. It’s basically impossible to counter spells with the Queue in play: they would have to target a spell that entered the stack later than them, and I don’t think there’s a way to arrange that under first in first out with any existing cards. You can’t use Giant Growth to save a creature that’s targeted by Lightning Bolt, or use Sensei’s Divining Top to find a response to someone else’s spell. Basically, there’s a good reason why the Great Designer Search tells people not to mention the stack (and they just use something like “Creature spells you cast can’t be countered” for the first example!). 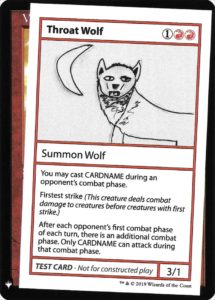 This is one of the longest-running jokes in Magic history. Back before the internet was as widespread and aggressive as it is now, nobody really knew for sure what was in a card set unless Inquest published a checklist. There was a widespread rumor (or hoax) about a card called Throat Wolf which had almost the exact abilities listed here, except that it could attack during the opponent’s untap step rather than their combat step. It was originally supposed to be in Legends, but this became nebulous over time. When it didn’t even make it into any of the Un-sets, I thought we might have heard the last of it, but I was wrong.

It’d actually be a pretty good candidate to get real art and borders in Unsanctioned or future similar sets, as it messes with similar things to cards like Evil Presents or Party Crasher. 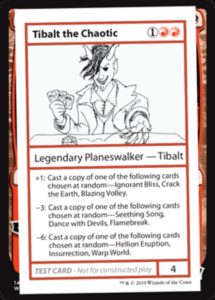 This is a cute card and a fun way to save space, but it’s really more for the “hardcore” audience; you probably can’t rely on everyone knowing what all of these cards do. I’d forgotten what Dance with Devils is, for example. 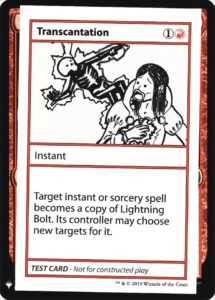 I hate to be the guy that points out that this is actually pretty close to a red counterspell; you might have to accept you’ll get Bolted in the face or lose a creature, but sometimes you don’t care. I suppose you could also view it as Lightning Bolts #5 through 8 in the right kind of deck, if you have some other spell that’s not as useful in the late game. I’m not sure many tournament decks are likely to have that, though it’s worth thinking about.

Next time, we’ll look at some of the green playtest cards, and be pleased that green’s part of the color pie has expanded almost as much as red’s.