I previously looked at some of the white playtest cards, which you can read here if you haven’t yet done so and would like to.

I was around when Wizards of the Coast ran its first Great Designer Search. This was back when I still felt like being a Magic player meant reading everything Wizards posted, so obviously I wandered into the article and dove right in. That was a mistake. Some of the contestants included submissions whose rules text mentioned the stack, and I reacted as though I had witnessed the arrival of the Hounds of Tindalos. My eyes overflowed with non-Euclidean afterimages, and I felt a pain in the middle of my head that seemed to be coming straight off the angles of time.

This was not just me being a snowflake, or whatever insulting slang 4chan uses nowadays to describe people who have actual human feelings. Most of the submissions in question involved phrases like “move target spell or ability to the top of the stack” or “the third object on the stack resolves” (ie. as part of the resolution of this spell). There are much better ways to get around counterspells, like maybe the ancient and hallowed and deceptively elegant phrase “this spell can’t be countered”. There are much better ways to explore blue and red’s affinity for metamagic, like abilities related to granting flash, copying, target changing, and the like. And there are immeasurably better ways of showing your creativity.

I did not have quite as strong a reaction to Animate Spell. That may be because it’s an “official” card of some kind, or simply because it reads like somebody actually thought through what they were writing; it might just be because its placeholder art is cute. Regardless, I actually kind of like it. 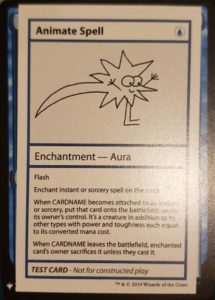 It might be because it’s based on Animate Dead, the original “I’m not sure this actually works, but I am sure I can explain the concept in a way that players will be able to use correctly” design. It’s certainly a unique way of turning somebody’s big spell against them, and I find the image of beating someone down with Warp World quite amusing; you’ll occasionally find that the later time they get to cast it is actually worse than the original time you animated it, but it’s worth the risk, particularly on that class of huge, table-changing sorceries.

I can’t imagine they’d ever print a black-bordered version at just one mana – it offers a similar blowout of the kind you see from Control Magic effects. At least we’ll always get to play with the severely undercosted version in casual (or Cube, if you strictly follow the instructions (but why would you?)). 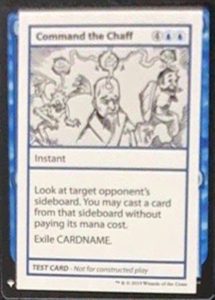 I’m not exactly sure why this is called “Command the Chaff” when sideboard cards can be extremely powerful. It may be that I come from a different era, but I always think of cards like Primal Order, Wrath of God, Magus of the Moon, Phyrexian Arena, and Arcane Laboratory. Perhaps it’s an allusion to possible style mismatches: if you’re a control deck that can generate six mana in blue, an aggro opponent may have more cards that are good against you than are good against them. On the other hand, every deck does have to prepare for mirror matches too, and if nothing else, there’s the psychological edge from turning someone’s cherished tech against them.

I actually think this could work as a “real” card, either in an Un-set (cf. Jester’s Sombrero) or even in black border. There are already cards that reference mulligans and turn order; it might also encourage casual decks to think about the adaptability, or lack thereof, of their strategies. 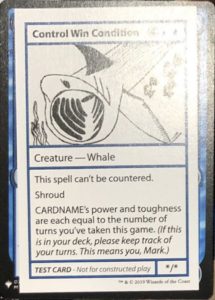 Not that long ago, this card would have been considered to be literally the perfect control win condition. This was before we got used to attacking with Gideon variants – not to mention that abominable Psychic Spiral deck from Return to Ravnica Standard. I’ve seen people say that milling is the pinnacle of control win conditions, because then the deck can devote itself to nothing but answers and survival/prolongation measures. Nonsense. Assessments like that are contextual and subject to shifts in design and player philosophy, like we’ve had numerous times in the past. And personally, I think that design would do well to shift back to cards like this guy here. Shroud and uncounterability give him a certain edge compared to some cards, but he can also be more easily interacted with in play; blocked, sacrified, deathtouched, and such. The whole reason they’ve supposedly been promoting certain kinds of midrange and control strategies (and planeswalkers who aren’t Teferi) is interactivity. The whole reason some people claim they like playing control at all is interactivity! And what’s good for the goose is good for the gander.

This is another card I wouldn’t mind seeing in a black-bordered set basically as-is (though they’d have to make shroud an occasional mechanic again; there’s no way to make him fair with hexproof). That includes the turns thing. I don’t think we’ve had a proper time elemental since, well, Time Elemental. 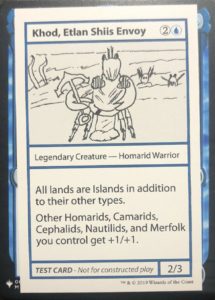 I included this guy because I presume he narrowly missed the cut for Dominaria – Etlan Shiis is an alternate name for New Vodalia, the main kingdom of the merfolk on our home plane. The name is intended to be phonetically close to Atlantis, explaining the existence of Lord of Atlantis in Alpha as reflecting an exonym based on a different pronunciation. I presume our next visit to Dominaria won’t be another twelve years from now, and hopefully this guy will get official art then (are you listening, Mark Rosewater?). 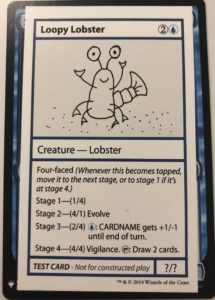 Speaking of Homarids, this guy seems to have an updated version of the tide counter mechanic that some of them used back in Fallen Empires. He has some pretty good stats all around, and has build-around potential centered on Stage 2, because any +1/+1 counters he gets from evolving stay on him in the other stages.

I’m of two minds whether I prefer transformation to be depicted in manners like this or in double-faced cards. From a personal point of view, I only play with my cards sleeved, and werewolves and the like can generate a lot of extra manipulation over the course of a game. The Loopy Lobster style of card can also depict more than just two states. On the other hand, werewolves and other traditional transform cards have space for art and flavor text for both of their states, which is also very important to me and to many of you. Then again, Gavin Verhey’s article about the Mystery Booster product mentioned that Duel Masters has done triple-faced cards, so this whole paragraph may one day become moot. 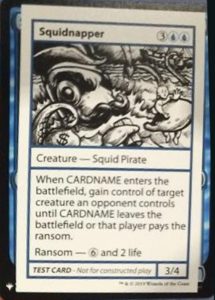 It’s been a while since I last accused Wizards of not doing enough development on blue cards, so I may as well point out that that ransom cost seems pretty high. I guess this is supposed to be a literal playtest card, though. Aside from eyebrow-raising numbers, this seems like a great mechanic for future black-bordered sets – maybe a sequel to Ixalan or some other pirate-themed set? Conspiracy and its political skulduggery? – and gives people a more universal counterplay against what can otherwise be a frustrating mechanic.

For Squidnapper itself, I wouldn’t necessarily rely on him to win a game just by stealing, because the ransom cost is accessible at the time you’ll be casting him. I would absolutely be looking for any way to bounce or flicker him. The damage adds up, as does all that mana not spent on something else. 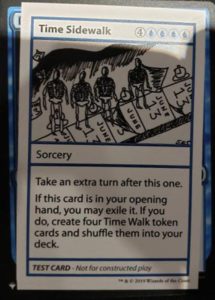 Of all the cards they could use to experiment with spell tokens, they chose Time Walk? To be fair, I think it’s one of the less powerful of the Power Nine in limited, and the tokens aren’t eligible for Regrowth effects. It’s also not quite the slam dunk it initially looks like in constructed: those four tokens will modify the odds of drawing them, and every other card in your deck, by a small but noticeable amount. You might need to devote a higher proportion of the deck to mana sources, and that in turn has further effects on its operation. On the other hand, they neglected to stipulate that you can only do this once, and multiples in your opening hand (whether natural or assisted by Serum Powder) could result in around half your deck being Time Walk tokens. I don’t know how you lose a game where that happens. 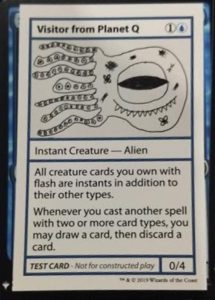 This guy is a reference to something Mark Rosewater used to say, about how he would make Instant a supertype if Magic were just starting now. Frilled Mystic would thus be an “Instant Creature”, Shock would be an “Instant Sorcery”, and Crux of Fate would just be a “Sorcery”. I actually quite like it the way it is now: I like the evocative and intuitive feel of the word “flash”, and I wouldn’t particularly want to give that up just for the designers’ convenience.

It’s worth noting that while the Visitor invites you to put lots of flash creatures in your deck, don’t forget that he doesn’t require it to get his useful looting effect. He works just as well with artifact creatures, enchantment creatures, and Lorwyn‘s non-creature changelings.

In addition to illustrating how anything can be a tribal deck if you try hard enough, this guy also reminds me that Magic needs to do its take on space fantasy or sword and planet at some point. I’m curious how long Jace would last on Barsoom. Judging by the recent novels, though, they’d likely have him turn out to be a great sandworm rider for no reason, and then have an affair with the analogue of Dejah Thoris, prompting Ajani to say “Aye, girl” while grinning his leonin grin. Someone really should look into how they’re writing these stories.

Next time, we’re going to look at playtest cards for the color that we sometimes assume is all about sacrificing one thing to boost a second thing. Spoiler alert: we’re wrong about that.