I don’t know if you guys knew this, but I love Magic’s (usually draft-focused) “innovation” products. Despite the fact that I don’t play limited as much as some people, I’m irresistibly drawn to the innovation part of that sentence. When you’ve been playing as long as I have, it’s hard to be surprised by normal sets – unless they throw us a curveball, like an Arthurian theme we’ve been hoping to see for years and thought might never come. I love the Un-sets and their emphasis on fun and humor, in a game that sometimes plays certain scenarios a little too straight. Future Sight was my favorite set in Standard for a period in 2007 and 2008, though it became rather bittersweet as years went by and it seemed like Wizards had forgotten many of its timeshifted cards. I enjoyed Conspiracy‘s pushing of strategy into surprising areas with Scheme cards and the Monarch concept, and I thought Battlebond did a great job of reinvigorating an unusual form of multiplayer Magic.

You may have heard that our next such innovation product is something simply entitled “Mystery Boosters”. This is a lot less mysterious than it sounds. It’s basically a Wizards-made cube set with a little more randomization in its booster slots than we usually see, plus something really crazy: experimentally-designed cards, made in the style of their internal playtest cards. You’re only supposed to use them in Mystery Booster drafts, but I’m already making plans for casual constructed formats, too. That’s kind of what I do. 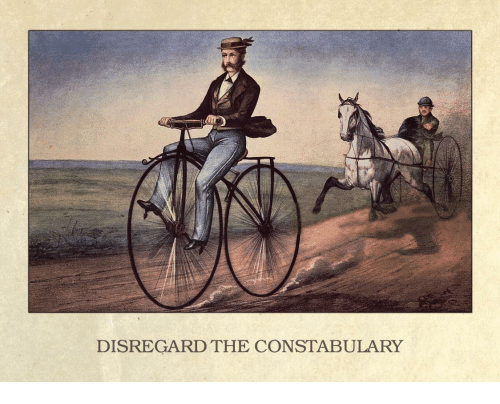 You can already view the playtest cards on Scryfall and other online databases, which makes it seem like they might be encouraging people to start planning their use outside of the Mystery Booster drafts. So I’m going to do so here, in public – I hope you’ll have fun exploring some of them with me over the next few articles. I don’t pretend to be a complete expert on Cube or on limited, but I have played with a lot of different types of cards and a lot of the existing designs, and I’m used to looking back and seeing how things interact.

I won’t be commenting on every single card, just the ones I find most interesting, but I’ll throw in a bonus outside of the normal color order: Ral’s Vanguard. 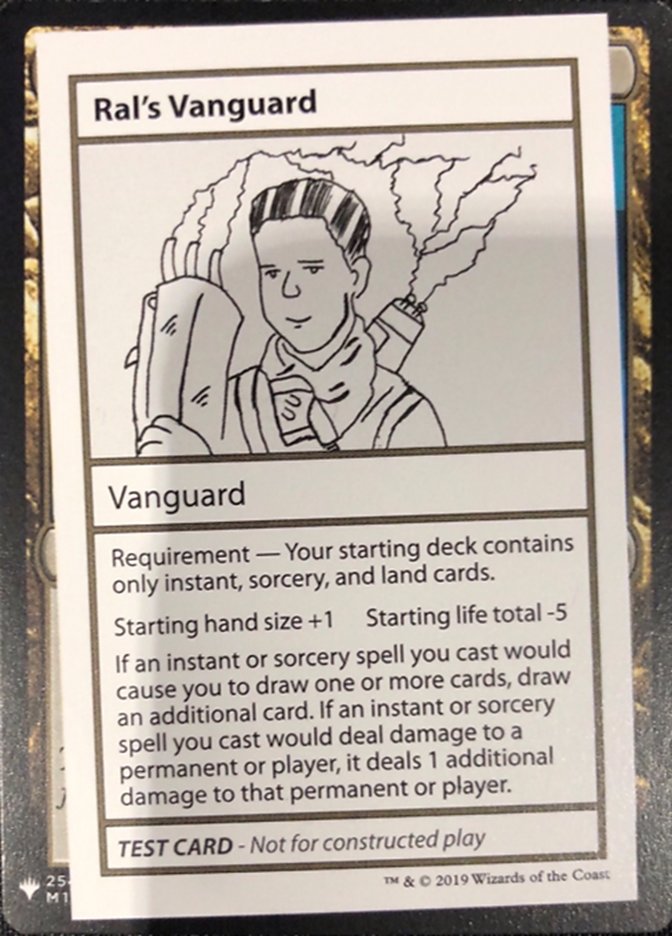 I really hope this is hinting at a return of the Vanguard concept. Vanguard is kind of a spiritual precursor to Commander, although your leader can’t be attacked. It can be combined with other formats, too, and has its own unique feel and style. While Commander’s success is a good thing, it does sometimes feel like there’s very little discussion of other casual formats and styles on the internet nowadays. Variety is the spice of life, and particularly of casual Magic.

As for the card’s game effect, it’s pretty much Ral Zarek doing Ral Zarek things; it’s the blue-red spellslinger deck taken to its logical extreme, and it pushes already good cards way, way over the top. Unfortunately, you can’t combine it with Ral’s planeswalker cards, but that’s probably not too much of a loss (and if you were to use the Storm Conduit to copy draw spells enhanced by the vanguard, you would probably end up decking yourself). 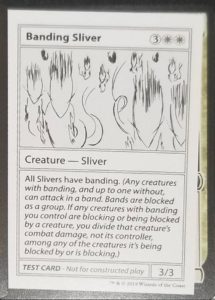 Here’s a scary thought: if Tempest had come out a year earlier, this probably would have been a black-bordered card. While Slivers are already like a super-banding tribe by their nature, there are things this lets them do which they couldn’t otherwise. For example, there are other cards that already give Slivers the ability to regenerate, but when your Slivers attack in a band, you can direct any combat damage from a blocker to one of them and regenerate just the one, saving you about a hundred mana each combat. This can also give you an edge if somebody is relying on a blocker with protection from a color: you can band a Sliver of the color he’s protected from with one of a different color, and if the creature blocks the band, he’ll take damage from the second one. 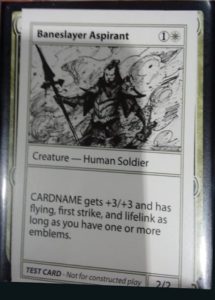 This card could literally exist in a current set, without any need for alternate timeline shenanigans like the Sliver. The easiest way to trigger him is undoubtedly Gideon’s Amonkhet or Battle for Zendikar incarnations, but I would like to see someone combine him with Serra the Benevolent. His enhanced stats would make it more likely for him to be the last creature standing to keep the emblem active, which makes for a pleasing symmetry. 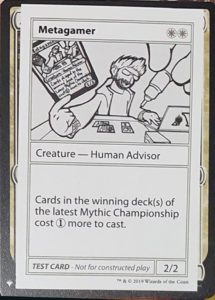 This, in turn, is the kind of card you could just about see in a current Un-set. This would be much easier to implement in something like Arena, which does disturb me a little – Team Tabletop for life, y’all. At the very least, it seems to be expecting that players or judges will be able to look it up at every opportunity. The most relevant card it hits right now is probably Oko, so you’ll have an extra turn or two before the Metagamer becomes a 3/3 Elk along with everything else. 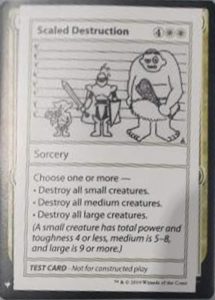 I am all in favor of anything that saves space on cards and makes room for more rules text and flavor text. The “small”, “medium”, and “large” categories are intuitive and easy to use, and even easier to build around. White has always had a conflict between its two greatest strengths – cheap creatures and mass creature destruction. The sooner we get a card like this in a black-bordered set, the better. 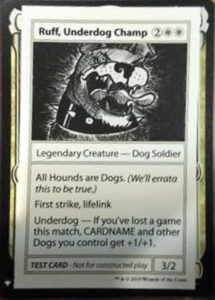 This guy exists in the same space as Gus from Unglued; if you like Gus, you’ll probably get good use out of Ruff, and there’s way, way more tribal support. He might actually be better in his way: Gus can potentially be bigger, but Ruff has combat abilities, and with Ruff you aren’t putting your eggs in one basket.

Did you know that the etymology of the word “dog” is still mysterious to linguists? English also has the word “hound”, which means much the same thing and is shared with other Germanic languages, and it’s not clear either why it also needs “dog” or where the word came from. 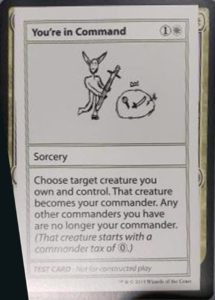 The Mystery Booster release notes state that this card gives your creature the benefits of being a commander, but doesn’t add the deckbuilding restrictions. You can make a mono-colored creature your commander and continue playing a three-color deck. I think this is one of the most low-key powerful cards in the entire playtest set. It can turn a normal card advantage generator like Azure Mage into one that literally can’t die. It can turn a creature with one-time resilience against removal, like Cloudgoat Ranger, into an engine. Heck, with the right kind of auras and other buffs, it can turn an evasive creature into a one hit kill – you usually can’t do that unless you’re playing Infect.dec. And friends don’t let friends play Infect.

Next time, do you wanna get nuts? Because the blue playtest cards are coming up.