You can read comments on some of the white cards and blue cards too, if you haven’t yet done so and would like to.

On the introduction of the planeswalker card type, many players immediately thought about how Magic players are traditionally concepted as planeswalkers themselves. There are various interpretations of the lore of casting a planeswalker spell, but the current official one is that it involves the character agreeing to come and help you by doing the specified things on the card for a period of time (hence the terminology of “loyalty counters”). They might be inclined to agree because we seem to be a powerful tier or subgroup within planeswalkers, since we can do things like combine spells from different time periods or summon the gods of Theros. This might suggest the reason why we can call on Nicol Bolas sometimes, because he probably thinks we’d be useful to his plans! Some of us would also rival him in age, if we were in-game characters; for example, I started around the time of the Ice Age expansion, and the Ice Age ended almost 2,000 years before the Dominaria expansion.

This does, however, raise an interesting question: is it significant that other planeswalkers’ abilities operate in such a different way than our use of lands and mana? It doesn’t take away from the game, as it’s necessary for things to work well, but apparently one designer took it on themselves to partially close the gap: 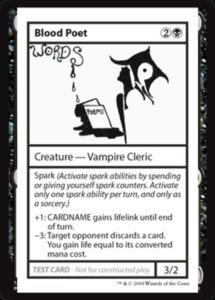 A set with numerous cards like this would be pretty crazy in casual and Commander, now that we have a whole bunch of proliferate cards from both Scars of Mirrodin and War of the Spark. I presume it would have the same sort of design concerns as Kaladesh‘s energy counters, and the difficulty of getting rid of them, although it’s kind of held in check by the fact that you can only use one spark ability per turn. 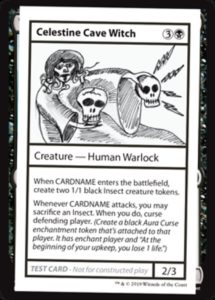 This card isn’t actually that much of a stretch from existing cards – compare Estrid, the Masked, for example. In a way, I like this better than some of the cards that make tokens that are shuffled into your library, because of the time issues and memory issues involved. When you’re in the mood for Magic, you want to get in as many games as you can, and/or as much fun as you can, and shuffling and manipulating decks sometimes gets in the way of that. On the subject of time, the curse she creates isn’t the fastest, but in a deck with aggressive creatures or burn spells, it can certainly add up. Even an opponent in green or white is going to feel bad about using a Disenchant effect on a token.

I’m also very happy that Warlock is a creature type as of Throne of Eldraine and apparently going forward, too. A warlock or witch is certainly not a wizard, and they’re not a shaman either – we have all these cool words in English, and we need to use them! 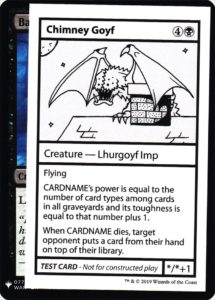 I like Lhurgoyfs, and was a little disappointed that there weren’t any Lhurgoyfs in Dominaria. I don’t find Tarmogoyf to be among my favorite Lhurgoyfs, because all he does is be efficient; I have some bad memories of a past Standard season where it was correct to play him in decks where it should have made little sense to play him ranging from burn to Makeshift Mannequin to control variants, and he overshadowed interesting cards like Quirion Dryad and Wren’s Run Vanquisher. But I do like Chimney Goyf, despite the fact that they probably thought he was an Un-style, un-serious meme card. That mana cost makes him a lot more fair, and the Chimney Imp death trigger feels more threatening when it’s attached to a creature that will actually hurt you if you don’t kill it. 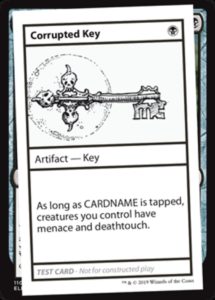 This style of card has definite combo potential if they revisit it, despite this example being restricted to combat abilities. It also reminds me of the skulk ability from Shadows Over Innistrad. I think that’s partly because of the flavor and partly because there was a skulk-related card named Skeleton Key.

Either way, I actually really liked the skulk ability, despite Mark Rosewater finding it problematic. If you did the recent survey about future planes and sets, you’ll have noticed it was mentioned as an element of Innistrad where they were interested in your level of interest in it. I put mine as high, but if you didn’t have a chance to do so, you should write in to Wizards. We need more things in Magic that are both flavorful and make you think differently about how you play (like Corrupted Key, for that matter!). 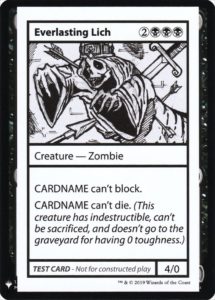 Here’s a fun thought in the vein of Banding Sliver: if they’d thought of the indestructible keyword in the 90s, they probably would have phrased it as “CARDNAME can’t die”. While he is still affected by variants on Oblivion Ring and Control Magic and Unsummon, there are other decks that can’t stop him at all, and he’s absolutely stellar to pair with equipment. 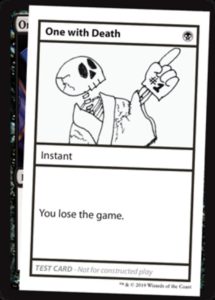 Despite being the first meme card of Magic’s modern internet boom, One With Nothing did see some tournament play. It basically reads “Counter target spell named Sudden Impact“, which is funny because Sudden Impact was also a card that people rarely looked at until Saviors of Kamigawa‘s release. One With Death would see some tournament play too. If you combine it with Lich’s Mirror, it is basically one mana to draw seven cards and gain up to 19 life. It actually has a friend in the same set, too (more on her in a couple of articles’ time!). 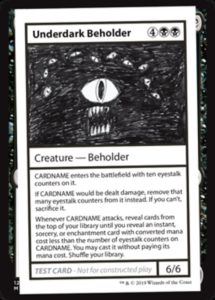 This card reminds me about wanting a set that crosses over with Dungeons and Dragons. I don’t know which setting they would use, though. Ravenloft is very much like Innistrad; Greyhawk is a setting designed to have space for everything, like Dominaria; Eberron’s city of Sharn is like both Ravnica and Kaladesh, and its wilder parts are much like Zendikar. (And they don’t seem to like Mystara or Krynn much at all any more, for reasons which elude me.) Maybe we’re already in the fantasy card game that crosses over with D&D, and never even realized it!

Even though this particular card started as a flavorful way to represent a beholder, it does open some interesting doors in design, and may be inspired by planeswalkers having more or fewer abilities available to them as they gain or lose loyalty counters. It also opens some gameplay doors, mainly things to do with proliferate and the like, even though this contradicts the lore of beholders almost always having exactly ten eyes.

If only they could have made a way to replicate each eye having a different spell-like ability . . . 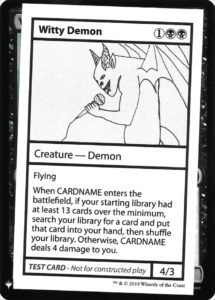 Witty Demon’s stats and the reference to the number 13 make me suspect this is less a Future Sight-style design and more something that almost made the cut for one of the Innistrad blocks. I am actually intrigued by this gameplay element, and not just because I once made a Battle of Wits deck. We usually feel there’s never any reason to go over the minimum deck size, and giving people one might make for some unique strategies.

I don’t know if you’re officially allowed to choose to go over the 99-card limit in Commander, but I would certainly let you do so. (Same for my 50-card singleton decks I post on Instagram sometimes!) 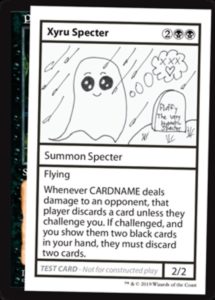 I remember when the clash mechanic from Lorwyn was in Standard, and sometimes made it to the late stages of tournaments. I didn’t think much about this, but I knew people who thought this was a bad thing. I couldn’t agree with them then, and I still can’t now. Why are you playing a game where you shuffle your deck, if you have such a problem with randomness?

The challenge mechanic here is superficially similar to clash, but you have a little more control over what’s in your hand. It leads to some interesting dynamics, particularly in situations like a control mirror where opponents have layers of answers and counter-answers. When faced with a Xyru Specter, an opponent might try to get rid of it to at least draw out cards from your hand, and thus increase the likelihood of a successful challenge if they’re not successful at killing it.

Challenge is another mechanic I’d love to see adapted for a regular set, although I wonder if it might favor slower decks. Most aggro decks like to just throw things onto the table as fast as they can, although there have been exceptions (Bant’s exalted decks come to mind).

In my next Mystery Booster article, I’ll look at some of the red cards. Looking back at Onslaught cards, it’s amazing how much deeper red’s set of effects have become, and that seems to be on track to continue. (Although it looks like there will still be plenty of Sligh cards.)