It’s remarkable how little tolerance some online commenters had for Oko and Veil of Summer. I have to mention it because it seems to have been some of the same people who were busy running to excuse cards like The Scarab God (or Caw-Blade, for those who were around further back). If cards shouldn’t be overpowered and matchups should be interactive, that goes for whatever colors of mana they use. The way to address the issue is to take away the ability to unfairly dominate matchups from all colors, not just some of them – and certainly not to give it to some colors and not others.

Fortunately, if you are reading this, you are a fair-minded and well-rounded Magic player, and as such you are probably excited to talk about insane green cards. Let’s do this. 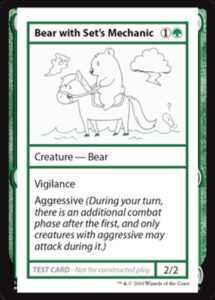 He delivers exactly what his name promises. He also has one of the less outlandish keywords of any playtest card, so much that I wonder whether this exact thing is in an upcoming set. Then again, there are rumors of things like flying counters in Ikoria, so it probably doesn’t go by that. It’s a little hard to use a keyword like aggressive when there’s only one creature that has it, but you could always use something like Clone or Followed Foosteps. 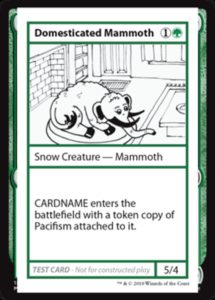 Although this is kind of another card that depends on you knowing what Pacifism is, I actually think this kind of design has potential. There’s probably space on Magic cards to spell out the token’s effect if it’s something simple like Pacifism or Weakness, and it would lead to different deckbuilding decisions than we’re used to seeing. I’d expect it in an enchantment-heavy world like Theros, where you would be looking to use more enchantment removal than usual anyway. It probably doesn’t feel good to use Revoke Existence here, but you could imagine metagames where maindecking something like Tranquility would be a good bet anyway, and it would gain an incidental use of turning on your beatdown creature.

I do want to experiment with Domesticated Mammoth in other settings, though, just because his art is so cute. 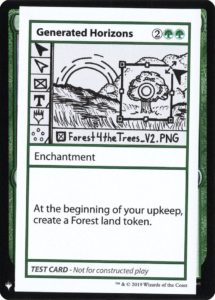 This is a reference to Endless Horizons from Eventide, though it’s more powerful, perhaps just because green is a little better at lands than white is. It gets out of hand very quickly in pretty much any deck, and while it’s perhaps craziest with things that make lands generate additional mana, I wonder if there’s a potential deck that exploits the fact that you technically don’t need to draw Forests from your library any more (something like Mana Severance – seems risky!). 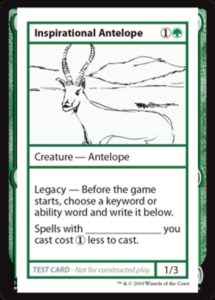 The first thing that occurs to me when I see this guy is the storm keyword; I’m not sure he’s fast enough for Legacy, though, which tells you something scary about Legacy. The second thing that occurs to me is that the set’s notes say you’re not supposed to erase the word you chose between matches, which means technically you’ll have to buy a whole new set when you want to make a new deck. I’d certainly let you erase if you were playing at my house.

This guy is actually more powerful than he looks. There are a lot of creatures with flying, haste, or trample who are already efficient anyway, and he pushes them up even further, particularly in combination with mana ramp cards. 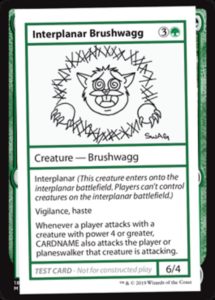 The idea of a creature you can’t actually control is kind of interesting, though I don’t know if competitive decks would really like it. In this guy’s case, you can actually exert a degree of control over him with anything that decreases your opponents’ creatures’ power. It also encourages you to reach for cards you wouldn’t always think about (Pin to the Earth?). This is always cool, though I wonder if doing that too much would take away from your general midrange/ramp gameplan. 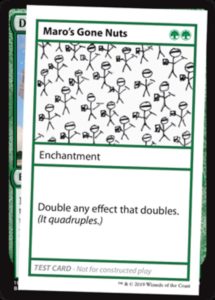 I’ve been expressing the sentiment in this card’s title for years; this might just be confirmation. I know that there haven’t been new Doubling Season analogues very frequently in recent years, but I put Ronom Unicorn in every deck I made for a while after the original came out. There are enough variants out there that I might just have to make a Tranquility Tribal deck. This is your only warning. 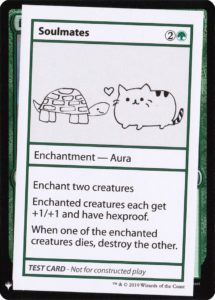 This reminds me a lot of the soulbond keyword from Avacyn Restored, and how I’m a little surprised we haven’t seen it since then. It’s flavorful and it can be effective in the right circumstances, which is largely because each of the soulbonded creatures is still a creature on its own. Soulmates does not have that advantage, of course, and it even has more of a disadvantage than a conventional aura because of the need for two targets and for them both to stay in play. Having said that, soulbond plays better than it looks, and so would a card like this if it had the right stats. Even just a version that gave them both a power boost and trample would devastate some opponents. 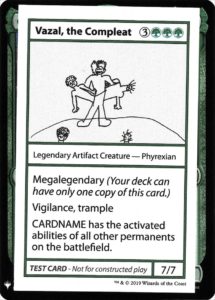 I don’t really see the point of megalegendary, but then I mostly play singleton formats. Jokes aside, it’s worth going to the Mystery Booster release notes on this guy: planeswalker loyalty abilities are not mentioned and presumably do in fact work with him. (I’m not sure why crew abilities don’t, but I guess we have to accept it – or house rule it, as I sometimes like to.)

I’m not really sure how I feel about “Phyrexian” as a creature type. Phyrexians have always been very diverse in their shape, size, function, and ecological niche – Dragon Engines were originally from Phyrexia, but there were also things like Battleflies, and all of them served (or still serve) the will of Yawgmoth and/or the Praetors. That’s before you even get into things like Mirrans who were assimilated.

Next time, we’ll go through multicolored cards, which they’ve put an awful lot of effort into. Though I suppose there’s inevitably going to be a Son of Daughter of Son of Ravnica (with at least one sibling because every guild needs the same number of cards), so it’s probably a good idea to start thinking about it now.