If you haven’t heard of the Hawk-Dove principle, strap in. Your head will hurt.

I wasn’t around to watch Bushiroad’s stream when Gyze was announced. I only came home to watch the community collectively shit bricks about this thing. Or maybe complain about the RNG factor regarding this, one or the other. Regardless, I imagine my reaction was pretty much the same on the side of both camps. I too was awed by this nightmarishly hard-to-sleeve monster, but then I calmed down and looked at it in a vacuum so that I wouldn’t lose my mind. I mean, it’s one of the only things I got going for me as a Vanguard player. Not enough critical thinkers around.

Now, if I wanted to talk about a card specifically, I would just let the COTD pages do it all for me, but honestly, Gyze completely craps on conventional logic, as was advertised. This card (or cards as it were, it’s double-sided to be two different units) could easily take up an entire article on its own. So at least it saves me having to type out a long review when the time comes. Hooray efficiency.

I want to start, first of all, by saying that I’m not a fan of the conditions needed to play Gyze at all. For the reward of a permanent 30k Vanguard with your rear-guards being 25k all the time with no way other than something like Chaos Breaker Deluge to ruin this field, you need to have scored 5 triggers throughout the entire fight. That’s chance reliant, and as a…semi-competitive player, I can’t say I approve. Any sort of effect that needs chance to work is going to rob a better player of a win the event of success, or just die on its ass if not. With that said, I don’t want to give the impression that this is not worth going into. 30K is defensibly meaty and 25k is not a bad way to attack. And should you live long enough, your full field can just eat the opponent’s health by dealing 1 damage for each Zeroth Dragon you possess on the board. As long as the deck was playing reasonably normally until Gyze was dropped, you won’t even need a full field of Zeroth Dragons to seal the win, although you almost certainly will. This can be aided with decks that manipulate the deck for more triggers, like Battle Sisters with Stollen.

I should emphasise however that this deck is not without flaws. This thing can be rushed down to hell because as long as Neon Gyze is active, you cannot power yourself up with triggers. You just get the extra Critical, Stand, etc, so the opponent can pretty much attack you with impunity as long as they are confident they can win before you ever go into this. That can work against them of course by attacking straight into many damage triggers. But really, that just ties into the first problem I mentioned earlier, in that you’re getting lucky, and in that case, the opponent cannot compensate with skill to get around it. They just have to live with the fact that this death countdown has just gotten faster, and it’s all their fault.

It is precisely for this reason that I cannot accept Gyze. The entire thing is just broken. I don’t mean broken as in it’s unbalanced, because it is flawed. I mean that it completely shits on the norm, and when that happens, it invites future cards to incorporate sacky crap in its effect, regardless of its implications. That’s why I hate it when people try to argue dishonestly. No court would let shit like “I can’t prove it, but I think I was told by a magical octopus living in my head to kill that family with my pickup truck” fly. All this, combined with the fact that the entire skill, along with the conditions needed to use it, means the entire game is pretty much decided on a roll of the dice. In a best of 1 format that already struggles to control for skill, this thing is a logistical nightmare, for players who want to win because of their own efforts, and for the unlucky who just wanted their shit to NOT blow up in their face. 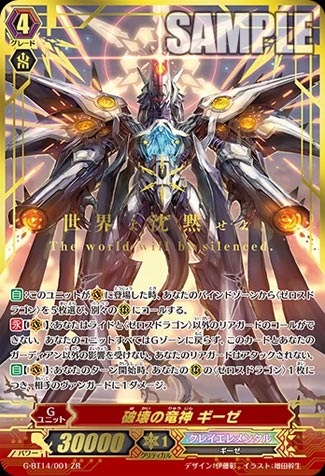 But supposing you decided that you still wanted to play Gyze anyway, because you have way too much money and not enough sense, how does it hold up? Well, the deck works, to a point. So far nothing too different from normal decks, other than you have to run at least 5 Zeroth Dragons and every ride is a -1 since your starter won’t have Forerunner. It’s your playstyle that will have to change, favouring a fast damage output just to get the opponent to not Gradestall you, and that might be tough when no trigger you score will power any of your units up, offensively or defensively.

But here is what is the strangest part about Gyze, and one that I suspect might turn players away from using it other than on a local level: the entire deck works better if hardly anyone else is using Gyze.

Have you ever heard of the Hawk Dove principle? It’s best known as a game of chicken. Applied to this case, the opponent’s best interest is for them NOT to run Gyze if you are, but what if they don’t know what you run? Should they then run Gyze themselves and risk being screwed, because neither player can actually DAMAGE the other as long as both Gyze’s protect themselves? (That’s a ruling: you cannot artifically damage Gyze with something like the Purge). This should be avoided because then the match would just go into time, and the loser is the player to deck out first. The defender only needs to drop 20k shield to no-pass Gyze every turn, and the attacker cannot get over Gyze with any of the Zeroth Dragon rear-guards without at least one trigger, which they cannot receive because they cannot be chosen for effects, and even if it were untrue, it’s a piss-easy 5k block. So the Gyze player only benefits if the other guy ISN’T using it.

Fortunately, or not as the case may be, we can just throw a Hawk into the equation and render this moot. G1 Rush.

Yes, that Grade stalling bastard deck I toted last year. I’m actually thinking of picking this up again. I said before that trying to win on a mechanic that can be so easily shut down was dumb, and it was only because they players themselves were dumb, or wanted to prioritise fun that it managed to not die on its ass. And yes, I am aware it’s Stride requirements don’t rely on the opponent also being on Grade 3, but you’ll hardly care as long as it seals all other Generation Break and you win so fast they don’t ever get the chance. Really, if we’re going to go this route, we might as well go for the most optimal deck and that’s this. If you want to read more on the Prisoner’s Dilemma, be my guest. But then what if they start to run more counters if this becomes meta GAAAAH

(The boss didn’t even think about it, but it’s a great idea! – The Boss)