Another G Booster hacked up from Bushiroad’s phlemy lungs and that means it’s once again time to evaluate what’s worth destroying all the cash you need to pay back to all those very bad people, and what can be safely ignored in the quest for petty victories. As for me, I basically pre-ordered the bare minimum required to keep my Gear Chronicle deck REASONABLY up to date and told the rest of the set to go fuck itself. Come on, over the horizon is more Kagero, I ain’t got time for your shit.

This set, you can look forward to bolstering Gear Chronicle, Shadow Paladin, Nubatama, Neo Nectar, Oracle Think Tank and Narukami. Keep in mind this is the last G Booster before we get another new bloody mechanic introduced and we wrap up this current story arc, so if nothing else, the news that the new season’s first set WON’T support Gears should open up a lot of clues as to the story flow. Unless of course the fuckers cheat and make Chrono actually stop being bad at ZTB by using ZTBs from 2 BLOODY SETS AGO. But I digress. It’s on!!

Gear Chronicle: So since the only Gear Chronicle decks taking centre stage is Fang, Jet and Demiurge, the set is as always more or less dedicated to supporting all three. For Fang and Demiurge there isn’t a whole lot save for tech cards, with the non-techs being stuff like Chronotiger Gear Glare, but really, it’s all standard fare, being cards that bind themselves and other cards. So what you’re really here for is the ZTBs designed for Chronojet. We have a new G-Unit that’s Nextage but cheaper and a bit less combo-friendly, Spearhead Unicorn, and a Critical Trigger that can move to soul. Out of the three, only Gearnext is absolutely vital, nothing this set changes the standard current build. So if nothing else, this should be cheap.

Get it for: Chronodragon Gearnext, Pulsar Spearhead Unicorn, Pulsar Thruster Bison, Chronofamg support for the hipsters.

Shadow Paladin: Similarly, only a few cards are actually going to change Luard builds in any significant way, and even then they are tech cards. Enid’s pretty funny but apart from that there isn’t a whole lot aside from the obvious new GR rarity Dragstrider Luard. The main draw is that Claret Sword Dragon decks are getting support again, with a new G3 Claret, a new G-Unit for Claret (but could still be chucked into Luard if that’s how you roll, it’s generic technically), Morion Spear Dragon, Blue Espada Dragon, and more besides. A new G Guardian also appears but he’s haxxy. Helps with Ritual and is better than Ludvik but if you’re happy with Plotmaker he can be ignored.

Get it for: all the new Claret support, Dragstrider Luard.

Nubatama: Well, I’m not really sure how to further Domination in terms of the main deck either, so here’s Shiranui Mukuro (the second GR), and Tamahagane 2.0, because the others are wank. The rest of it is pretty much Afterimage cards, but I didn’t spot a single one that would be worth running over old Tamahagane, whatever the old crowd was when it was first a thing, and Grade 1s? Between Perfect Guards, Stride fodder…there’s nothing here worth ditching for Dreadmaster’s early-game (who incidentally gets a reprint this set, lucky you). All in all, that leaves only two cards worth picking up, so at least that narrows it down. 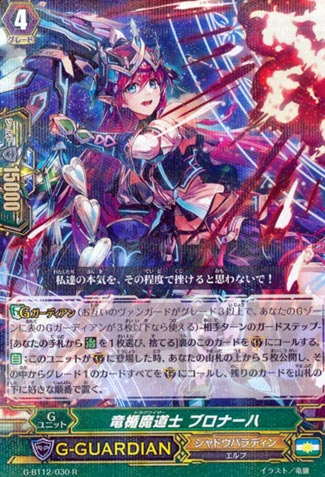 Neo Nectar: Almost everything in here is dedicated to Maiden Of cards this set, with a select good things for Bloom decks. As far as they go, the Maiden Ofs do get a new G Unit, a reprinting of an old one, and several other new units to ensure a reasonably pure deck. The big seller is their new Grade 3 Stride bearer, so you don’t need to sit on the Legion pair shit anymore. You can pick them up if somehow you hate Generation Break but they still lack Bloom’s Late Game. Sharl, new Diane and Lieta are your new Bloom cards to replace some old toys. I should point out that none of the Bloom cards worth picking up are below RR in rarity, so set aside a decent budget for playsets of them.

Get it for: Sharl, Lieta, Diane, Maiden Ofs if you really must.

Oracle Think Tank: AKA The Set that made Battle Sisters. In all honesty they take centre stage, the Oracle cards are almost an afterthought. I say ALMOST, because a new Oracle G-unit appears that functions as OTT’s best finisher, turning EVERYTHING in the front row into Silent Tom that can also block G-Guardians. That is pretty much a staple 4-of right there regardless of deck. But back on topic, the Battle Sister support includes more triggers, a Stride bearer, a starter and 2 G-Units (a G-Guardian and a G-Unit that’s Kamususanoo except better), and a searcher and Stride fodder Grade 1. Combine this with slightly older non-G3 Battle Sisters from years ago and what the Stride bearer actually does, and I wouldn’t be too upset if I saw it around. I’d call them the big winners this set, so pick them up, because odds are you’ll use most of them. Akizuki for Tsukuyomi deck shout out too before I forget.

Get it for: Ichikishima, all Battle Sisters, Akizuki.

Narukami: Anything that provides an alternate Grade 3 to ride is already winning in terms of quality in my mind. That goes for our new Vanquisher Grade 3 and all his support, and a new Dragonic Descendant, and some new Eradicators. Examining Eradicators first, it’s actually not bad. We get Sigma, who gives Descendant decks a new trick, a new Stride supporting Grade 1 in the form of Castor, and one or two new toys that you can pick and choose. For Thunderstrike, OH BOY. Where to start? We have a new starter who can recharge resources before Generation Break, new support to drop-zone bind to counter mirage play (including the new Vanquisher Grade 3), a Perfect Guard that lets you draw a card, and more besides. This is the second big winner of the set and I absolutely recommend you pick them up. Nothing here works to hard counter Denial Griffin, their main weakness, this set but that can be saved for next time.

So you can basically call this set the one where OTT actually got somewhere resembling good, with their good friend Narukami. Everything else got some pretty token toys. If you’re still salty about some of the cards, cheer up. We get power-creep up the fucking ass next set. Generic G-Units for multiple clans! What fun, I don’t fucking think.