Let me give you an analogy.  Mario and Luigi are brothers that display unique traits, such as Mario wielding fire power and Luigi wielding lightning elements in Mario & Luigi Superstar Saga.  Yet, despite their different talents, they share a goal and have everything in common.  The same can be said for Unova Dragons, Reshiram and Zekrom!

On the Shining Legends expansion, there are 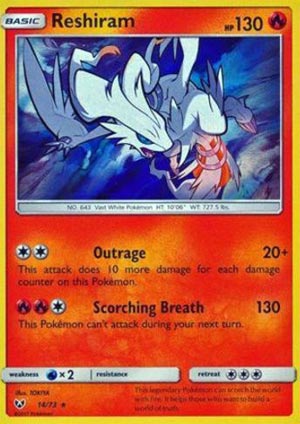 two Pokémon which brings back memories.  These Pokémon are Reshiram and Zekrom!  Those cards strike a resemblance to the older Reshiram and Zekrom from the Black & White set.  This is me reviewing a twofer alone; I am uncertain if these cards are going to be reviewed by the crew, so I am taking matters on my own hands.  Also, since those new cards are similar to older cards, I may make step-by-step comparisons, as well as pointing out the similarities and difference between the old and the new.  So let’s get right on to it!

Both Reshiram and Zekrom has 130 HP, with the same Outrage attack that costs a Double Colorless Energy and did 20 damage plus 10 more for each damage counter on that Pokémon, as well as an retreat cost of three (searchable with Heavy Ball).  They also maintained their respective weaknesses: Reshiram is weak to Water types while Zekrom is weak to Fighting.  Both of the Unova Dragons’ second attack does 130 damage for three energy (two of their respective type and one colorless energy) with some sort of drawback.

Now we’re about to mention the differences.  The old Reshiram’s Blue Flare does 120 damage with the two fire energy discard while the new Reshiram has Scorching Breath that does 130 damage with the clause that this Pokémon can’t attack next turn.  This detrimental effect can be removed by getting it out from the active spot and have another way of promoting that Pokémon back to the Active.  Zoroark’s Stand In, Keldeo’s Rush In, or Solgaleo-GX’s Ultra Road might do the trick!  The old Zekrom, on the other hand, has Bolt Strike that does 120 with the clause of doing 40 damage to itself.  The new Zekrom has a Metal resistance and an attack called Storm Blade which does 130 damage, but with the clause of discarding two energy from that Pokémon.  Hmm, seems like their roles have changed for their second attacks!

In terms of playability on both Pokémon, they are 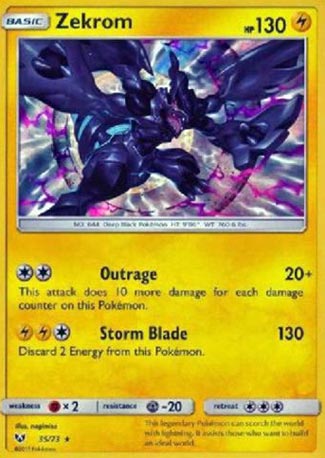 very good non EX/GX that can dish a lot of damage.  Their second attack is just enough to OHKO any Pokémon weak to fire or lightning, even at some 250 HP GX Pokémon!  Equipping a Fighting Fury Belt adds 40 more HP and 10 more damage, bringing their HP to 170 while Outrage does 30 plus 10 more for every damage counter on it.  Assuming they are at 10 HP left, their Outrage will do 190 damage, enough to KO most Basic EX/GX Pokémon and advance the prize trade.

It’s hard for me to say what the future holds for these cards.  Those two are clearly superior than their debut counterparts, and yet, they are not dominant than their debut counterparts at its time.  The BW Unova Dragons may have enjoyed their success for 8-9 months before EX Pokémon arrived.  This SM Unova Dragons arrived when EX and GX Pokémon are already on the scene.  That doesn’t mean you shouldn’t use them, you’ll just have to adjust how these Pokémon are being used.

So go ahead and enjoy using these Pokémon!  They may not be what it used to be, but they still pack a serious punch to those who underestimate it.  In limited, you could run one of those Pokémon with 39 energy.  Reshiram may only attack once every two turns if it decides to use Scorching Breath, which may be bad.  Zekrom may have to alternate between Outrage and Storm Blade due to the two energy discard.  130 HP is enough to survive some hits, and should you be critically injured, Outrage will take care of most Pokémon sans GX.

Ratings (for both dragons)

Sylveon’s Notes: Wow, the Sun & Moon Unova Dragons made the Black & White Unova Dragons obsolete!  Now what are we going to do with your old copies, Vince?!

Vince: I would still keep them in case I want to switch things around.  In Expanded, I may still need Bolt Strike or Blue Flare depending on my style.  I treat old and new cards as an option and not something inferior in most cases.