The one where it’s explained that Drachma isn’t entirely shit.

Now that March has managed to fully creep its way into acceptance, all six of the Zeroth Dragons are now available for English format, and several comparisons, some unfavourable, have been made comparing them. People have been ranking each Zeroth Dragon in terms of usefulness, and since I am nothing if not sceptical I decided to bow to peer pressure and start my own rankings.

I would first like to say that I don’t consider Zeroth Dragons to be particularly good design. Having a card work as a generic option in several clans in a nation would only give license for similar cards to take the stage. I’m not above introducing some variety, but I feel Vanguard’s main attraction was that the game was simple. Things that counter RNG like G Guardians to counter trigger sack to some degree were introduced slowly. Adding further complications to that is only going to streamline each deck into using the most optimal strategy coming from combining the best of several worlds together. Last thing we need is bizzare but bullshit hybrids you see in Yu-Gi-Oh and the like.

Like it or not though, we have the Zeroth Dragons anyway, eating into our budget as Sebreeze mentality dictates we find room for them somewhere, for the cheese wins. But which is the best? Well, I’m going to start with the worst and build up to what I think is the best Zeroth Dragon. So let’s cast our minds back to kindergarten and learn to count backwards from six!

Sixth Place: Zeroth Dragon of Death Garden, Zoa. When I reviewed Zoa, I addressed the problem of redundancy: if you were going to win on Zoa, you were probably going to win on just about anything else. The only time the opponent won’t throw a Perfect Guard in the face of the Quintet 9 column is if you spent all the turns building up to it forcing them out with other big columns. By that point you’d probably have won before then. Yes, Quintet 9 cannot be checked by Denial Griffin or Hetroround Dragon and yes, it stops miracle Heal Triggers, but with large enough columns and enough Critical Triggers 2 damage from one attack would do largely the same job. For that reason, because it only takes a game you were going to win anyway and then wins it then and there when the decks it could go in do a fine enough job of it as it is, I rate this as the worst Zeroth Dragon. I don’t imagine it’ll be too controversial, there was not much love for it from the start.

Fifth Place: Zeroth Dragon of Distant Sea, Meggido. Meggido isn’t Zoa levels of redundant but he still suffers from only having a niche use. In something like Thavas where almost nothing will easily die, better finishers like Alexandros exist. This card only exists to answer to retire-decks because Chaos (or at least the variant that will exist once the Star Gate Nation Booster’s out) will still crap on it, or when other comparable finishers aren’t live for whatever other reason. As far as Granblue, Nightrose particularly is concerned, it works to a point as Granblue can search its pieces with Obadaiah and Hollow will empty your field for this to be optimal somewhat but again, better finishers. Which sucks because Nightrose and Thavas, possibly Blue Wave, are the only decks in which this would be good. Bermudas only want this because they have absolutely fuck all else as far as decisive finishers are concerned. With that said, in a vacuum it is 5k in multiples of 5 assured assuming no Defeat Flare shenanigans or similar so it can shave 5 cards before Meggido himself enters the equation, so if nothing else it can destroy a lot of hand if played correctly, but intercept is still a thing. But anything with a large hand will tend not to care, and I see the meta is going to be all about big hands and turning the board into The Killing Fields. 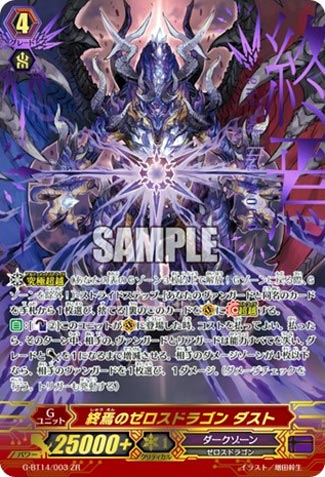 Fourth Place: Zeroth Dragon of Inferno, Drachma. I know several people have rated Drachma as fifth best, but I still don’t think that’s entirely fair, and it’s not because I main a Dragon Empire clan. Not entirely anyway. As before, this falls under the redundancy camp that the other Zeroth Dragons after this don’t seem to share, requiring low hand before this becomes good, but the whelms that people are finding to be decidedly under, I suspect, are due to the fact this card is being compared in relation to Kagero, THE Dragon Empire clan. And it’s true that Kagero has little to follow it up with should you fail, but he combines well with enough things to make him suck slightly less. Dominate Nubatama springs to mind, being cheap soft advantage and should you need field wiping Shiranui Mukuro exists, failing that, Shadowstitch Murakumo. I suppose like Zoa Drachma works, but only because it exists for a clan in which it can offer some degree of usefulness, which I suppose was the point. But the reason I rank him above Meggido is that Meggido only has one real use, while this has two: he can fuck up the opponent’s Vanguard, which means even if you should fail for whatever reason, the opponent is hard pressed to recover unless they topdeck Stride fodder should they manage to stay on Grade 3, or just be left with a shit Vanguard until they die. He’s also the only Zeroth Dragon to minus from the hand unconditionally without attacking, so that’s something to point out.

Third Place: Zeroth Dragon of Zenith Peak, Ultima. Now we’re getting somewhere. No matter which one of the six decks you’re going to spring him with, his use is generally going to be the same: call two things you need to combo and then stack a Stand and a Critical Trigger so that you get everything swinging with Critical to force out hand – a universally useful strategy. I guess it helps that most United Sanctuary Decks can run Stand Triggers somewhere, but those that generally don’t could find room: Blasters, which is all about 12 Crit (or 8 Crit 4 Draw for those who are extremely poor at soul management) could run 4 without losing too much steam. Rescue Gavrail obviously loves this, as then you could have every last attack swinging with an extra Critical attached. Only takes third place however as this can get checked by some common reactive G Guardians before you get to the good part, or hell, DURING the good part, and only Blasters with Gancelot Peace Saver and Gavrail with Antibody Pegasus can get around it really. What’s more, discounting G Guardians, only Gavrail and Fenrir decks with Wiseman would have any reason or room to abuse Stand Triggers: the rest of the decks are swinging with two rear-guards forcing 10k each, average scenario, before Ultima can shave hand with columns and Stand Triggers. But he’s easy enough to build up to, so he rates high regardless.

Second Place: Zeroth Dragon of End of the World, Dust. Oh how I um’d. Oh how I ah’d. Ah how I oh’d, between this and Stark, but in the end I decided Dust would be taking home the runner-up prize. One thing he’s got going for him is that he can be dropped on 4 damage, because he’ll force the opponent to 5 damage with no strings attached. Reducing the opponent’s Vanguard to only 1 power and sealing Grade 2 guard, intercepts, and Generation Guard for the turn is also useful, especially when Dark Zone is generally all about soft advantage, at least where the current decks are concerned anyway. It also helps that they’re cheap when it comes to the multi-attack department, and those that aren’t like Scharhot have several Grade 0 Guard sealing options. With that said, the reason I’m putting Dust second is because he’s still reliant on external setup in the form of rear-guards and subject to Perfect Guards, and should the opponent have locked you out of the optimal number of attacks somehow, via something like Gredora or Chaos, he may fail. Those sound like specific matchups but we know Chaos is going to be meta, and decks generally need to be compared to the current meta to be classed as viable.

First Place: Zeroth Dragon of Destroy Star, Stark. Well, by process of elimination, that just leaves this to take the trophy. As far as powerful finishers, desperate final gambits, and just flashy cheese plays are concerned, Stark is the most universally useful. There’s three attacks from the Vanguard even when your field is a load of shit, and it still gets one Drive Check per attack, so each one carries the threat of a Critical trigger. Unboosted, it’s still 35k guard to no pass it or a Perfect Guard, and the opponent doing it thrice isn’t generally realistic unless they were on 4 and managed to get away with letting one through. It also helps that the Star Gate decks from the Extra Booster that aren’t Messiahs are pretty good at pushing the opponent to 5, be it Viktor’s multi-attacks or Chaos Breaker Deluge. You do of course still need to be careful with Stark by virtue of it being a Zeroth Dragon and thus leaving you optionless should you fail, but this is probably the most assured finisher of the lot, given it can get around opposing plays by sqeaking in 3 powerful attacks and should the opponent lack that option he stacks brilliantly with the rear-guards. Also, all people can talk about is Grandscout doubling Stark’s power to 100k. Come on, that’s not ALL there is to Stark is there?