Before I tear off the wrapper, I want everyone to know that all Wizards of the Coast TCG Booster Boxes (Magic: the Gathering & Transformers) are packed in a tight, plastic overwrap that displays Wizards of Coast logos printed on the plastic.  This helps ward off counterfeiters.  If you are going to buy any boxes of cards, make sure they have this feature on the wrapper.

What is War for Cybertron Siege I?

This set has 48 Character Cards, and introduces Battle Masters and Micro Masters in the form of smaller Transformer Character Cards.  These smaller cards are 2.4″ x 3.5″.  The same size as a typical Pokemon/MTG card.

The larger Transformer Character Cards are also included in each pack.  These are still the larger 3.5″ x 5″ character cards

The Facts and the Odds:

There are 48 Wave 3 Transformer Character Cards and 64 Wave 3 Battle Cards in War for Cybertron Siege I.

The side of the Booster Box gives you approximate odds on getting certain cards:

The Booster Box contains 30 Booster Packs.  There are a total of 8 cards in each pack.  Booster Packs are huge.  The packs are 7.5″ tall and 3.5″ wide.  That is considerably larger than a typical pack of MTG / Pokemon / Yu-Gi-Oh! Booster packs. When you open the Booster packs, you notice that all the cards inside are nicely sandwiched between two solid pieces of white cardboard – similar to comic book backer boards.

The backer cards this time around also serve as advertising for toys in the Transformers War For Cybertron Trilogy.  These backer boards do a nice job of protecting the cards inside from getting dinged up.  Wizards of the Coast packages Transformers cards very nicely.

What Character Cards did we get in our box?  All images were previously released to the public, and you can see them all on our War For Cybertron Siege Transformers TCG Card List – Wave 3 Characters page

Here are the 30 Large Character Cards we received in our Booster Box:

Here are the 30 Small Character Cards we received in our Booster Box:

That is 24 Commons, and 6 Uncommons.  We received 6 Battle Masters and 24 Micro Masters.

Our overall Breakdown of Character Cards were:

35 Commons, 16 Uncommons, 4 Rares (All Large Character Cards) and 0 Super Rares.  Our Rares were:

It seems the odds of pulling a Large Rare Character card are around 13% based on our results (4 in 30 packs).

We love the way that Wizards of the Coast packages the Battle cards in each booster pack.  Inside each Battle Card sealed pack you get: 3 Commons, 2 Uncommons and 1 Rare. You can only see 1 common card through the clear packaging.  The rare is always the 6th card down.  And the 4th and 5th cards are the uncommons.  If you are new to the game, you might need more Battle cards for your deck.  And, if you run across someone selling sealed Battle card packs, you know there will always be a rare in there, and the seller has no idea which rare it is.

We’re not going to list the 180 cards we pulled from the Battle packs.  You can see all the Battle Cards on our “War For Cybertron Siege Transformers TCG Card List – Wave 3 Battle Cards“

Our overall impression of Wave 3 / War for Cybertron Siege I is excellent!  You now get two foil Character Cards in every Booster Pack!  And those cards are beautiful and are on high quality cardstock.  For collectors, grabbing 2 foils per pack is an amazing upgrade!  The packaging is fantastic, just like with Waves 1 & 2. 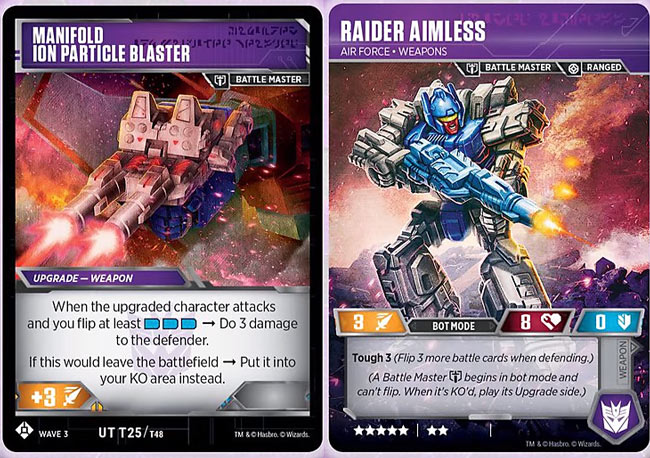 The Battle Masters are new and I don’t know how they’re going to change the Meta game, but I guarantee they will change it. Some cards like Private Lionizer and Raider Aimless look very promising, and I’m glad I pulled one of each! 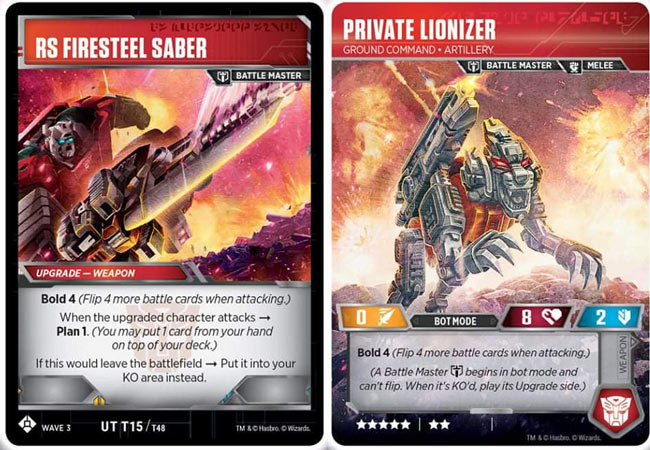 I just love that Wizards of the Coast keeps taking chances with this game by adding interesting twists and features to Transformers with each expansion.