All Wizards of the Coast TCG Booster Boxes are packed in a tight, plastic overwrap that displays Wizards of Coast logos. This helps ward off counterfeiters.  If you are going to buy a Booster box, make sure it has this feature.

What are Titan Masters?

From the Transformers Wiki: “Titan Masters are a diminutive breed of Transformer. Long ago, this ancient and mysterious group of Transformers worked within the gigantic bodies of the Titans, maintaining their complicated systems as the Titans journeyed across the galaxy. The Titan Masters were created as gifts, intended to be shared with other civilizations that the Titans might meet in their journeys. Each Titan Master possesses a unique Spark that allows them to transfer their innate powers into the bodies of other Cybertronians by forming their head, not unlike the Headmasters.”

“Collect heads and bodies of TRANSFORMERS characters and customize them to fit your play style.

Titan Master Characters: Mix and match heads and bodies to customize Titan Masters to fit your playstyle. Head characters give bonuses to the body, and when the body is KOed, the head deploys as a separate bot mode character.

The Wreckers: The fan-favorite Autobot special-forces team make their debut in Titan Masters Attack. Led by Sergeant Kup, the Wreckers get the toughest jobs done, no matter what the cost. 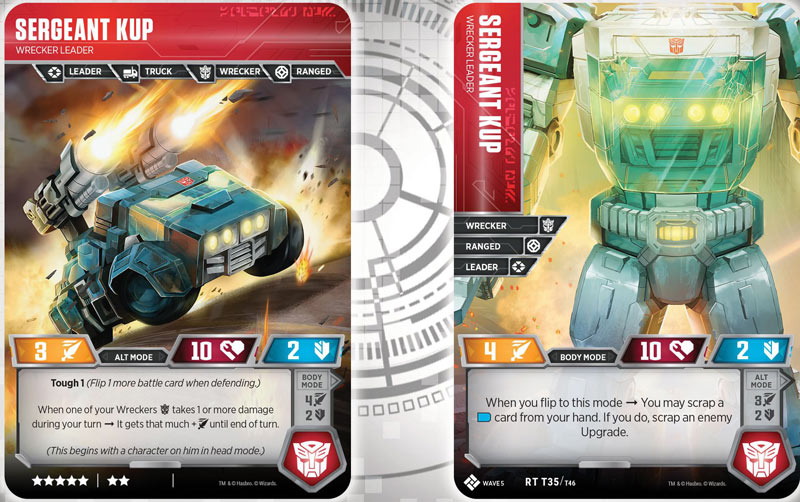 Stratagem cards: This completely new card type lets players customize characters on their team. Stratagems in Titan Masters Attack can modify characters from this booster release or from previous releases. 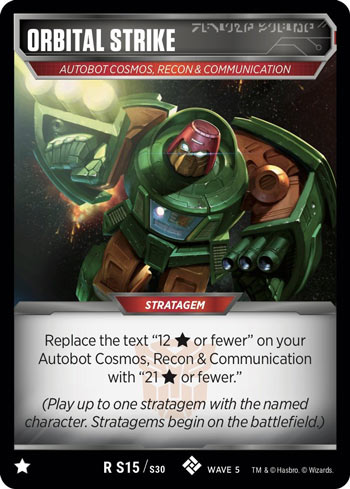 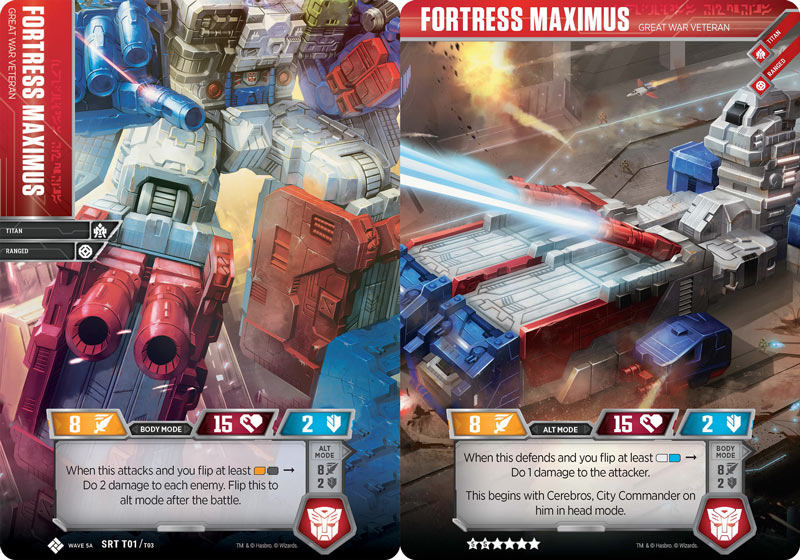 The side of the Booster Box details the approximate odds on getting certain card rarities: 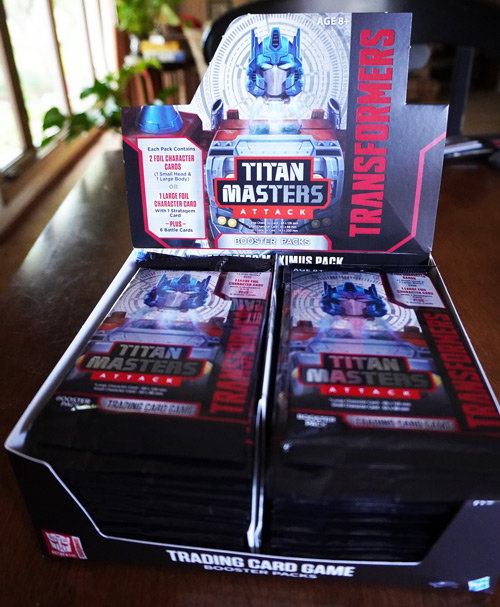 The Titan Masters Attack Booster Box contains 30 Booster Packs, plus the Fortress Maximus Titan pack (at the bottom of the box).  There are a total of 8 cards in each standard pack.  Booster Packs are huge.  The packs are 7.5″ tall and 3.5″ wide.  That is considerably larger than a typical pack of MTG / Pokemon / Yu-Gi-Oh!   When you open the Booster packs, you notice that all the cards inside are nicely sandwiched between two solid pieces of white cardboard – similar to comic book backer boards.

The white backer cards also serve as advertising on one side (this time around it’s for Magic: the Gathering).  Gotta get everyone hooked on Magic!  The backer boards do a good job of protecting the cards inside from getting dinged up.  Wizards of the Coast packages Transformers cards very nicely!

What Character Cards did we get in our box?  All images were previously released to the public, and you can see them all on our Titan Masters Attack – Wave 5 Characters page.

Here are the 30 Large Character Cards we pulled in our Booster Box:

Of the smaller (non-battle cards), we received 15 Small Character cards and 15 Stratagem cards.

That is 9 Common, and 3 Uncommon and 3 Rare Stratagem Cards.

We love the way that Wizards of the Coast packages the Battle cards in each booster pack.  Inside each Battle Card sealed pack you get: 3 Commons, 2 Uncommons and 1 Rare. You can only see 1 common card through the clear packaging.  The rare is always the 6th card down.  And the 4th and 5th cards down are the uncommons.  If you are new to the game, you might need more Battle cards for your deck.  And, if you run across someone selling sealed Battle card packs, you know there will always be a rare in there, and the seller has no idea which rare it is.

We’re not going to list the 180 cards we pulled from the Battle packs.  You can see all the Battle Cards on our “Titan Masters Attacks – Wave 5 Battle Cards” page.

Our overall impression of Wave 5 / Titan Masters Attack booster box is pretty darn good!  Fortress Maximus is the “buy-a-box-promo” for wave 5.  The only way to get Fortress Maximus really is to buy a Wave 5 booster box – or wait and buy it from a reseller.  As for Titan Cards: we had Trypticon in Wave 4 in 2019, and Metroplex in a deck box in 2018.  Omega Supreme was available in a Loot Box in 2019.  Man, I love these big titan cards!

One cool thing here is that you can make a Fortress Maximus Deck right out of the box.  This Titan plays a little differently than other Character Cards.  Fortress Maximus starts off in play with Cerebros as a head.  Like so: 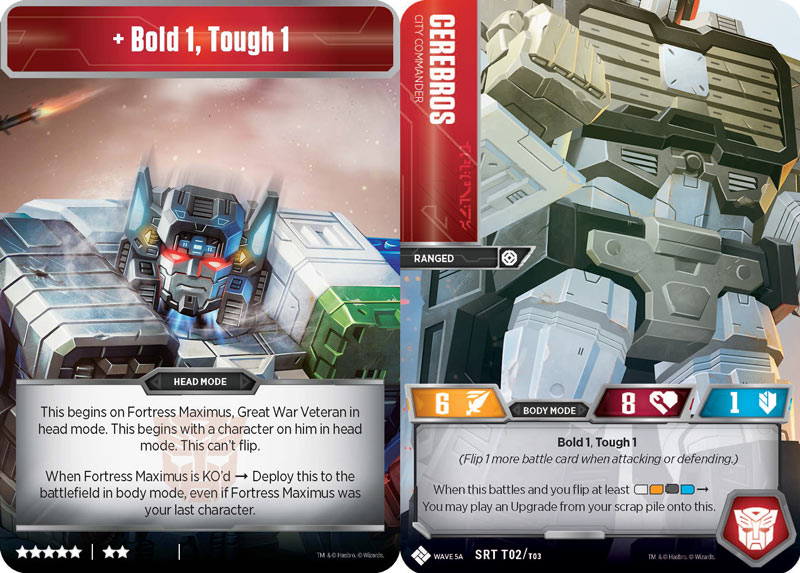 And when Fortress Maximus is KO’d, you flip the Cerebros headmode over into botmode.  Now you have a body without a head, so you get to bring in Emissary in Headmode.  And when Cerebros is defeated, you flip over the headmode of Emissary to Botmode. 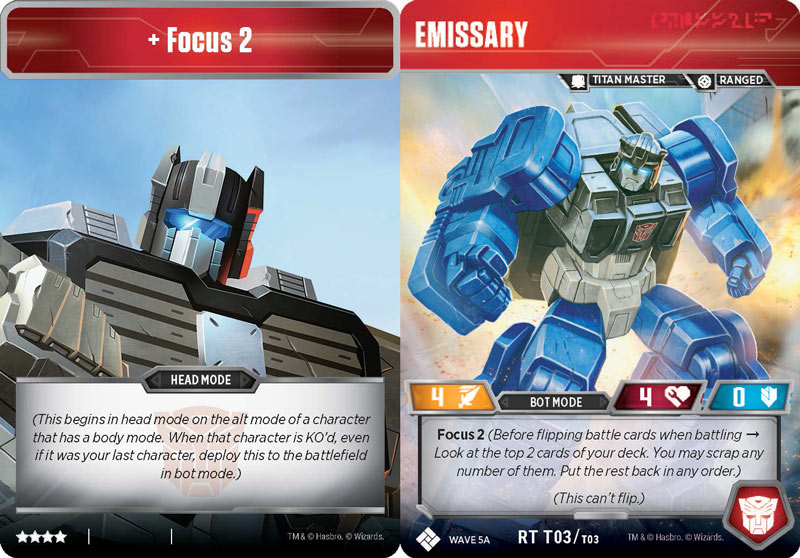 Fortress Maximus is 14 stars, Cerebros is 7 stars, and Emissary is 4 stars.  So you kind of get 3 characters in 1!

With the 180 Battle Cards you get in to the Booster Box, you should be able to scrape together enough cards to make a semi-decent Fortress Maximus Deck.  And you can tweak your deck with cards from older sets, and improve it even more by trading with friends.

And then we have one more weird set of cards – “Sky Shadow Plane” &
“Sky Shadow Tank”. They don’t flip. They are a Titan Master and a Combiner!  The common “Sky Shadow Sync” allows you to combine them with Ominus!  This is a confusing, but utterly cool Combiner. 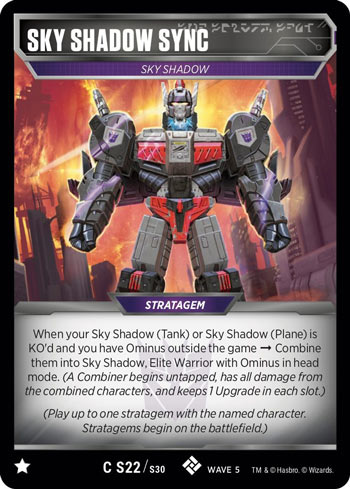 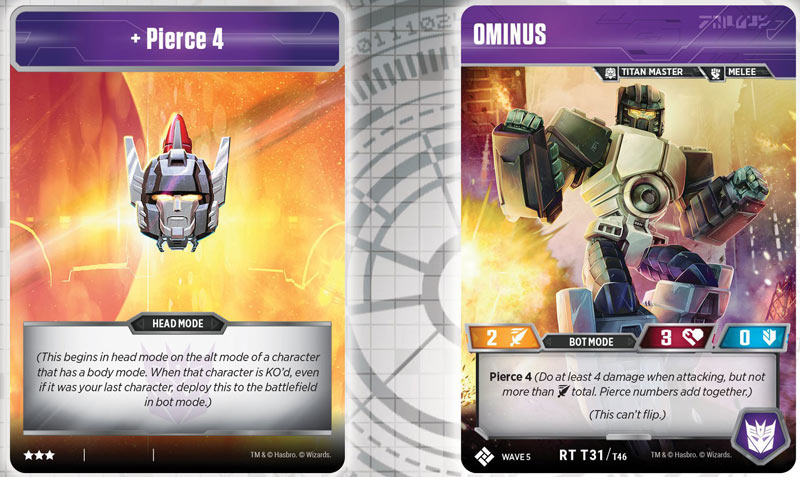 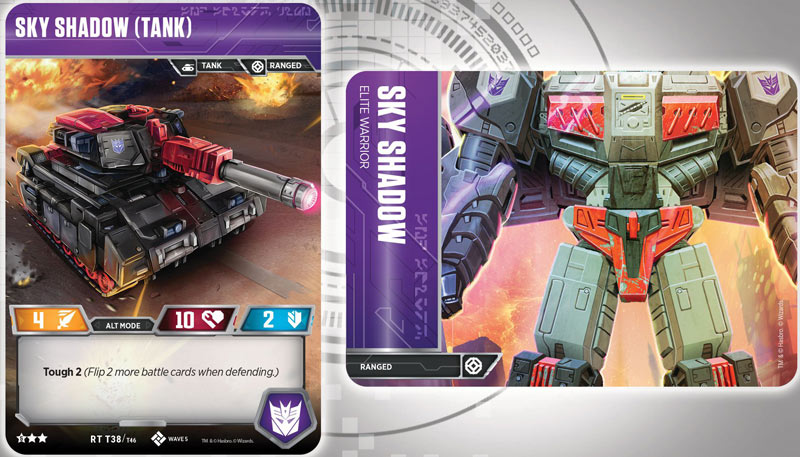 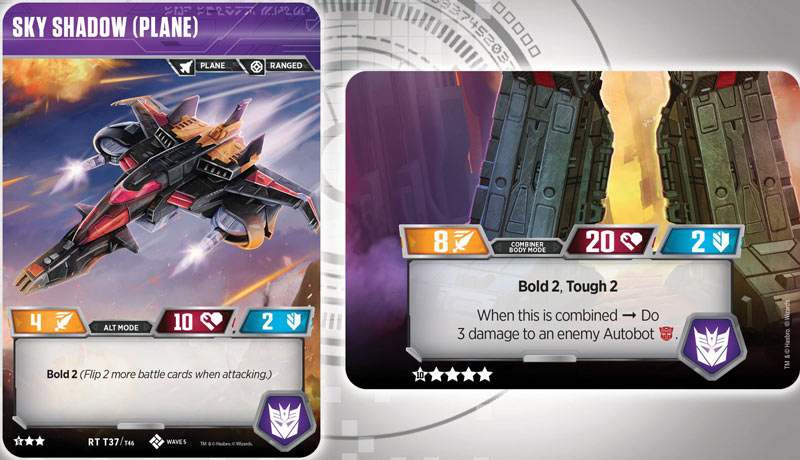 I also like it when manufacturers include some playable common & uncommon cards in their TCG sets.  And there are some nice Transformers Character commons & uncommons in this set like: Beachcomber (C); Topspin (U); Optimus Prime (U); Twin Twist (U); and Apex (U). 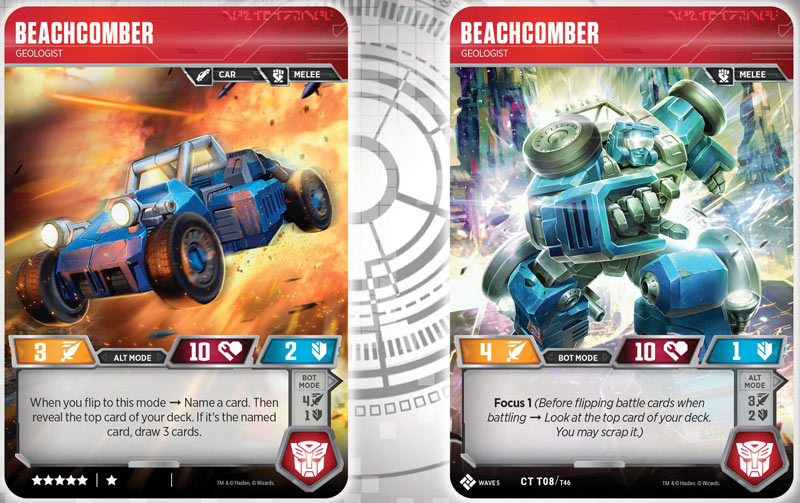 I am not sure how gimmicky the heads are going to be?  They are going to need some playtesting by everyone to see how they pan out.