As if things weren’t already fucked up as it is, aside from cards being completely overhauled, there have also been new rules revealed to be implemented when the reboot begins. And as fascinating as they are, I would first like to pick up where I left off and talk a bit about the cards. Yes, I know a half-deck where everything is as basic as basic gets is a bit presumptuous, but even with that things look a little dubious. Critical Triggers are 15k shield now, Heals are 20k (which is going to be hilarious when you think about how you’re losing 20k shield for a 15k shield in some cases) Front Triggers are 15k, and Draws are confirmed to still be 5k, thus proving that Draws truly are the worst.

On top of that, it would seem that there’s variety to the shields of individual units at long last. Reboot Gallatin is still 10k vanilla, but it has 10k shield BASE to make up for it. With everything else it’s pretty much business as usual: if you have a skill, you get less shield, but you could probably get it back if you’re willing to lose power for it. Looking at the half decks, it seems that for things like Grade 1s 8k and 10k shield is the base assuming everything is vanilla, with 7k power and 5k shield base being for the ones with skills. The good ones, anyway: V Series Dragon Monk Gojo is 7k but still has 10k shield, primarily because his ability’s a little bit shit. G2s have 10k power and 10k shield as the base, with 9k and 5k shield for those with skills. All this sounds a bit unfair, but I should point out Grade 3s are now 13k AS STANDARD. It’s all about your 18k columns now, and I guess I’ll make allowances for higher shield if all they do is let you reach that.

But yes, not much point speculating further until we get Trial Decks, as in, cards that actually do interesting things, so let’s talk about the new rules we get. The first one that caught my eye was G Assist: no longer do you need to remove 2 G Units, now you just need to ditch 2 cards from the hand. In all honesty Vanguard should have had this clause from the very beginning, but a reboot would be an ideal time to start again with a better game if nothing else. Plus it’ll keep those who want to cling to G Format until November when it won’t be legal anymore happy until Premium Format ruins everything.

Second rule is that a player can now Stride regardless of the Grade of the opponent, as long as you’re Grade 3 at the start of the ride phase, or both players are on Grade 3. Again, that seems to be there to directly address the bullshit that was Grade 1 Rush, but even then I still think that it’s inherently still biased towards G1 Rush as a whole since they’re basically Deletors, except considerably more basic. That is, until you realise the other rules that are being enforced in conjunction with this one. More defense from Triggers combined with the Stride clause definitely discourages it though. In all honesty, without the trigger change I’m pretty sure people would want to still give the damn thing a shot. Outside of that, I have a feeling that decks that want to go fast and hard will abuse this in Premium Format, especially if they go first. Off the top of my head, I’m thinking of running the Aleph and Blazing Flare series with old Conroe as the starter just to Superior Ride to Grade 3, so I can Stride even when the opponent hasn’t even reached Grade 3 themselves. If I want the Imaginary Gift I can just main 4 Overlords or whatever is inherently better than him. Granted, this won’t be legal until November when Standard could shape up to be equally as viable as Premium decks, but I think there’s room to abuse it certainly. Just about the only thing holding it back are the minuses involved.

Third rule’s a pretty interesting one. Mulligan rules are now different. Instead of just shuffling your mulligan back to deck, all cards you send back go to the bottom of the deck, you draw, and THEN you shuffle. I suppose one would argue that it means that you’re less likely to draw the same card back again, but I would say that it wouldn’t really reduce chance all that much for it to be especially relevant. It’s not as though the Grade 0s you’re putting back are the only ones in there. Still, a change is a change, no matter how odd. 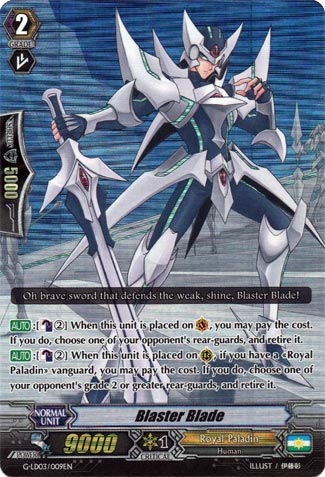 Fourth rule is that guardians can now be any Grade: you don’t have to use ones that are equal or lower in Grade than your Vanguard. Yet again, I think this was definitely to nerf G1 Rush specifically (you budget players are getting the fucking shaft amirite), because it doesn’t seem to be for the benefit of any other deck. By guarding with anything, they can no longer take advantage of the early game when guarding is more restricted and thus inflict stupid amounts of damage early. Everything else is generally unaffected because of course they don’t want to throw stronger, higher Grade stuff away anyway because they need their offense.

Fifth and final rule’s about something a bit obscure, although simplifying this rule means less people bitching about it (and means I don’t have to type out the ruling online). 1/Turn skills now no longer need to proc as soon as you meet the requirements. Now, if you meet the requirements but choose not to use the skill, if you haven’t done so already, you can choose to use the skill later as long as you meet the requirements again. This won’t apply to compulsory skills like Tidal Assault of course, but in Premium Format I see cards like Crayon Tiger becoming a bit more bullshit than before. Also wondering what that’s going to be like for people using Dauntless Drive Dragon, holding it off until the Legend or the End has had its fun.It all depends on how much it would hurt to give up Imaginary Gift for this sort of play, but for now, I think simplifying the game a bit further can only be good for newbies and helps to unlock some new plays for veterans.

Guess I should probably wrap this up with a talk on formats. We have Standard, which only lets you use the new cards, G Format, which is G-BT14 and the new Bermuda set and below, which is only tournament legal until November, and Premium, which will come in effect when G Format ends. Which format am I playing? Well, I’m inherently biased towards Standard at the moment. I really do think that Standard and G Format ought to be kept far away from each other and that the two formats shouldn’t be mixed together. The only people who like Premium are those who want to keep abusing their broken shit or discover new broken shit, or those who want to not throw away their old cards, and those people probably wouldn’t give too much of a shit of how bad the meta actually was. I can only speak for myself of course, but a part of me wants to return to a time when the game was slow enough to appreciate properly. I reserve interesting plays for Mid Game and beyond, when it’s time to use what you learned about the opponent in Early Game to open the taps and start actually trying to win. And I don’t think Premium will allow a lot of that: it’s just about trying to find the most broken bullshit from the huge pool of cards. You could make the argument that if that’s what they don’t want, they can fuck off and play Standard, but then what about the very new newcomers? They’ll be stuck in the kiddie pool forever without having gotten the old cards only available by jumping on the wagon earlier. They get enough shit being poor, they don’t need the elite pool being full of bastards. Oh wait, too late.