Parks is an artful new board game designed by Henry Audubon and published by Keymaster Games.  I saw this at GenCon and purchased it purely because of the very appealing art depicting America’s national parks.  It just so happens that it’s actually an excellent board game, made only better if you are one with an interest in the nation’s parks. It’s for 1-5 players who each act as hikers making their way along a seasonal nature trail.  The goal is to have the most points at the end of four seasons, gained by visiting parks, taking photos and meeting a personal goal.  I highly recommend this game as an addition to any board game collection.

Here is a look at the brilliant nested-box-design for the contents:

How do you play Parks?

Parks is played with 1 to 5 players.  It’s great to see the option to play solo, but I’ll describe the play for 2+ players first.  Please note: This is rudimentary discussion on the how the game plays.  There is a great tutorial / playthrough on the KeyMaster Games website that does a great job of teaching the game.  We highly recommend watching their video if you would like more details.

Set-up includes selection of the first Season card (with a special feature and weather pattern that affects gameplay for that round) and creating an initial trail.  The first set of Park cards to visit is revealed.  Each park has a set of requirements that must be filled in order for a hiker to visit – various combinations of forest, mountains, sun and water tokens.  Each park has a point value ranging from 2 to 5.

Each player’s turn consists of moving one of their two hikers along the trail to a site/tile of their choice and performing the action called for on that site.  Basic actions include collecting forest, mountain, sun and water tokens that will be used to visit parks.  There are also special actions that allow for buying canteens or gear, taking photos, switching tokens, reserving parks, and visiting parks.

Some of the fun actions that cards let you take:

There is some strategy in navigating the trail sites to get the desired mix of tokens you want.  And you can’t visit a site with another hiker already there unless you decide to build a Campfire.  Using canteens and other gear can make it easier to visit parks and earn points.  After any park is reserved or visited, a new Park card comes out – so that there are always three parks available for all players.

A season is complete when all the hikers have reached the trail end, which is the last opportunity to reserve a park, or to turn tokens in for an actual visit to a park.  The player with the camera gets a chance to take a photo.

Then the hikers are returned to the trailhead and a new trail is created with one additional tile added in for each new season, with all tiles randomly laid out.  A new Season card is revealed and play begins again.

The game is complete when the players have taken their hikers through four seasons.  Each player counts up the points on each of their Park cards and adds in the number of photos they may have taken.  They also add in any points they may have earned because of attaining a personal goal, as outlined on their chosen Year card.

The solo game plays very similarly except that the two hikers are trekking alongside park rangers taking care of the trail, each taking their separate turns.  The Event cards are used exclusively for solo play, with events triggered by rangers’ sun and rain/water collections. A solo player would be considered to have done well with 25 or more points at the end of the four seasons.

All in all, the positives far outweigh the minor disappointments.  It’s a very easy call to recommend this game as everyone who’s played it with me has been a fan.  It’s another one of those family-friendly uplifting games that you can have fun playing whether you win or lose, and it’s a nice alternative to sci-fi and fantasy-based games.  The parks are all real places you can go to and may have already visited.  This is a game people can really connect with, and I’m happy to have it in my collection. 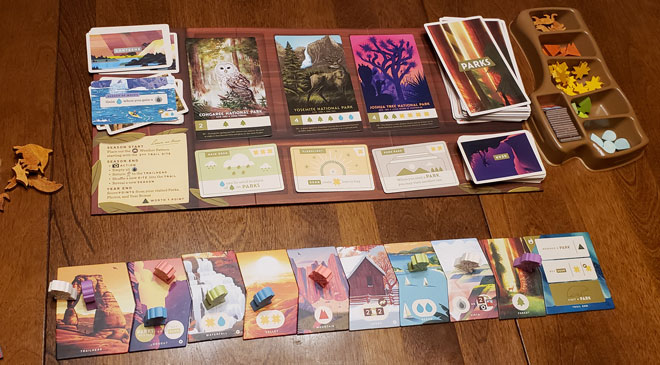