Home Yu-Gi-Oh! Yu-Gi-Oh! Featured Writers Yu-Gi-Oh Fists of the Gadgets – What You Should Know 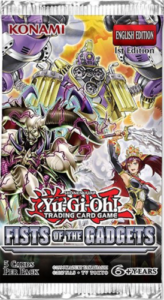 I guess somebody at Konami decided to turn up the heat. Hello Pojo Readers, Crunch$G here to tell you everything you should know about the new Fists of the Gadgets set. In this set we see support for archetypes like Fire Fists and Gadgets, some new Summoned Skull retrains, and Cyberse support from an OCG Structure Deck that the TCG never got. We got a lot of TCG World Premiere cards in this set and a good amount of OCG Imports as well, not to mention some reprints thrown in for good measure to help put the Fire Fist and Gadget cards back in print along with adding a few extra random reprints in here as well to help drive the value of certain cards down and making them easier to access. There’s some fun stuff in here, so let’s get to talking about it. 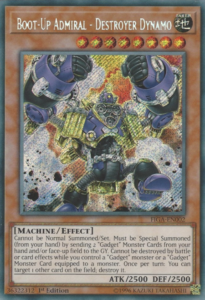 First up is some of the new support for the Gadget archetype, mainly to work with the Gadgets from the past. Boot-Up Corporal – Command Dynamo is a Level 4 EARTH Machine that can Special Summon itself from the hand by targeting 2 Gadgets you control and/or in your graveyard with different names and equipping them to it, and it gains 1000 ATK for each monster equipped by this effect. Boot-Up Admiral – Destroyer Dynamo is a Level 8 EARTH Machine that cannot be Normal Summoned or Set, must be Special Summoned by sending 2 Gadget monsters from your hand and/or face-up on your field to the graveyard, cannot be destroyed by battle or effects while you control a Gadget 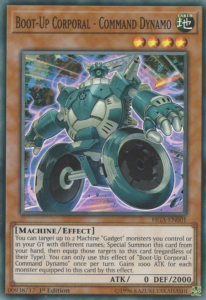 monster or a Gadget monster that’s equipped to a monster, and once per turn can target and destroy another card on the field. Boot-Up Order – Gear Change is a Continuous Spell that upon activation lets you target any of your Gadget monsters equipped to a monster and Special Summons them and can also let you discard a card to search for Boot-Up Admiral – Destroyer Dynamo. Boot-Up Order – Gear Force is a Normal Trap that when an attack is declared and all monsters you control are Machines (min. 1), you can destroy Attack Position monsters your opponent controls up to the number of Machines that you control. Finally, Powerhold the Moving Battery is a Continuous Trap that Special Summons itself as an Effect Monster (Machine/EARTH/Level 4/ATK 0/DEF 2000) and then equips a Gadget from your hand or deck to this card, and if summoned this way it gains ATK equal to double the ATK of the equipped monster. 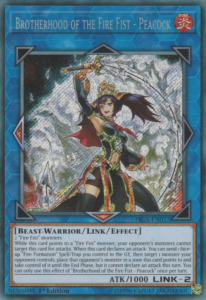 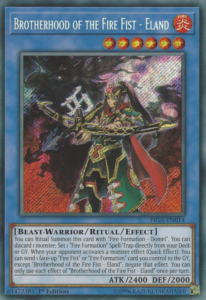 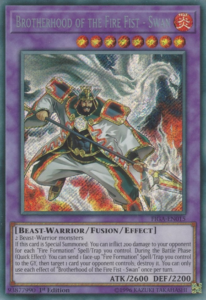 your deck, and when your opponent activates a monster effect, then as a Quick Effect you can send a face-up Fire Fist or Fire Formation that you control to the graveyard to negate that monster effect activation. Brotherhood of the Fire Fist – Swan is a Level 8 FIRE Beast-Warrior Fusion of any 2 Beast-Warriors, upon Special Summon deals 200 damage to the opponent for each Fire Formation Spell/Trap you control, and during the Battle Phase as a Quick Effect lets you send a face-up Fire Formation Spell/Trap you control to the graveyard to target a card your opponent controls and destroy it. Brotherhood of the Fire Fist – Eagle is a Link-2 FIRE Beast-Warrior with Bottom Left and Bottom Right arrows, needs 2 Beast-Warriors to summon, can only be Special Summoned once per turn, lets you activate Fire Fist monster effects without having 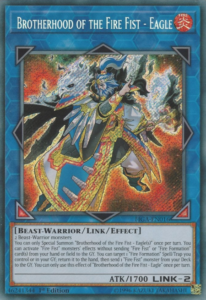 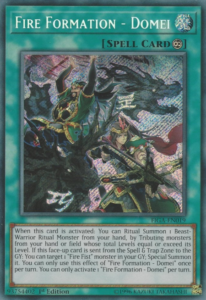 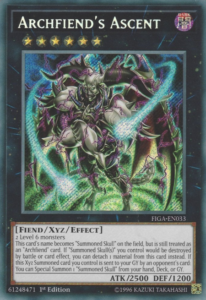 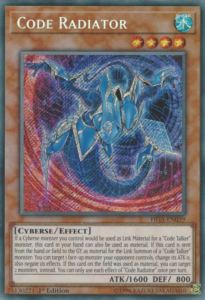 Finally for new cards, we have the Cyberse cards from the Structure Deck we never got, along with a extra card. Latency is a Level 1 LIGHT that Special Summons itself if added from the graveyard to the hand and lets you draw a card if summoned this way and used as Link Material. Swap Cleric is a Level 2 EARTH that if used as Link Material will let the Link Monster gain 500 ATK and let you draw a card. Defcon Bird is a Level 3 WIND that lets you discard a Cyberse to Special Summon it from the hand and when a Cyberse monster is targeted for an attack lets you double its ATK and DEF until the end of the Damage Step and swaps it to Defense Position. Prohibit Snake is a Level 2 LIGHT that discards itself from the hand at the start of the Damage Step if a Cyberse Link battles an opponent’s monster and sends the opponent’s monster back to 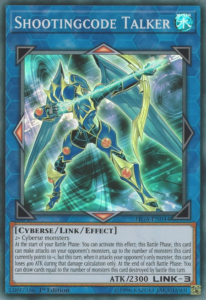 the hand, and when a Cyberse monster you control destroys a monster in battle while this card is in your graveyard, you can banish a card from your graveyard to target a Level 4 or lower Cyberse in your graveyard and add it to your hand. Code Radiator is a Level 4 WATER that can be used in the hand as Link Material for a Code Talker monster if you use another Cyberse monster as material for the Link Summon, and when used to Link Summon a Code Talker monster lets you target a monster your opponent controls, or two if this was on the field when used as material, and change their ATK to 0 and negate their effects. Spool Code is a Quick-Play Spell that negates a direct attack while you have 3 or more Cyberse monsters in your graveyard and summons up to 3 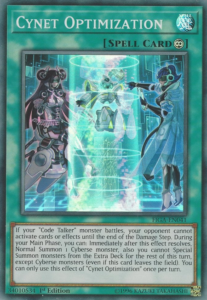 Spool Tokens (Cyberse/LIGHT/Level 1/ATK 0/DEF 0) in Defense Position and they cannot be used for a Tribute Summon. Cynet Optimization is a Continuous Spell that prevents your opponent from activating cards or effects until the end of the Damage Step if a Code Talker monster you control battles and during your Main Phase lets you gain an additional Normal Summon of a Cyberse monster, but you cannot Special Summon for the rest of the turn from the Extra Deck except for Cyberse monsters. Cynet Conflict is a Counter Trap that if you control a Code Talker and your opponent activates a Spell/Trap card or monster effect, you can negate that effect, banish that card, and prevent your opponent from using effects of cards with the same name until the end of the next turn. Code Talker is a Link-2 DARK with Up and Down arrows, 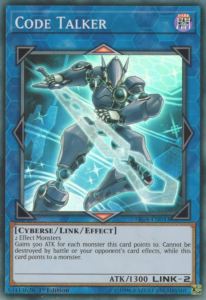 needs 2 Effect monsters as material, gains 500 ATK for each monster it points to, and cannot be destroyed by battle or opponent’s card effects while it points to a monster. Shootingcode Talker is a Link-3 WATER with Up, Left, and Down arrows, needs 2+ Cyberse monsters as material, at the start of the Battle Phase lets you activate this effect to attack monsters your opponent controls up to the number of monsters this card points to +1, but it will lose 400 ATK if it attacks the only monster your opponent controls, and at the end of each Battle Phase lets you draw a card for each monster it destroyed by battle. Elphase is a Link-2 WIND with Up and Right arrows, needs 2 Level 3 or higher Cyberse monsters as material, gains 300 ATK for each monster it points to, and if this Link Summoned card leaves the field, you can revive a Level 4 or lower Cyberse in your graveyard with its effects negated and you being unable to use it as Link Material during that turn. Talkback Lancer is a Link-1 with a Down arrow, needs any Level 2 or lower Cyberse as material, and lets you tribute a Cyberse monster you control to target a Code Talker monster in your graveyard with a different name and revives it to a zone Talkback Lancer points to. Finally, Rasterliger is a Link-4 with Up, Down, Left, and Right arrows, needs any 2+ monsters that aren’t Tokens as Link Material, can target a Link Monster in either graveyard and have it gain ATK equal to that Link Monster’s ATK until the end of the turn, and can tribute any number of your monsters it points to in order to destroy an equal number of cards on the field. 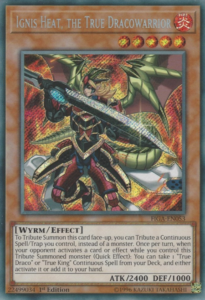 For the reprints, you got some of the necessities for the supported archetypes plus a few other things thrown in. The Gadgets we all know and love (Red, Yellow, Green, Silver, and Gold) are all in here as Super Rares. We got Fire Fist reprints for Bear, Gorilla, Spirit, Rooster, Cardinal, and Tiger King as Super Rares, which will be Spirit’s first holo print in the TCG. There are also a few Fire Formations like a Secret Rare upgrade to Tenki and Super Rares of Tensu and Yoko. Subterror Fiendess and The Hidden City get some worthwhile 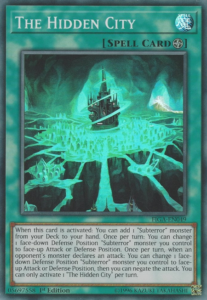 Super Rare reprints while Subterror Final Battle gets an upgrade to Super Rare. Scrap Recycler gets its first reprint ever as a Super Rare in this set. You also got the three main True Draco monsters in Majesty Maiden and Dinomight Knight as Super Rares and Ignis Heat as a Secret Rare. Amorphage Lechery, Sloth, and Goliath are all in here as Super Rares. Pendulum players get Chronograph Sorcerer and Mythical Beast Master Cerberus as Super Rare reprints in here. Finally, we got a Super Rare reprint for Starving Venom Fusion Dragon for players that love Super Polymerization.

The Gadget support overall is ok and the new Fire First cards are pretty soild. I would of wished for better Gadget stuff, but I’m satisfied with what Fire Fists got. The new Summoned Skull forms will be cool for collectors to have, they won’t be that competitive at all. The Cyberse support from the Structure Deck is nice to finally have over here, though there are a few cards missing from the Structure Deck in here because they are video game promos, which is fine I guess, but I would of liked the Starter Deck 2019 cards in here if we aren’t getting a 2019 Starter Deck at all. The reprints are great for the Fire Fist and Gadget players along with some meta relevant reprints for Pendulum, True Draco, and Subterror players as well. It’s a pretty well rounded set overall.