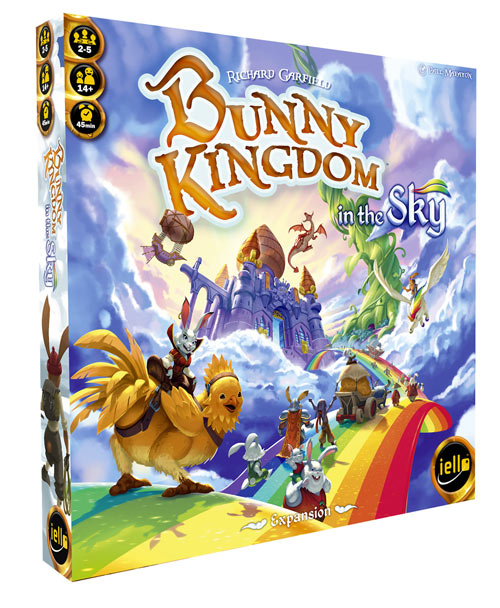 A Glance at the Original Bunny Kingdom Board Game

Bunny Kingdom might look and sound like a cutesy little kids game, but don’t let the bunny theme fool you.  This game is not a children’s game, and is a lot fun for teens and adults.  The original Bunny Kingdom is a game for 2-4 players, and is recommended for players’ aged 14 & up.  This game mixes a lot of fun elements from a variety of games:

Bunny Kingdom in the Sky Expansion

I am not going discuss Gameplay of the Original Bunny Kingdom (BK) Game.  As I said above, my wife and the rest of my family love the original game.  And you can read our review full here.

So, let’s take a look at the expansion.  I’m going to try to cover all the bases of what’s new in the Bunny Kingdom in the Sky expansion.  You’ll need a rudimentary understanding of the base game to understand the jargon I’m using below.

Bunny Kingdom in the Sky makes it possible to play with 5 players!  The original game had a maximum of 4 players.  This 5th player addition could be worth the price of the expansion alone for many Bunny Kingdom owners.  In addition to the Red, Pink, Yellow and Black Bunnies in the original BK game, you now get a big bag of Purple Bunnies!  You also get a few small bags of the original colored bunnies.

A New Side Board – The Great Cloud Board

The new Bunny Kingdom Great Cloud Board is essentially a sideboard that is 13″ x 10″, and is placed next to the main BK board from the original game.  The Original BK Board is 10×10 grid that and has 100 squares.  The new sideboard in not symmetrical and adds an additional 31 squares to use.

The new Great Cloud sideboard is essentially an additional area to place bunnies and get additional resources. But your bunnies and new resources are up on a cloud, and you have to figure out a good way to use them with your fiefs on the ground.

The grid on the new Great Cloud Board is not square.  It has 5 rows.  Rows vary in width from 5 squares to 7 squares.

You get 7 new City figurines, and some of these have pre-fixed positions on the Skyboard.  The most bizarre new city is the Carrotadel.

There are 20 New Building Tokens.  These also mostly have pre-fixed positions on the skyboard.

This expansion introduces 2 new “Rainbow” building tokens.  The Rainbows act similarly to Sky Towers from the original game, except you are connecting a fief on the main board to a fixed location on the Cloud Board.

And then there are two “Chimneys”.  During each Harvest, you get to select a basic resource present in the Fief that includes the chimney on the skyboard, and rain that resource down on all your fiefs below on the main board.

You simply add all 50 new cards to the original deck, and shuffle them in at the start of the game.

Coins are probably the biggest change in gameplay from the original game.  Coins give you Golden Carrots at the end of the game.  You can obtain coins two ways.

And Trade is one additional way of scoring Golden Carrot points at the end of the game.  You score all your points the old-fashioned way from the original game, and then add in your Trade points.

You already know that I love Bunny Kingdom, but what about this expansion.

Final Thoughts on Bunny Kingdom in the Sky

I received this Bunny Kingdom expansion as a Father’s Day gift from my daughter.  We were planning on testing this with 4 players (me, my wife, my daughter, and my son-in-law).  But then, one of my son-in-laws gaming buddy’s stopped by, and we were still able to play Bunny Kingdom.  This is something that we could not have done in the past.

At first, this expansion appears a bit daunting and overwhelming, but after a playthrough or two, the Great Cloud Board expansion is fairly simple concept to grasp.  Gameplay does change a little, but not as much as you might expect.  There are some new ways to victory, but the old ways to victory can work just as well for you.

I think the original game might have intended for people to try to make little fiefs all over the board as a path to victory.  It seemed in our games, more often than not, players tended to build one large fief and cram a lot of resources into it.  The “District” Coins now offer a new path to victory, by rewarding players for building small fiefs in several places on the boards.

I know that I listed a handful of cons above, because I think you should be aware of them.  To me, the Pros outweigh the Cons.  All in All,  Two Big Bunny Ears up for me!  I highly recommend this expansion to Seasoned Bunny Kingdom Players.  It breathes some new life into a game you might have played like crazy over the past 2 years.