Bunny Kingdom is a board game from iello games.  Bunny Kingdom was designed by Richard Garfield. Mr. Garfield started the Trading Card Game Genre with his Magic: The Gathering card game. He also created over 20 other popular games including: King of Tokyo, RoboRally, Netrunner TCG, Star Wars TCG, Hive Mind, and many other games.

Bunny Kingdom might look like a cutesy kids game, but don’t let the bunny theme fool you.  This game is not a children’s game, and is a lot fun for adults.  Bunny Kingdom is for 2-4 players, and is recommended for ages 14 & up.  This game mixes a lot of fun elements you might find in some of your other favorite games:

First let’s look at the gameboard.  The board is a 10×10 grid with obviously 100 individual territory squares for each player to build a kingdom.  Some squares can produce resources like wood, carrots or fish.  Other squares are blank fields or mountains that can let you build cities, or farm/mine other resources.  There’s also a scoring track to track game points.

There are a total of 144 rabbit figurines.  That’s 36 bunnies for each color.  You place your bunnies on territories and expand your personal kingdom.  Each continuous territory you control is called a “fief”.

Cities are buildings and they come in 3 different strengths.  The tower’s spires represent each figure’s strength.  There are a total of 24 building tokens in the game.

Now let’s look at the cards.  There are a total of 182 exploration cards: Territory Grid Cards; Building Cards; Parchment Cards; Farms; Camps; and more!  Let’s take a look at a few examples.

Obviously 100 of these cards are the grid cards – there is one card for every territory on the grid.  If you draft a grid card, you get to place a bunny on that area.  You now own that area for the rest of the game.  If that territory produces a resource, you also now produce that resource. 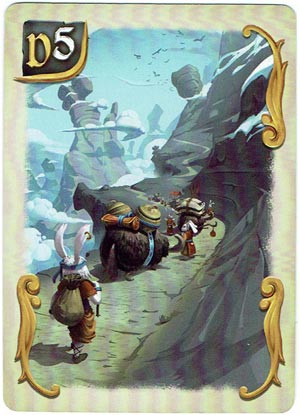 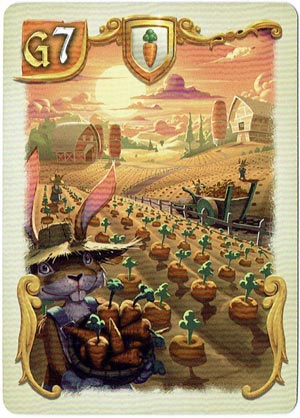 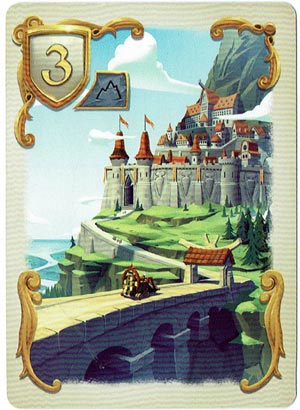 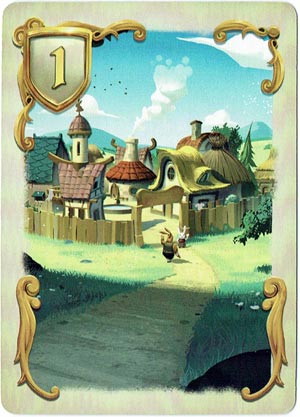 City Cards allow you to build cities on territories you already control.  Three strength cities can only be built in mountain locations. 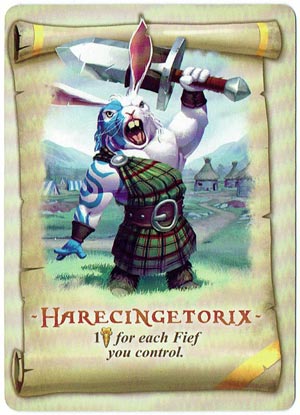 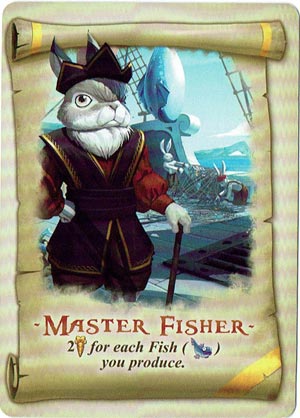 Even More Cards: There are also other cards that provide additional resources, treasures, camps and more.

The game is played over 4 rounds.

In a four-player game, each player is dealt a total of 10 cards.  Each player examines their hand and selects two cards of their choosing and places them on the table in front of them.  The remainder of the hand is temporarily set aside.

Once everyone has chosen their two cards, everyone plays their cards:

Once everyone has played their two cards.  They will pass their remaining cards to the person on their left or right depending on the round.  You again select two cards just like you did before.  You Rinse and Repeat until all 10 cards have been drafted and played.

Now you have the opportunity to build your cities, camps and resources.  This is optional.  Since there are four rounds, you can elect to wait for a later construction phase if you wish.  Cities and Resources and Camps cannot be moved once you place them.

You now Harvest your Golden Carrots from all your fiefs.  Golden Carrots are calculated by multiplying Strength x Wealth for each fief and adding them together.  Bunnies multiply and so do you!  Strength = the total number for spires/towers from your cities.  Wealth = total of number of different resources your fief produces.

Play the next round:

Once everyone has calculated their points from their Golden Carrots you play another round.  Deal out 10 more cards to each player and repeat the Draft/Construction/Harvest Phases until you’ve played a total of 4 rounds.

After all 4 rounds have been played, everyone Reveals their parchments and scores them.  Our family usually lets the person in last place go first and score each of the parchments.  After all parchments have been scored, the person with the most total Golden Carrots points wins the game.

After all is said and done, I love this game.  We have a big gaming family, and this game got played more than any other game over the Holiday season of 2017. It’s skillfully combines Trading Card Game Drafting and Area Control.  The board does get busy at the end of the game, but that is part of the crazy fun.  The game does not feel like it will get stale over time, as every game gives you different paths to victory.  It’s up to your drafting prowess to skillfully hop your way to victory.   This game will definitely stay in my collection.

The retail price of this game is $49.99, and that feels about right for all the components inside.  You can sometimes find it cheaper that retail price.  Check the current price on Amazon.com.

All in All Two Big Bunny Ears up for me!