Winter is coming, and the hive isn’t big enough to support the entire colony over the coming months.  The Queen Bee will ask you a few questions to see if you’re worthy of sticking around.  If you don’t have a “Hive Mind” you’ll be ousted from the beehive.

Hive Mind is a Family Board Game from Richard Garfield.  Richard Garfield is the mastermind who created Magic: the Gathering, King Tokyo, Bunny Kingdom, and many other popular games.

Hive Mind is fun party game that supports up to 12 players.

This makes Hive Mind great for large families, parties and gaming groups.  Hive Mind is super-easy to learn and super-easy to teach.  The instruction booklet is nicely sized, with a large font, and well laid out.  The goal of this game is to try to think like everyone else at the table by having a “hive mind”.  Instead of there being one winner like most games, in Hive Mind there is one loser who gets squeezed out of the hive for not thinking enough like everyone else. 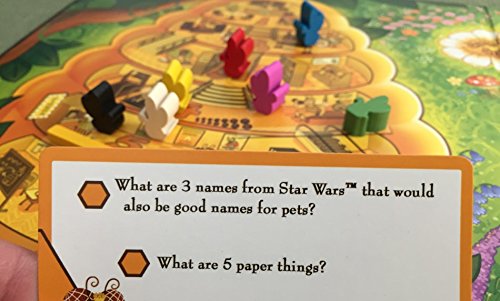 You will try to answer a variety of questions harmoniously with everyone else at the table.  Everyone in the game is represented by a Wooden Bee Pawn Meeple … “Beeple”.  There are 12 different Beeples in the box.  Everyone takes their Beeple and puts it on the board near the top of the beehive.  During the course of the game, the Beeples will buzz around the hive (up and down).  If you do well during the game, your Beeple may move up.  If you do poorly matching others with your answers, your Beeple will move down in the hive.  As soon as one or more Beeples exist the hive, the game ends.  Everyone still left in the hive wins, and they all survive the winter.

Everyone’s answer sheets are then tallied.  Then, based on where the Queen Bee is on the Garden Track, some Beeples will move up and/or down in the hive.  When one or more bees leave the hive, the game ends, and everyone still left in the hive survives the winter and they all win the game.

It’s Thanksgiving night and the family is playing Hive Mind after a lovely turkey dinner.  Teenager Tommy is the active player.  Tommy takes the die and rolls a 3.  Tommy moves the Queen Bee 3 spaces and lands on the double bee flower.  That indicates two Beeples will move down the hive at the end of Tommy’s turn.  Tommy picks this card (below). 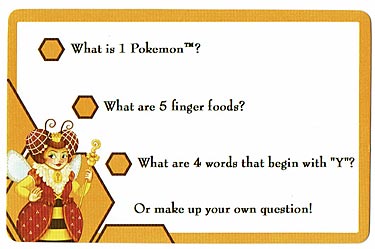 After the timer is up, Tommy reads his answer aloud: “Charizard”.  He gets 2 other matches at the table and thus gets 3 points (one for his own answer).  Everyone else who wrote Charizard also gets 3 points.  Next up is Anna.  Anna had a different response.  She says “I wrote “Pikachu”.  4 other people wrote Pikachu.  They all get 5 points.  Grandma wrote: “What’s a Pokemon?”.  She gets one point because at least she matched herself.  Dad wrote “Who Cares?”.  He also gets 1 point.  Since two people are moving down the hive this turn, Grandma and Dad only had one point, while everyone else had 3 or 5 points, so Grandma and Dad move down the hive.

The die is then handed to the next person and play continues until someone leaves the hive.

The game is reasonably priced with a MSRP of $30 U.S.  But I bet you can find it for under $25.  Click here to check the current price on Amazon.com.

The game is very easy to teach.  You just basically read a question, and ask people to match answers.  There’s no intricacies here.

It’s fun for all ages!

The box says Ages 8 & Up.  That sounds reasonable.  Different ages can really change answers to questions.  I was playing with a group of 8 players ranging from teens to retirement age.  The Question was something like: “Name 3 Musicals”.  This is where you have to user your noggin based on your group.  The older players said answers “West Side Story” and “Hello Dolly”.  The younger generation had answers like “High School Musical” and “Beauty and the Beast”.

There are a lot of laughs.

You will laugh at a lot of people’s answers.  When folks can’t think of “5 words that end in the letter Z”.  They might write down something funny, and it might actually match up with other completely wrong answers.  We had two people write “because” – because it sounded like “z” at the end, and they each got two points for that!

The more the merrier!

I think this game plays best with 5 or more players.  I wouldn’t break this game out for 2-4 players.  The game gets better with every player added.

You can play with more than 12!

There are 12 different colored Beeples in the box, but there’s no reason you can’t play with more people.  If you have more than 12 people, grab a token from another game, or a coin, or something else to represent the other people.  More people will make the game take a little longer, but we usually offset this by starting everyone closer to the bottom of the hive instead of closer to the top of the hive.

There is a bit of strategy.

In order to stay in the hive, you want to think like the hive.  If it’s your turn to pick a card, then pick a question you know a lot of answers to.  Also, try to write down answers that match the age of the playing group.  Example: Answer movie questions with answers appropriate for the age/era the group you are playing with is.  Don’t answer “Minions” to anything if you are playing with a large group of senior citizens.

There are a lot of winners!

If you are playing with a group of 10, usually you will have 8 or 9 winners instead of 8 or 9 losers.  So almost everyone is happy at the end of the game.  And it doesn’t even suck losing.  This is a game you’ll have fun even if you are the only person to leave the hive.

You are going to miss a lot of good/easy answers.

One question I did horrible on was “Name 3 cookies people don’t like.”  Me: “Huh?  There’s a bad cookie?”  I wrote down a few cookies. Almost everyone at the table wrote “Raisin Cookies”.   I was like … yeah … that’s a good answer.  I did horrible that turn.  And I moved down towards the exit of the hive that turn.

This is a great game to break out for large groups, and especially with family at the holidays.  The holidays are right around the corner, and I highly recommend it!

Here’s a link to Amazon.com to check out more reviews from people who also have purchased the game.