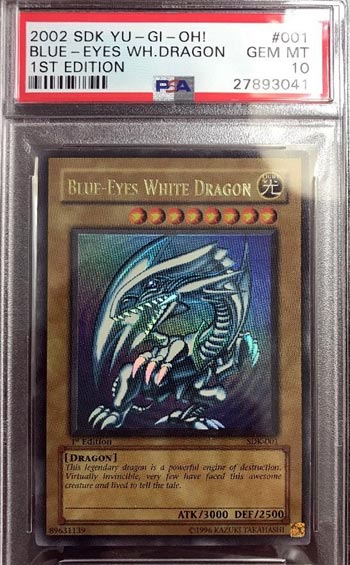 The dreaded Blue Eyes White Dragon finally cracks the countdown!  This is the only card from the original Starter Decks to make the Top 25.  This card sold for $600 in November 2017.  There are 26 1st Edition, PSA 10 copies out there according the PSA Population Report.  This isn’t the last Blue Eyes White Dragon on our countdown.  More are coming!

Starter Deck Kaiba could be a good investment if you have the money to speculate.  One recently sold for as low as $250.  If you are able to scrounge a PSA 10 BEWD out from the box, you’ve made a good return on your investment.  Some investors are starting to catch on though, as I’ve also seen this starter go for as high as $550.  Starter Deck Yugi might make a good investment as well.