Over the last 25 days of this year, we’ll be counting down the 25 Most Valuable Pokemon cards of 2017,   All values are based on actual sales of Pokemon Cards on eBay in 2017. 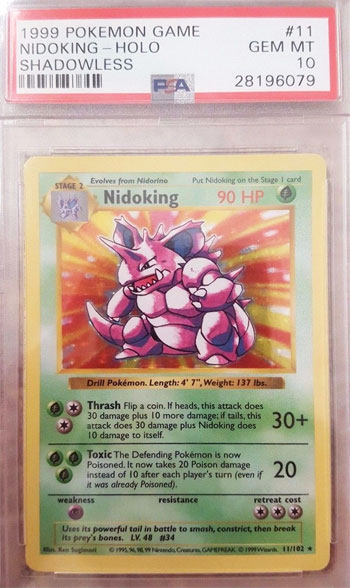 A beautiful Stage 2 holofoil card from the original Base Set. What’s interesting about this particular card is that it’s unlimited, and yet it’s shadowless.  Most people associate shadowless cards with first edition.  But many of the unlimited cards can be shadowless too!  Looking at eBay, it appears most of the Nidokings in the Base Set are shadowless (First and Unlimited Edition).   We have an explanation on shadowless versions in our Base Set Price Guide.

In November 2017, this copy of Nidoking sold for $2015.  It was graded as Gem Mint by the PSA.  Base Set Rare cards can command ridiculously high prices if they’re graded Perfect 10’s.  This is the only PSA 10 Nidoking that sold on eBay in the last 4 months. A graded PSA 10 1st Edition Nidoking would probably command an even higher price, but no first editions have sold recently.

Some quick notes on our rankings:  These are all cards you could have reasonably collected in the United States.  These are cards that appeared in Booster Boxes, Booster packs, Leagues, and/or Starter Sets. Pokémon TCG fans/players could have plausibly obtained these cards through auctions, trades and/or blind luck pulls.  There are no cards “prize cards” in our list.  Our Prices are based on Professionally-Graded, Gem Mint cards, which are independently certified on their condition. Here’s an article on Graded Pokemon Cards if you don’t know what Graded Cards are.