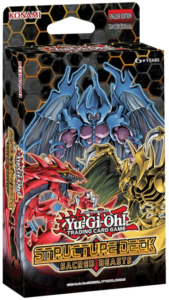 Time to support the Egyptian Gods 2.0. Hello Pojo Readers, Crunch$G here to give you the information you need to know about the latest TCG Structure Deck focused on the Sacred Beasts. Now, like Shaddolls last Structure Deck, this one was voted on overseas and got 2nd place, so it ended up becoming a Structure Deck. As the name suggests, we get new cards to help support the three Sacred Beasts to make them more feasible to play as an actual strategy instead of just putting each into a different Deck to build around one or making a Deck that uses all three Sacred Beasts, but not too consistently. Now using all 3 Sacred Beasts in a Deck feels consistent and feasible to do, so let’s see the support that helps us do that. 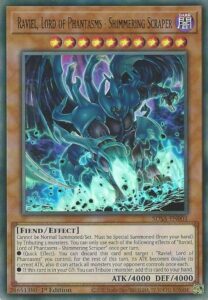 First off all the new cards for the Sacred Beasts, of which we got 9 new cards to help the strategy. Raviel, Lord of Phantasms – Shimmering Scraper is a new Level 10 similar to the original Raviel that can be summoned by tributing any 3 monsters, can be discarded to double the ATK of a Raviel, Lord of Phantasms on your field to let it attack all of your opponent’s monsters, and tribute a monster to add your Shimmering Scraper from the grave to the hand. Chaos Core is a new Level 3 that upon being targeted for a card effect or an opponent’s attack as a Quick Effect lets you send up to 1 each of Uria, Hamon, and Raviel from your hand and/or Deck to grave to have this card gain a Phantasm Counter for each and prevent you from taking damage that turn, and it can 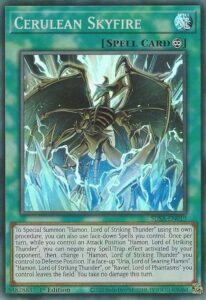 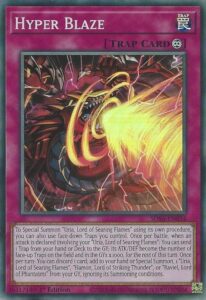 Lord of Striking Thunder, controlling a Hamon in Attack Position lets you negate a Spell/Trap effect by switching your Hamon to Defense Position, and prevents you from taking damage if one of your Sacred Beasts leaves the field. Opening of the Spirit Gates is another Continuous Spell that upon activation lets you search any of the Sacred Beasts or a monster that lists any of the Sacred Beasts in the effect text, can let you discard a card to revive any Fiend with 0 ATK and DEF from your grave in Defense Position, and lets you add a Continuous Spell from your grave to your hand if you control a Level 10 monster. Hyper Blaze is a new Continuous Trap that lets you use face-down Traps to summon Uria, Lord of Searing Flames, once per battle during an attack involving Uria lets you send a Trap from hand or Deck to the grave to let your Uria’s ATK and DEF 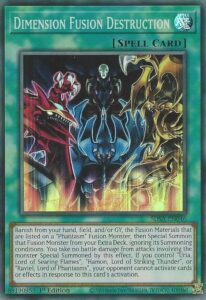 become equal to the number of Traps on the field and in the graveyards times 1000, and can let you discard a card to revive one of the Sacred Beasts ignoring the summoning conditions. Awakening of the Sacred Beasts is another Continuous Trap that gave you effects based on the number of the Sacred Beasts you controlled with different names with one or more letting you gain LP equal to the ATK of a monster the opponent Special Summons, two or more negating the activated effects of the opponent’s monsters, and three banishing any monster the opponent would send to the graveyard, and a final effect if you control a Level 10 monster to add a card from the grave to your hand. Finally, Dimension Fusion Destruction is a Normal Spell that lets you Special Summon a Phantasm Fusion Monster (which does include Armityle the Chaos Phantom as it has been changed to Armityle the Chaos Phantasm) from the Extra Deck, ignoring the summoning conditions, by banishing the Fusion Materials from your hand, field, and/or graveyard, prevents you from taking damage from battles involving the monster summoned off this effect, and if you control one of the Sacred Beasts then your opponent cannot activate cards or effects in response to this card’s activation. Also I should mention you get a Phantasm Token and a Phantasm Martyr Token to make use of the Token generating cards in here. 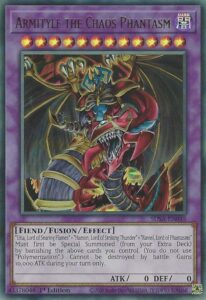 Now for all the reprints in this set. First off you of course get the three Sacred Beasts in here with Uria, Lord of Searing Flames, Hamon, Lord of Striking Thunder, and Raviel, Lord of Phantasms on top of the two related Fusions with Armityle the Chaos Phantasm and Phantasm Emperor Trilojig and the previously released Sacred Beast support cards in Dark Summoning Beast and Fallen Paradise. Some good monster reprints give us Phantom of Chaos, Phantom Skyblaster, Rainbow Dark Dragon, Tragoedia, Radian, the Multidimensional Kaiju, Chaos Hunter, Stygian Street Patrol, Farfa, Malebranche of the Burning Abyss, The Fabled Cerburrel, and Danger! Chupacabra! all being in here alongside good Spells and Traps like Terraforming, Set Rotation, Mound of the Bound Creator, One for One, The Beginning of the End, Pot of Desires, Owner’s Seal, Field Barrier, Swords of Concealing Light, Mystical Space Typhoon, Escape from the Dark Dimension, Shapesister, Imperial Custom, and Mistake.