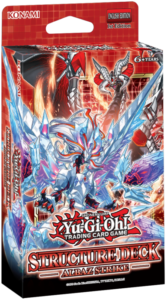 LORE! Hello Pojo Readers, Crunch$G here to tell you the latest about the newest Structure Deck release: Albaz Strike. This is the first time in a bit we had a Structure Deck that wasn’t an archetype voted on by the players in Japan, and honestly it’s the first Structure Deck since the Shaddoll one in early 2020 that’ll have any sort of competitive impact. Albaz Strike is one of the more hyped products of 2022 and thankfully it wasn’t pieced out into one of the side sets we get like many other Structure Decks have been. Today we’ll go through all the cards that are continuning this lore and all the reprints we know Structure Decks for and see how good it truly is. 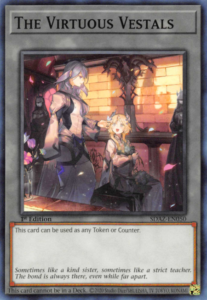 First off, I should mention the 5 Tokens you get inside every Structure Deck. Each Token has a different artwork depicting the lore up to this point and has little bits in their text to tell their story. You got two Tokens that go together with Albaz the Shrouded and Ecclesia the Exiled sitting next to a campfire together in Great Sand Sea – Gold Golgonda under a skeleton of a dragon. Another Token features all the Tri-Brigade monsters together. The Virtuous Vestals is a Token featuring a younger Ecclesia and The Iris Swordsoul together with Iris mentoring Ecclesia. The final Token, Aluber the mDogmatic, depicts Aluber the Jester of Despia and tells some of his story.

It All Comes Together 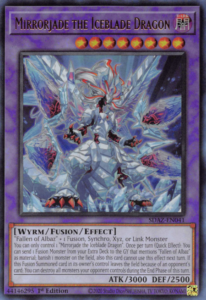 Now we get to all 9 of the new cards in this Structure Deck, tying all the archetypes so far in the lore together to create a coherient Albaz Deck. Tri-Brigade Mercourier is a Level 4 DARK Winged Beast who has a Quick Effect to be discarded when the opponent activates a monster effect while you control a Fusion that lists Fallen of Albaz as material to negate that effect, alongside the ability once it’s banished to add a Fallen of Albaz or any monster that mentions him in their text from the Deck to your hand. Springans Kitt is a Level 4 DARK Beast who can be Special Summoned from the hand if you control a Fusion Monster that lists Fallen of Albaz 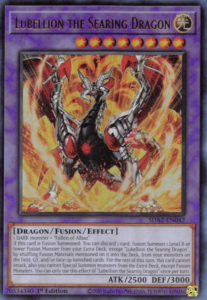 as material, also upon being Normal or Special Summoned will allow you to add a Branded Spell/Trap that’s banished, in the graveyard, or in your Deck to your hand and then makes you return a card from your hand to the bottom of the Deck. The Golden Swordsoul is a Level 4 LIGHT Spellcaster Tuner who can be Special Summoned from the hand when the opponent declares an attack to negate said attack, and then if you control a Fusion that lists Fallen of Albaz as material, you can destroy the monster that declared an attack, and also if a monster is banished face-up you get to banish this card from 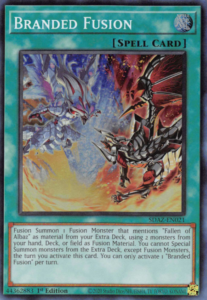 the field or graveyard to summon from your hand or graveyard a LIGHT Spellcaster whose ATK equals its own DEF. Branded Lost is a Continuous Spell that prevents the activation of cards or effects that would Fusion Summon a monster from being negated and prevents the opponent from using cards or effects when a monster is Fusion Summoned this way, also if you Fusion Summon a monster you get to add a Fallen of Albaz or any monster that mentions him in their text from your Deck to your hand. Branded Fusion is a Normal Spell that lets you Fusion Summon any monster that mentions Fallen of Albaz as material by using 2 monsters from your hand, Deck, or 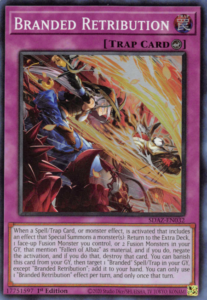 field as material, but you can only Special Summon Fusion monsters from the Extra Deck the turn you use this card. Branded Sword is a Normal Trap that banishes any number of Branded Spells/Traps from your graveyard to Special Summon that many Iceblade Tokens (Dragon/DARK/Level 8/ATK 2500/DEF 2000), and also you can banish this card from the graveyard to add a banished Fallen of Albaz or any monster that mentions him in their text to your hand. Branded Retribution is a Counter Trap where when a Spell/Trap Card or monster effect is activated that includes an effect to Special Summon a monster, you can return 1 Fusion Monster from your field or 2 Fusion Monsters from 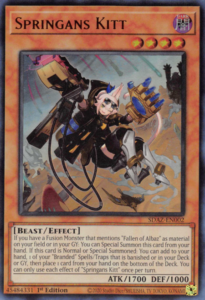 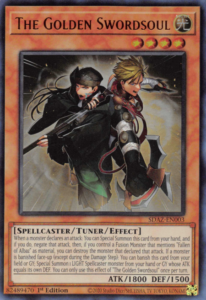 cannot use this effect again the next turn, also if it was Fusion Summoned and leaves the field due to an opponent’s card, you can destroy all monsters they control during the End Phase. Finally, Lubellion the Searing Dragon is a Level 8 LIGHT Dragon Fusion that needs Fallen of Albaz and any DARK monster as material and upon being Fusion Summoned can let you discard a card to Fusion Summon a Level 8 or lower Fusion that isn’t another Lubellion by shuffling the Fusion Materials into the Deck from the field, graveyard, or face-up banished pile, but this card cannot attack for the rest of the turn and you can only summon Fusion Monsters from the Extra Deck for the rest of the turn. 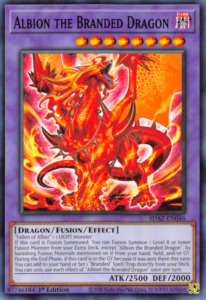 Now it’s time for the reprints. It wouldn’t be an Albaz Structure Deck without Fallen of Albaz of course, but there’s more lore related cards in here like Albion the Shrouded Dragon as an Albaz alternative. You also got Dogmatika representation in this Deck with Dogmatika Fleurdelis, the Knighted alongside some of the previous Branded Spells/Trap like Branded in White, Branded Bond, Screams of the Branded, and Judgment of the Branded. You even got the remaining Albaz Fusions up to this point with Titaniklad the Ash Dragon, Brigrand the Glory Dragon, Sprind the Irondash Dragon, and Albion the Branded Dragon. As for the other 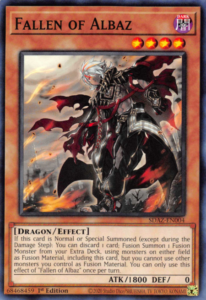 This is a great Structure Deck overall. The new cards in here are so powerful for an Albaz strategy, mainly the two new Fusion Monsters and Branded Fusion, but you got other decent cards like Tri-Brigade Mercourier, Springans Kitt, and Branded Retribution. The reprints related to the lore are alright, Albaz was key to get in here, Fleurdelis is nice to have, and Albion the Branded Dragon was the main Fusion we needed to get a reprint. Outside of that, there’s a ton of good to great reprints in here that offer a ton of value. When the only negative here is the fact they replaced Ice Dragon’s Prision with Warning Point, you don’t really have a real major issue here unless Ice Dragon’s Prison goes too long without another reprint. The only other negative that isn’t directly to due with this Structure Deck is the lack of Despia reprints since those are mandiatory to make this work as a competitive strategy, mainly Aluber the Jester of Despia, but he’s at least in Ghosts From the Past 2. I imagine a ton of players will want to play Despia Albaz, so this is a mandiatory buy for them, but other players could get this as well for all the great reprints it offers.