Switch & Signal is basically a Pick-up and Deliver type board game.  You need to pick up goods in one location, load them onto your trains, and deliver them to another location.  And you have to do it several times before the clock runs out.

The “Switch & Signal Board Game” box is a standard sized game box -11 inches x 11 inches x 2.5 inches.  Here is what you will get inside:

The two-sided gameboard has a map of the North America on one side, and a map of Europe on the other side.  The map is not to scale, but this is understandable because many big cities are very close to each other in the real world.  😉

The game board folds out to be about 22 inches x 22 inches.  Game play takes approximately 45-60 minutes.

Here is a very simple overview of gameplay.  As a team, you and other players need to pick up goods from different cities, and transport them to the destination port.

There are 9 trains at your disposals to pick up and deliver goods.  Each train can hold 1 good at a time.  There are 3 types of trains, and there 3 trains of each type:

The game starts you off with one train of each color assigned to a random location on the board.  Each location is determine by rolling 2 standard 6-sided dice.  This means that trains start in locations #’s 6, 7, 8 quite often.  In Europe, these locations are at the top of the board (seen above).

Each player is dealt a hand of 5 Action cards.  There are only 3 types of Action cards players will have in there hands.

Players can use all 5 cards during their turn if they want.  They can use:

When a player finishes their turn, they draw 5 new Action cards.

Players are trying to get empty trains into a Goods city, where a wooden cargo token is loaded on to their trains.  And then players try to get those loaded trains to the port city, where the cargo is unloaded.  For a standard game, if you deliver all 8 goods successfully – before time runs out, you win the game.

As we mentioned above, as soon as you have delivered your 8th good, you win the game. But if you run out of Departure Cards, you lose the game.  There are 18 Departure cards, but 2 are randomly removed each game, meaning you must win in 16 turns.  Well actually 17 turns, because you have a Starting card as well for the 1st player.

Departure cards can make or break your game.  Every player must reveal a departure card to start their turn and then carry out the card’s action.  You will usually have to deploy more trains, and move trains.

7 Time tokens are placed on the board for a normal game.  There are more in the box if you want to adjust your game’s difficulty.  You must remove time tokens from the board’s clock face:

If you run out of time tokens on the board, you discard the top face-down departure card from the draw pile.  Then you replace the time tokens.  Now you have one less turn to win the game!

There are helpers on the board that can assist you.  You can see the helpers in the photo above.  You can use each helper once per game. You cover them up with your Cover tokens after you use them.  The Logistician lets you reroll a movement die. The Dispatcher lets you move through cities without stopping.  And the Train Conductor lets you ignore moving trains of one color on a turn.

The theme is great and makes total sense.  You need to pick-up goods with your trains and you need to deliver those goods.  And freight trains do this all the time – so theming is wonderful.

Switch and Signal is fairly easy game to teach and play.  Setting up the board is a bit tedious, but the game play itself it fairly simple.  You flip over a Departure Card and take those actions.  And then you only have 3 types of Action card types to learn, and you take those actions.

It’s nice that the board is two sided.  It would get repetitive playing the same map over & over.  And, locations are actual locations in the real world – like: Chicago, San Francisco, New York, Barcelona, Paris, Amsterdam, etc.

The components are solid.  The trains hold cargo cubes, the dice are wooden, and the playing cards have nice card stock.

This is a true cooperative game.  Player give each other advice.  And you really need to listen to each other.  Players can share information about their hands.  So you can say something like: “If you can switch that signal to green, and open that junction for me, I can move the black train and hopefully get us to Paris.”

It feels good when you get on a delivery roll, and have open switches and green lights through several cities. 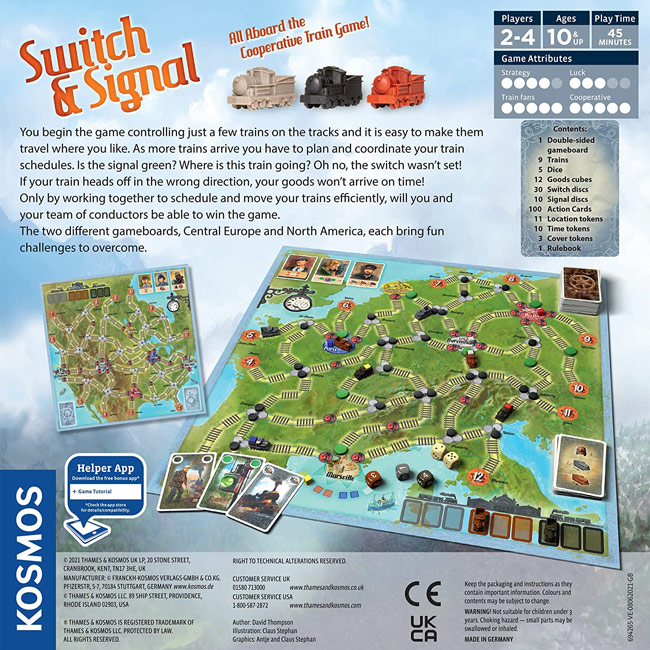 Lady Luck is a fickle mistress.

You can run into some streaks of bad luck in this game.  Here is an example:

You might start with your first three trains on spots #’s 6, 7 and 8.  Because those are the most likely rolls when bringing out trains with the two 6-sided dice.  The first player’s starting hand might consist of only Signal setting cards, and Switch setting cards.  So they cannot move any of the starting trains.  And now it’s the 2nd player’s turn.  They start with an Action card.  The action card might say “Bring out two more trains”.  And you roll a 7 and an 8.  Since you cannot deploy those trains because they are still in the starting block, you have to discard a total of 4 Time Tokens.  You haven’t done anything wrong, but you are already down 4 time tokens.

If get in a streak of bad rolls, and/or pull bad cards, you are probably going to lose.

There are a few ways around this, if you want to alter the rules a bit:

The box insert is nothing special.  But the box holds all the contents just fine.

I think this game plays best at 2 to 3 player counts.  You can play with four, but 4 players just might be too many cooks in the kitchen.

Final Thoughts on Switch and Signal.

This is a very interesting Puzzler/Co-op game.  The co-op experience is fantastic.  Everyone can contribute ideas equally, and it is smart to listen to everyone.  It is easy for one person to overlook something that might happen in the next turn, and hopefully another person at the table will see what can be coming down the line.

Your gaming group will have to adapt your strategies on the fly because you never know what the Departure Cards have in store for you at the beginning of every turn.

There is a lot to keep track of.  A Departure Card might bring out 2 new trains, and then the Departure card might have you move a bunch of trains on that same turn.  You can easily have trains smashing into each other, getting stuck at signals, and turning the wrong way, and heading back to their starting locations.

The first night we tried this game, we played 3 times.  And we lost all 3 games.  We ran into streaks of bad luck, and kept rolling 7’s when we were bringing out new trains.  We kept losing Time tokens like crazy.  Was it bad luck?  Was it bad play?  Is the game too hard?  I don’t know.  It was probably a combination of all 3.

We are not disgruntled yet though. We are getting together again, and going to give this game another shot … or two … or three …  ?

(Pojo addendum – We finally beat this game on our 4th attempt.  And it came down to the last card, and our last roll … phew)