The Transformers Trading Card Game continues to grow as its second set rumbles into stores TODAY!

RISE OF THE COMBINERS sees the battlefield changed forever as the mighty, towering Combiners come into play for the first time. Introducing a number of characters and mechanics into the Transformers TCG, certain cards from RISE OF THE COMBINERS Booster Packs allow players to race against their opponent to assemble and activate their team into Combiner mode while battling for victory.

Character Cards that are components of a Combiner character employ an exciting physical mechanic. Each card is the size of a standard Transformers TCG character card, but has a piece of the Combiner character on one side, and the Alt and Bot modes of a character on the Combiner team on the other. The cards have a reinforced hinge in the center, which allows them to be neatly folded when in play as one of several characters on a player’s team. 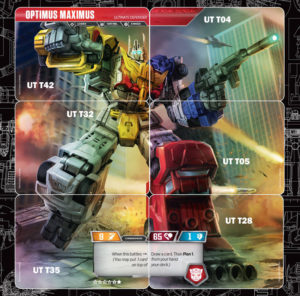 RISE OF THE COMBINERS Booster Packs will be available beginning March 1 in the US and certain other regions. You can find it where trading card games are sold, but fans can check their preferred retailer for availability. More info can be found online HERE.