Home Yu-Gi-Oh! Yu-Gi-Oh! Featured Writers Structure Deck: Order of the Spellcasters – What You Should Know 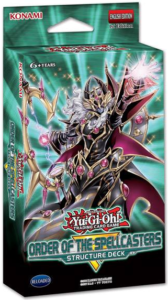 Have several 20-sided dice ready. Hello Pojo Readers, Crunch$G back here to tell you about what you should know about the latest Yu-Gi-Oh Structure Deck to hit the TCG. This time around it is a retrained version of Spellcaster’s Command Structure Deck that was released over a decade ago now modernized to be a more playable strategy. Ever since the Spellcaster’s Command deck was released in the 5D’s era and all its Spell Counter support, we have received the Pendulum Mechanic and how that can synergize with Spell Counters, so it was natural the new Spell Counter support was Pendulum Based, and there’s a lot of effects to break down, so I’ll get right on into it. 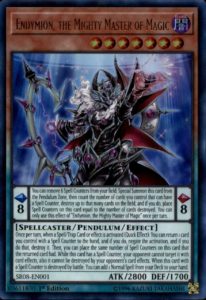 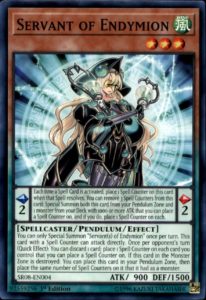 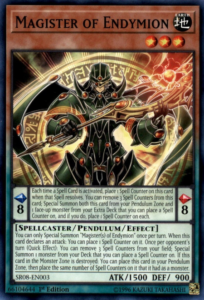 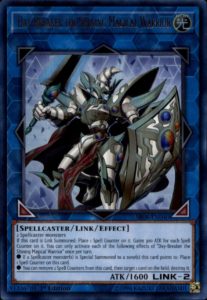 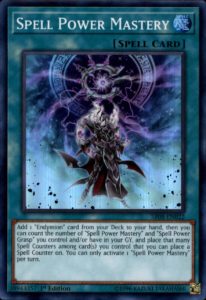 and gains counters she might of had as a monster. The final new monster is the Link 2 Day-breaker the Shining Magical Warrior, who has bottom left and bottom right arrows, requires two Spellcasters to summon, gains a Spell Counter upon being summoned, gains 300 ATK for each Spell Counter it has, gains a Spell Counter once per turn if a Spellcaster is Special Summoned to a zone he points to, and once per turn can remove 2 Spell Counters from himself to target and destroy a card on the field. As for new Spells (there’s no new Traps), Spell Power Mastery is a Normal Spell that upon activation lets you search for any Endymion card and then you can place Spell Counters on any cards on the field that can hold them equal to the number of Spell Power Mastery and/or Spell Power Grasp that you control and/or is in your graveyard. Endymion’s Lab is a Continuous Spell that is treated as Magical Citadel of Endymion while in the Spell/Trap zone, gains a Spell Counter when a Spell is activated and resolves, and if a Spellcaster is destroyed by battle then you can remove 6 counters from the field to Special Summon a Level 7 or higher Spellcaster from your hand or deck. Dwimmered Path is the final new Spell and upon activation lets you add a Spellcaster Effect monster from your graveyard to your hand. 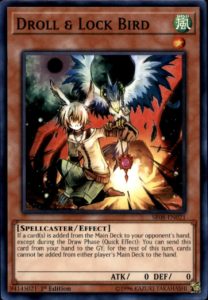 Now for the reprints in this deck, with the main one being Droll & Lock Bird, which makes sense as it is a Spellcaster and is a great hand trap in general. Magical Abductor is good with these new Endymion cards. Dark Magician of Chaos is nice if/when he can find a niche for himself once again. Fairy Tail – Luna is a great card to have reprinted. Spellbook Magician of Prophecy is a great card, along with Spellbook of Secrets, Power, and Wisdom. Summoner Monk is a nice throwback to the fact he debuted in the Spellcaster’s Command deck. Magical Citadel of Endymion and Spell Power Grasp are solid and both make sense in here. Terraforming is never bad. Left Arm Offering will be good when we get a very powerful Spell again. Finally, Pot of Desires is nice to get another budget reprint.

The potential for this deck is most certainly there. As a pure deck, it’s great at putting negations on board, but does require a pretty solid hand and enough ways to make sure you can generate enough Spell Counters for said negations. With that said, I’m sure a good engine could make these guys very useful. Mythical Beasts I feel will be staple with these cards, but there’s other options like Pendulum Magicians and Spellbooks. You just need something to complement adding Spell Counters, but these are very good cards for the theme and worth getting three of this deck beyond just the Droll & Lock Bird and Pot of Desires.