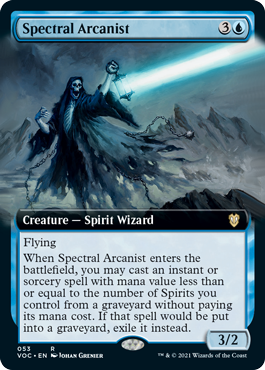 Speaking of Spirit tribal, this guy puts a twist on it that’s all upside . . . for his controller, that is. When getting more Spirits in play means that you’re not just threatening to overrun the opponent, but to set up spell recursion advantage, an opponent who can’t answer both will lose to one. In many cases, the scaling effect tied to the number of Spirits you control means you won’t be able to use him in a pure combo deck, but will instead be choosing things that go well with lots of creatures. But there are a couple of points to consider. For one thing, the only sanctioned tournament formats he’s legal in are Legacy and Vintage, where spells are cheap and one or two Spirits is often enough to get an edge. For another thing, Commander is the exact place where you might be able to pull off a combo that involves both lots of blue creatures and a big spell. Heck, you could even try him with yesterday’s Card of the Day.

As part of the Commander subset, Spectral Arcanist gets no Limited score.

As a general rule of thumb, any spell that lets you recur your other spells has room to be quite powerful, and Spectral Arcanist offers a rather fun twist on it. Four mana gets you a 3/2 flier that lets you, on its own, cast an instant or sorcery spell with mana value 1 or less from any graveyard. No flash means you can’t completely bamboozle people without the right set up…but the mana value rider is already interesting, because it lets you cast things like Living End out of your graveyard. I’m sure this was entirely intentional, but who cares.

Spectral Arcanist is certainly most at home in a Spirit deck, but the fact that you can use its talents on things like Restore Balance means this might have a home as a fallback for Legacy decks hoping to push abuse of those spells to their breaking point. It’s definitely able to put up good results in Spirit decks, as you don’t rely on your opponents for all the good things, but this feels like a piece that’s going to do some damage at some point. And, in the worst-case scenario, it is a 3/2 with flying in two well-supported tribes, so there is that.

Constructed: 3.25 (it’s not going to be a Legacy all-star, but this will probably show up because of its interaction with other broken spells as a sideboard piece)
Casual: 4
Multiplayer: 3.5
Commander: 4.25 (it’s more a Spirit tribal card than a Wizard tribal card, but it can do plenty of damage if you let it)

Excellent design, cool art, and a power utility for spirits.  Now this is a good spirit card!  You can cast an instant or sorcery from ANY graveyard for free (if you control the right number of spirits), wow this card is good!  It gives spirits a leg up and helps them to have their own version of Snapcaster Mage, although not quite as good.  The great thing about this is it is not color specific, you can cast your opponent’s red instant even if you’re running U/W which can quickly turn the game around.  This will pair well with Lingering Souls to get spirits out really fast.  Early game, mid-game, or late game it doesn’t matter when you cast this card ask long as you have enough spirits to play the card that you want you’re good to go!  I can see why WOTC didn’t give this card flash, it would be next level broken!  I just bought this card for my Ranar commander deck and I can’t wait to surprise my opponents with it!

Constructed: 4/5 (in a spirit tribal deck)