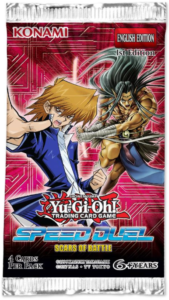 If some new decks weren’t enough, you get a whole new set of cards the same day for this format. Hello Pojo Readers, Crunch$G back here again to break down the newest Speed Dueling set and see what the cards could have to offer in the Speed Dueling format. This time, we have Scars of Battle, and despite having Joey on the front, there are no new skill cards for him, but you do have one of his ace monsters from the show not named Red-Eyes Black Dragon. This set has some pretty good things to offer up for the relatively young Speed Dueling format, so let’s see what the set has in store to add to the format that still doesn’t have that big of a card pool yet. 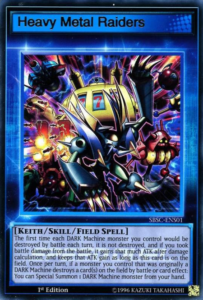 The first of Bandit Keith’s three skills is Heavy Metal Raiders, which is basically the skill version of the TCG/OCG Field Spell counterpart. You start the duel with this face-up in the Field Zone, but your start with one less card in your opening hand. After that, it prevents your DARK Machines from being destroyed by battle each turn and any damage you take involving one of those monsters boosts the ATK of said monster by the damage you took, which can really help keep your monsters on board to later get your bigger monsters out while making said monsters bigger already, especially since they are staying on board as I said. It also lets you Special Summon a DARK Machine from your hand when a card is destroyed by battle or card effect of a DARK Machine that you control, and this will easily help you get your bigger DARK Machines onto the field, which there are some good options for that as well. It’s a neat skill that seems worthwhile if you’re messing with DARK Machine monsters. 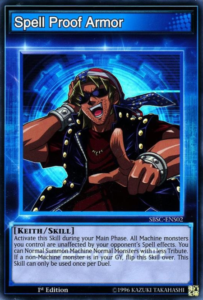 The second of Bandit Keith’s three skills is Spell Proof Armor. It can only be activated during your Main Phase and only once per duel, and if a non-Machine is in your graveyard, then this skill flips back over and you lose its ability. First off, it makes all Machine monsters you control unaffected by the opponent’s Spell effects, and while that would of been more useful on the opponent’s turn probably, it’s nice to counter certain Quick-Play or Continuous Spells the opponent might have that could be hurting you. It also lets you summon Machine Normal Monsters with one less tribute, so it helps get big Machine bodies on board with relative ease and basically makes a lot of these Machine vanillas only need the tributes they should of already required instead of adding one more on them that most of them don’t deserve for their stats. It’s a pretty nice skill for Machine decks that aren’t DARK Machines. 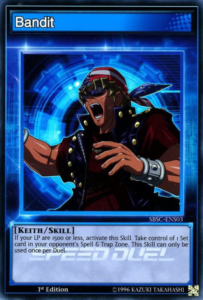 The last skill of Bandit Keith really embodies how he was as a character, and you’ll be able to tell with the name being Bandit. If your life points are 1500 or less, you can flip this skill over and activate it to take an opponent’s set Spell/Trap and put it in your Spell/Trap zone. It’s another one of those skills that are amazing when you consider that once again you cannot chain to skills being activated, and it can really turn the tide of a duel when you’re likely in a losing position since you have to have low LP to even use it, and it’s a once per duel as it should be. This is probably Bandit Keith’s best skill as it is the most generic, and it can be useful if you already took a lot of damage or you play a deck with cards that make you pay LP pretty often.

Servants of the Fallen King 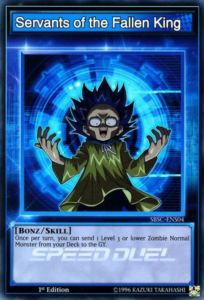 Bonz’s one and only skill in this set really helps his Skull Servant strategy, and that’s Servants of the Fallen King. The skill lets you send any Level 3 or lower Zombie Normal monster from the deck to the graveyard once per turn. The only thing I can imagine this being useful with is Skull Servant to boost your King of the Skull Servants by 1000 ATK and help get closer to the max you could probably achieve with it in Speed Dueling at the current moment. I don’t know any other low level Zombie vanillas you’d want to use with this, but maybe if you got a revival card, you can use this skill to dump something just to revive for a body or a monster to tribute, but mostly this is a Skull Servant support skill, and it’ll help as we get more Skull Servant support in this format. 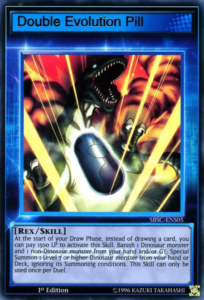 The last new skill is one for Rex, and it’s a skill version of the amazing Double Evolution Pill card the TCG/OCG can play with, but Speed Duel players can’t. You activate this skill at the start of the draw phase and pay 1500 LP to use it, and it is a once per duel skill. After you activate this skill, you banish a Dinosaur and a non-Dinosaur from your hand and/or graveyard to summon a Level 7 or higher Dinosaur from your deck ignoring the summoning conditions. This is really good for getting the big Dinosaurs the format already has out, and it’ll only get better as we get more big Dinosaurs into Speed Dueling. The cost is fine since even as a skill, Double Evolution Pill as a card could be pretty powerful if it didn’t have drawbacks. We got cards like Black Tyranno and Super-Ancient Dinobeast already, and we’ll only get more as time goes on. Great skill for Dinosaur players. 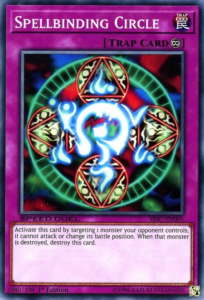 First off, we still got a lot of vanilla monsters with the noteworthy ones being Kabazauls for being the biggest Level 4 Dinosaur vanilla we got in this format, and the DARK Machines like Pendulum Machine, Launcher Spider, and Slot Machine to synergize with the skills in this set. Magical Plant Mandragola is a useful Spell Counter support that synergizes well with the previously released Apprentice Magician, though Spell Power Grasp is better for Spell Counter generation. Spellbinding Circle can make an opponent’s monster basically useless except for being tribute fodder. Command Knight can get pretty big in Warrior decks while it prevents itself from being attacked. Release Restraint will help get Gearfried the Swordmaster out, as that’s the only way it can be summoned. Skeech works with Slushy decks and will help when Treeborn Frog enters this format maybe. Fortress Whale and Fortress Whale’s Oath adds to the very short list of Ritual Monsters and Spells in this format. Jurrac Tyrannus is another good Double Evolution Pill target in this format. Danipon is another good Insect searcher for Insects with 1000 or 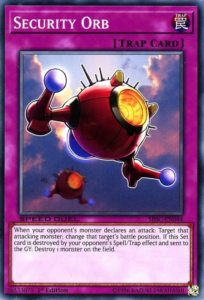 less DEF. Insect Armor with Laser Cannon helps make Insects have more respectable stats with that 700 boost. Blast Sphere can destroy an opponent’s monster that battles it while set and deal some decent damage to them at the same time, while being hard to see coming. 7 Completed can be a decent option to give your Machines better ATK or DEF with that 700 boost to either of your choice. Iron Blacksmith Kotetsu is your best option to get to any decent Equip Spells you might have. Ally of Justice Core Destroyer is great against strong LIGHT monsters like Blue-Eyes White Dragon. Master Craftsman Gamil can be a good option in the hand to discard when your opponent attacks your monster to make sure you take 300 less damage with that 300 ATK boost or maybe let you kill a monster you otherwise wouldn’t have killed while Gamil is immune to Spell/Trap destruction. Eternal Rest is good against heavy Equip decks. Gravity Axe – Grarl is probably one of the best generic Equip cards we’ll get for a while with it boosting ATK by 500 and preventing the opponent from switching their battle positions. The Beginning of the End will probably only be good if they actually add That Grass Looks Greener to this format like they did in Duel Links. Fighting Spirit is another decent Equip to boost a monster by 300 ATK for each of the opponent’s monsters and being able to be destroyed instead if the equipped monster would be destroyed in battle. Break! Draw! is good to equip to strong Machines to give you draw power, even if it is only for 3 turns. Finally, Security Orb is a great option to block an incoming attack by switching a monster to Defense Position and popping a monster if your opponent gets rid of it with a Spell/Trap. 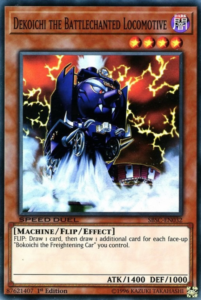 Dark Red Enchanter is a decent tribute monster in Spell Counter decks since it gains 300 ATK per Spell Counter it has while gaining 2 Spell Counters upon Normal Summon and 1 after a Spell activates and resolves while also giving you the option to discard random cards in the opponent’s hand at the cost of 2 Spell Counters. Crystal Seer might be the best Apprentice Magician target since it can take the top 2 cards of your deck and let you immediately take the one you want while the other goes to the bottom of the deck upon being Flipped. Troop Dragon is an ok floater for decks with Tribute Monsters since it floats into other copies when destroyed in battle. Barrel Dragon can work very well with Joey’s It’s My Lucky Day! skill or Bandit Keith’s Heavy Metal Raiders skill for being a DARK Machine that does coin flips to destroy monsters if it gets at least 2 heads out of 3 coin flips. Finally, Dekoichi might be some of the best draw power of the Speed Dueling format since it gains you a draw upon being flipped, more if you play Bokoichi, while being a body that can be tributed or defend you from damage. 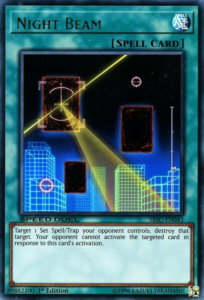 Vampire Lord is a decent tribute monster in this format, not for its 2000 ATK on a Level 5, but being able to send a Monster, Spell, or Trap from your opponent’s deck to the graveyard after it deals battle damage as well as reviving itself if a card effect destroyed it. Gearfried the Swordmaster is easy to summon with Release Restraint and Gearfried the Iron Knight and it destroys monsters just for being equipped, so it’s probably the easiest big monster to get out on the field without a skill and it has a solid effect to back it up. Book of Life is a good Spell for reviving your Zombies while banishing monsters in the opponent’s graveyard at the same time, good for tribute fodder or getting a decent body back. Metalmorph is a great Trap to boost your monster by 300 ATK then by half the ATK of a monster the equipped monster decides to attack into, helps get over big monsters. Mask of Darkness is great for recycling your useful Traps for just a simple Flip. Finally, Night Beam is probably the best Spell/Trap removal in the format since, despite only getting rid of set Spells/Traps and not being a Quick-Play Spell or a Trap, it prevents the targeted card from being able to be activated immediately in response and makes the opponent have to activate something else in order to activate the targeted card.

This set really helps add a lot to the Speed Dueling format. It boosts DARK Machine decks and Dinosaur decks very well while also offering up some great staple cards like Night Beam and Security Orb and also giving slight boosts to previously released cards and skills. There’s a lot to offer in this set for the Speed Dueling format, probably one of the best sets the format has seen so far in my opinion, though there are only three Booster Sets and three Structure Deck sets.