What is Raiders of the North Sea?

Raiders of the North Sea is a Viking Themed Board Game that was funded by KickStarter pledges back in 2015.  It is a Turn-Based, Worker-Placement Strategy game.  Players Assemble a Viking Crew, Collect Provisions and Sail North to plunder gold, iron and livestock.  The game is played with 2-4 players, and whomever impresses the Chieftain the most with their victories is declared the winner.

The board game is co-published by Renegade Studios and Garphill Games.  In 2017 Raiders of the North Seas was nominated for the “Kennerspiel des Jahres”, which is essentially the Academy Awards for Adult Board Games.

The game was designed by Shem Phillips, who also designed Architects of the West Kingdom. Raiders of the North Sea has a 5 Star Rating on Amazon.com, and also has some expansions.  The board game plays in 60-80 minutes.

What is the Raiders of the North Sea Android App? 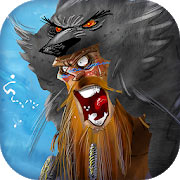 After you have conquered Print Media in a board game, you might as well conquer Digital Media as well!  Dire Wolf Digital has brought Raiders of the North Sea to Digital Life.  And they have brought it to life on Google Play, Apple’s App Store, the Nintendo Switch and Steam!  There is also cross-platform online play!

Digitally, you can play Solo against the Artificial Intelligence (AI), or live against other people online.  Online, you can play “Live” or “Asynchronous”.  Asynchronous game play means that you can take your turn without your opponents being present, and vice-versa.  I tested this with a friend who has Raiders of the North Sea on his Nintendo Switch, and it worked great!

I know the game is available Digitally across many platforms, but this particular review is going to concentrate on the Android version from the Google Play Store.  I will review the Nintendo Switch version in a different post, when I get a chance to borrow my buddy’s Switch.

How does Raiders of the North Sea play? 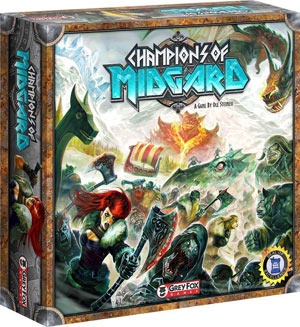 To be honest, I had never played the Raiders of the North Sea (ROTNS) Board Game before I got the App.  So this digital version will be my first foray into the game.

I have that heard ROTNS can be compared to Champions of Midgard, Lords of Waterdeep, Stone Age, Architects of the West Kingdom and other Worker Placement type games.  I own, and have played, many of these other games, so I had a rough idea what to expect from ROTNS going in.

The good thing about Worker Placement type games, is that if you’ve played them before, you sort of know what you have to do.  Play Meeple Workers > Acquire Resources > Take Actions > and Complete Quests … or something along those lines.

In the board game version of Raiders of the North Sea, the game is played across a large playing board.  You need to Assemble a Viking Crew> Collect Provisions > and Sail North to plunder gold, iron and livestock.  And you need to do this better than your opponents.

In the App Version, you have to use your fingers to scroll up and down to see the entire board.  I’d say you are only seeing about 1/4 of the board at a time.  Here’s how the board looks on your phone:

As you can see, you have to do a bit of scrolling to see the entire board.  Your early turns all take place in lower portion of the board, so you aren’t really scrolling much in the early game.

Each player only gets 1 Meeple Worker at the beginning of their turns.  This is different from other Worker Placement games like  Champions of Midgard and Lords of Waterdeep.  In those games you have multiple Meeples/Workers throughout the game.  And everyone in ROTNS is given the same color meeple – 1 black meeple Worker.  In games like Waterdeep and Champions of Midgard, players are assigned different color meeples.  And I’ll explain how this changes the dynamics of game later.  Your Black Worker is shown in the bottom right hand corner of the screen above.

In the beginning of the game you are given 5 Townsfolk Cards, and have to discard 2 of them.  So you have 3 Townsfolk to start the game.  In order to raid and plunder villages to the north, you have to hire Townsfolk by paying them Silver.  Reading the Cards:

Once you pay the Silver, the Townsfolk become part of your crew.  And you get the bonuses they provide, as long as they stay alive!

There are 8 different buildings, with various actions you can take at the bottom of the board:

Each Player get two Actions on their turn

So, the starting player could place their Worker in either the Mill (to gain 1 Provision), Barracks (to hire 1 Crew Member), or Silversmith (to gain 3 Silver). The Armoury and Long House require a Grey or White Workers which become available later in the game. After placing their Worker, and resolving the building’s action, players then pick up a Worker from a different building and resolve its action also.

Once players have hired enough Crew and collected Provisions, they may choose to raid on their turn. To raid a Settlement (Harbour, Outpost, Monastery or Fortress), players need to meet 3 requirements. They must have:

So, in order to raid this Harbour Settlement pictured above, you need 2 Provisions and 2 Crew Members.  You can choose to attack any of the 3 “circled” Settlements in this Harbour.

1. Place your Worker on 1 of the Settlement’s Worker Spots (it will remain there for the rest of the game).
2. Pay required Provisions and Gold to the supply (no gold needed in this example)
3. Roll the required dice and add up their total Military Strength to determine any Victory Points gained (explained below)
4. Receive additional Victory Points from Hired Crew.
5. Pick up their new Worker in the Settlement and the Plunder, adding it to their supply.
6. Resolve any Valkyrie actions (explained below)

After picking up your new Worker, along with your Plunder and resolving any Valkyrie actions, your turn is over. Play then continues with the next player, in a clockwise fashion. As before, the current player can either Work or Raid.

In Norse Mythology, A Valkyrie is a female figure who chooses those who may die in battle and those who may live. Some of the slain are taken to Valhalla (ruled by Odin), to protect Odin and prepare for Ragnarok.  Thor Ragnarok anyone??

Some raids may also include 1 or more Valkyrie tokens (Black Skull Tokens) with the Plunder. In ROTNS, Valkyries work this way:

1. For each Valkyrie token taken, players must lose (discard) 1 hired Crew Member of their choice. Some Hired Crew members allow players additional actions if killed during a raid. These actions are resolved immediately and automatically in the game.
2. One of your scoring tokens will be moved up the Valkyrie Players Track for Bonus Scoring

There are 3 different ways to score Victory Points during a raid.  I’m not going to cover this in detail, but here is a general overview

1. Military Strength – Bonus Dice are not rolled for Harbors, but rolled elsewhere to give you more military strength
2. Hired Crew – Some Crew give Raiding Bonuses
3. Plunder and Valkyrie – Worth Points at the End of the game

Here a simple example of attacking a Fortress:

To Attack this fortress above you need:

If you have the re, you can take the plunder from the Settlement you attacked.  You also get to roll bonus dice to attack for Victory Points.  Let’s say your Military Strength is 18.  And you a 5 and a 3 on your dice.  You add 8 to your military strength, and now it is 26.  Attacking this Fortress with a Military Strength of 26 awards you 8 Victory Points in addition to the plunder!  And, if you attacked the settlement with the settlement with the Valkyrie Token, you will sacrifice a Crew Member to Valhalla!

End of the Game

There are 3 ways the game can end:

1. There is only 1 set of Plunder left in the Fortresses (1 of the 6 Fortress raids remains).
2. The Offering Draw Pile has been emptied.
3. There are no Valkyrie left on the board.

End of the Game Scoring

Final Scoring is tabulated by adding additional Victory Points for:

Does the Digital Version of Raiders of the North Sea Offer Anything New?

Yes!  Here are some things new in the Digital Version:

Tutorials – The tutorials aren’t that great for completely new players though.  If you are new to this game, I think you should watch some How to Play videos on YouTube before your first Tutorial.

Campaign Mode – There is a 10 game campaign mode. Each campaign has its own set Rules, which are completely different from the normal rules.  By Playing the campaign you can improve the look of your Longboat via Challenges. 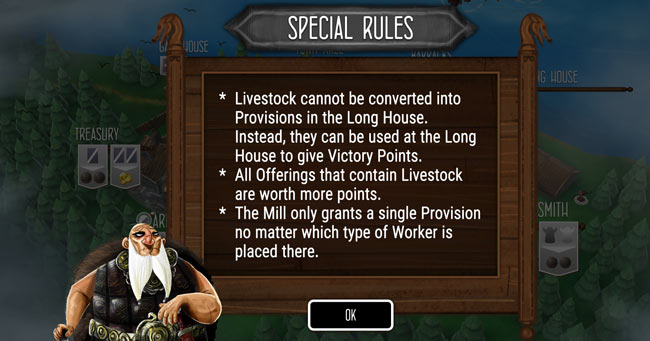 Vs. AI – You can duel against the Artificial Intelligence, and play Solo.  This works well.  Although, I’ve heard that some people think the AI is too easy to beat.

Online Play – You can go Online and duel Cross Platform Against Other Players.  You can set the number of Human Players up to 4.  You can set up to 2 AI players.  You can set the game to “Live” or “Casual”.  And you can Password Protect Games if you want.  The game also allows you to add friend codes, and easily battle with friends online.  Casual play is “Asynchronous”, which is what we discussed earlier.  You and your friends play a slow casual game, and Android will notify you when it’s your turn!

I think this a fantastic digital game.  I love Worker Placement Games.  I own physical copies of Champions of Midgard, Automania, Lords of Waterdeep, and Agricola.  And this game ranks right up there with those games.  The game play is elegant, the artwork is great, and (for the most part) it works well on your android device!

Raiders of the North Sea retails for $9.99 on the Google Play store.  And I think this a good deal.  There are no microtransactions.  You get the complete game for ten bucks.  Maybe there will be microtransactions in the future to buy some of the expansions.  But, the expansions are not needed to enjoy this game.

If you can convince a friend (or two, or three) to also purchase this game, then you can have some great turn-based fun across different devices and platforms.  If you’ve always wanted to play this game Solo, then this is for you as well.

This digital version of Raiders of the North Sea has me looking for a Physical Copy of the game to to add to my collection as well!