I was 11.  Some of my friends in school had shown me their cards. I was really impressed at the time, even if I have the misfortune of now knowing I was so impressed by effect-less monsters with weak stats. I saw a couple of others with them but never thought too much of it. Eventually, I would come to playing the game and loving it. Why? Probably because it was ubiquitous and I wasn’t hard to influence at the time, but years later I found myself loving it (it was hard to stop). 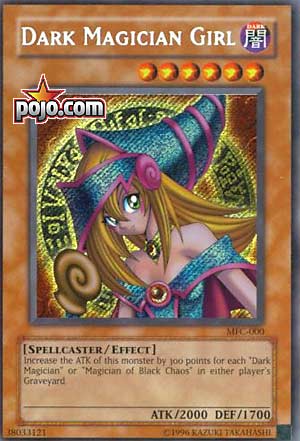 When my best friend came over to play (at that age, it was “play” – not hang out), he showed me his cards.  At this point, it was official.  Everyone dueled but me.  I decided to go to the supermarket with my allowance (YGO was so mainstream at the time, they sold it well outside of comic book stores) and spend $11 on Starter Deck Yugi. Tough decision at the time, but for that age it was a big one. Yugi was the good guy and Kaiba was the anti-hero. I realized that having Dark Magician (2500-ATK) as my boss monster, I was at a disadvantage to the Blue-Eyes White Dragon (3000-ATK), but I figured the other cards in the Yugi deck would be good enough to make up the difference. I surprised him next week by dueling him, but I lost horribly. I was watching the anime to “practice my dueling skills” so I could finally learn to beat him! I bought 3 packs of Pharoah’s Servant to help boost up my deck. I got a super rare Fairy Meteor Crush out of it, and not much else. Needless to say, I got my butt kicked again.

The tides soon turned as I got lot of packs on my birthday and I really buffed up my deck. And I also figured out one more thing. We were playing incorrectly. For Level 5 and higher monsters we had to offer sacrifices, and we didn’t. He had lots of Level 8 monsters in his deck and I only had the Dark Magician and a few others. So, I helped fixed his deck to a more stable beatdown with a leaner deck count (from 50-something to 40). I surpassed my “mentor” easily at that point, but a month after Labyrinth of Nightmare came out in 2003, he quit playing after losing interest.

Isn’t it ironic that every single person I knew from my school who was trying to get me into the craze eventually stopped playing, but I still am hooked?

In the Legacy of Darkness (the next set) , I met a new friend who re-sparked my interest but after he moved, I quit and sold most of my collection (aside from like 50 cards I stumbled upon in my garage later on).  I sat out Pharaonic Guardian and Magician’s Force.

I moved to a new town by the time Dark Crisis came out) and there happened to be 3 neighbors my age who happened to play, so I started up all over again and rebuilt my collection. That’s where memories, a lot of good and some quite bad were made. I remembered having cards stolen, being ripped off in trades (trading my Black Luster Soldier – Envoy for a bunch of commons) and losing my entire deck once. I built a deck from scratch after losing it, and kept using it for a few months.

One of the happiest days of my life was months later when I found the original deck I had lost in my pant’s pocket (of pants that were thankfully not put in the laundry wash). The original deck was stall-burn and the new one was aggro. I had the luxury of mixing the best assets of both combined, but I digress.

I would play it obsessively until 2008 (for about 4 years), moving from comic book store to comic book store. It’s a tough business and many of them don’t stay open for a long time. Even if I didn’t think much of them at the time, I still miss all of the old ones I went to that went out of business. Cherish them; take pictures of them. You’ll miss them. But anyway, in 2008, I was age 16 and got a summer-long job in construction. When I started in July, I was working to save enough money to get several boxes of Light of Destruction so I could have all of those holo-foil Lightsworns, feel like a king with an expensive collection and win lots of games.

But, by the end of that job in early September, I had a different change of plans. I quit after being jaded, as well as caring too much what people thought of me. I did come back in 2011, but today I don’t play nearly as often as I used to. Today, I just have fun writing about it. And there it is, full circle.