I don’t have much to add on this old article about cards becoming more cartoony and less scary over the years.  I just want to say that I love the title: 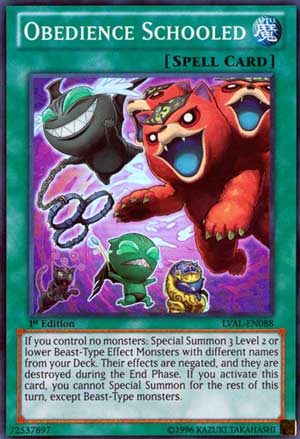 Pojo’s Card of the Day for “Obedience Schooled” inspired me to write this article. Particularly, the reviewer Christian Moss talks about the card’s art work being completely different than that of cards in the old classic days (2002). And he’s totally right. A card like that with cartoony bears and such would have never made the cut back in the old days. To put it briefly, the game changed from scary to cute.

Look at some of the cards from the Starter Deck Yugi and Starter Deck Kaiba: D. Human , Ryu-Kishin, Master & Expert , Mysterious Puppeteer , Dark Titan of Terror , Doma the Angel of Silence and the like. Shortly after, there were eerie cards like Sangan, Witch of the Black Forest, Invitation to a Dark Sleep and Mask of the Accused.  Let’s even look at the iconic card Dark Magician.  He started as the servant to the hero Yugi.  He practices dark “forbidden” magic, and usually in fiction dark means evil, making me confused why the light-based card Blue-Eyes White Dragon was not the hero.

In the first few booster sets, YGO tried to go for literal monsters: scary creatures in scary environments. They were grounded in tropes from horror, old religions and such. Now, they are often silly and derived from just about anything.  Today, we still call monsters monsters, but that’s just nominal. I wouldn’t call Don Zaloog, Outstanding Dog Marron or Noble Knight Peredur “monsters”.

We’ve gone from gargoyles to anthropomorphic airplanes and the change isn’t a coincidence.

There’s a divide between old classic cards (2002-2004) and more modern cards (2005- onward). And yes, there have been exceptions, but in context, of course.  Toon monsters from the 3rd booster set Magic Ruler were cartoony also, but that’s exactly whats disturbing about them. At the time, they were eerie because they looked totally alien to what we had expected. They didn’t really belong. If they came about today, they would.

Why Cards Have Become More Cartoony

First, Konami toned down the violence of the cards to make it more appealing to an international audience of different cultures, as well as appeal to 12 year old children (not just older teenagers and younger adults).

Second, while darker themes and tropes worked well in manga, they didn’t necessarily translate well into cartoons.  Cartoons weren’t able to have realistic gritty medieval visuals at the time, so adding more colors to the palette made sense.

Third, the game needed to be spiced up. There are about 50 booster sets.  After 10 or so sets in, having the same types of cards gets old.  I couldn’t imagine them stretching the “medieval castle with monsters, knights and torture chambers inside” concept for 3000 more cards, anyway.

However, I didn’t think 10 years later I would be dueling with Madolche deck-types, imagining a mansion maids defending my life points, lobbing baked good at dragons and warriors.

And that’s what makes this game so great. You get lots of choice and variety. You can use scary monsters like Helpoemer in your deck and cute little creatures like Drillroid in there too. Or, something in between like Marauding Captain.

Don’t get me wrong; I have a fondness for the old nostalgic art.  But the sheer scope of what this game could encompass was only made clear after the often-corny YGO GX challenged us to “get our game on”.

Overall, the change was good.  What if the Beatles had only made songs like “Twist and Shout” for the rest of their career instead of experimenting?

And also, the older cards are even more appreciated because they’re a relic of that time rather than something that was stretched on and on for many years.

When it comes to theme and style, Yu-Gi-Oh has made a 180 degree turn in the other direction. It went from dark and scary to colorful and cutsey. It strayed away from its roots, but that is exactly what enabled it to become what it is today.