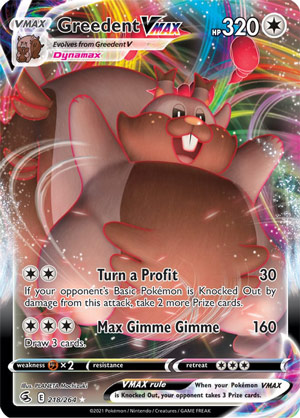 Greedent VMAX (SW – Fusion Strike 218/264, 272/264) is our next runner-up, the card that would have taken 17th-Place if we’d done a big enough countdown.  Greedent VMAX doesn’t really standout in terms of its attributes.  It is a Pokémon VMAX, so it has to worry about giving up three Prizes when KO’d, being excluded from certain beneficial effects, anti-VMAX effects, anti-Pokémon V effects, and anti-Rule Box Pokémon effects.  Except it doesn’t really have to worry too much about that last one, since it has no Ability (and thus doesn’t sweat Path to the Peak).  VMAX is also the card’s Stage of Evolution.  Essentially, they’re Stage 1 Pokémon that don’t actually count as Stage 1 Pokémon with respect to TCG effects or mechanics.  They can access their own support and counters, as well as general Evolution support and counters.  I don’t recall the VMAX-specific support doing all that well (contrary to my own expectations for those cards), but Pokémon V-specific support like Melony has done alright.

Greedent VMAX is a Colorless Pokémon; while this means no dealing with Resistance, it also means no exploiting Weakness.  There are some perks to being Colorless, however: Dunsparce (SW – Fusion Strike 207/264) and Powerful [C] Energy.  In Expanded, there are some more support options, as well as counters.  It is hard to say how relevant they will prove in the modern Expanded metagame.  Greedent VMAX enjoys 320 HP; this can be OHKO’d, but there’s only two printed HP scores that are better (330 and 340).  It is typical for a Pokémon VMAX, but is still a good thing.  The [F] Weakness is scary; Rapid Strike Urshifu VMAX is most definitely still a “thing”.  No Resistance is a missed opportunity, but also quite normal.  The Retreat Cost of [CCC] is a pain to pay most of the time.  Use alternatives to retreating and/or prepare for Greedent VMAX to try and tank.  In Expanded, you will gain access to a few bits of support, like Heavy Ball, from it.

Greedent VMAX knows two attacks.  For [CC] “Turn a Profit” does 30 damage.  That would be awful except for the attack’s effect: when used to KO an opponent’s Basic Pokémon, you get to take two extra Prizes!  [CCC] pays for the second attack, “Max Gimme Gimme”.  This does 160 damage plus lets you draw three cards.  This is also a good attack; for three Energy of any type, 160 damage is still very good, and drawing three more cards can help with managing complex combos.  Which is what you’ll need to capitalize on Turn a Profit.  30 damage would normally mean you’d have to almost OHKO your opponent’s Basic Pokémon, then finish it off next turn while hoping your opponent couldn’t heal or bounce that Pokémon… or sabotage your Greedent VMAX.  If that still sounds good, remember that just using Max Gimme Gimme has a good chance of 2HKOing opposing Pokémon VMAX under the same circumstances.  You’re one Prize ahead if you manage to use Turn a Profit to 2HKO an opponent’s Basic Pokémon V, and just breaking even if you use it to 2HKO a single Prize Pokémon.  You also need to consider Prize counts; taking more than six Prizes in a game is about bragging rights, not real progress.

The most obvious partner for Greedent VMAX, besides the above Dunsparse and (maybe) Powerful [C] Energy is probably Inteleon (SW – Chilling Reign 043/198; SW – Black Star Promos SWSH113; SW – Evolving Skies 227/202).  Well, that and Boss’s Orders (maybe Cross Switcher?), and Echoing Horn.  Find your opponent’s least needed Basic in their discard pile, revive it, force it Active after Inteleon’s “Quick Shooting” has brought it into Turn a Profit’s range and… well… profit.  Perhaps pack some disruption in case your opponent is only running stuff too large for either attack to take on easily.  Thanks to Max Gimme Gimme, you can shift to more of a control/beatdown style.  You’ll need some Energy acceleration… maybe Melony?  If you’re wondering why I just don’t go with a decklist, that’s because I don’t have any.  Which means it hasn’t won any recent events, or at least, none that I could find over at Limitless.

The Expanded Format does its usual thing; more counters awhat nd competition versus more combos.  I think this is actually a net positive this time, though not enough to bump Greedent VMAX’s score up a point.  Double Colorless Energy, Triple Acceleration Energy, Max Potion, Muscle Band, etc. should help Greedent VMAX out more than the negatives hurt it.  In fact, its biggest problem is something that is Standard legal: Medicham V.  Not simply because it is a [F] type attacker, but because the kind of combos that improve Turn a Profit usually also help setup for Medicham V’s “Yoga Loop”.  Greedent VMAX didn’t make my list for SW – Fusion Strike, but I considered it after other sources showed me it might be more than just Johnny Bait.

Editor’s Note: Vince had Greedent VMAX as his 11th-Place pick.