Home Featured Articles Down the River of Spirits: A Gameplay-Free Review of Champions of Kamigawa

I subscribe to various newsletters from local game stores, and as you might imagine, some of them make a good living selling Magic. There are many fewer tournament centers in Melbourne than there used to be, but there seem to be more places to buy Magic cards. For a while, you could even get them at Target, though I think they weren’t profitable and so haven’t been carried for some time. As such, nowadays you’d probably have to find a dedicated game store, but there’s about two per mall (counting EB Games) and a few really amazing ones scattered on the streets. Seriously, if you’re ever in my town, go and walk on the streets. It’s too much fun and too much good.

But that’s a topic for a different time. As such stores often do, the one that emailed me wanted me to pre-order sealed product, specifically for Kamigawa Neon Dynasty. They opened their email by proclaiming that the original Kamigawa block brought “some of the most overpowered cards in Magic’s history”. Now, you might not be used to thinking of Kamigawa in these terms. There’s a school of thought that it was the cooling-off block from the insanity of Mirrodin, which saw a period when every Standard deck ran four Skullclamps and ended with six commons banned in Standard. When you look at some of the Kamigawa block’s cards, this assessment can seem apparent, even self-evident. 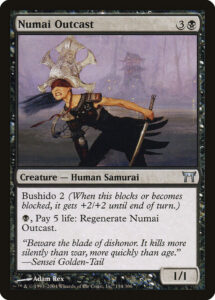 Perhaps there is an element of truth to this. And yet, the block also contained Gifts Ungiven, long restricted in Vintage; Sensei’s Divining Top, which was part of two of the most unfair decks of all time, and which went on to break Legacy tournaments because of its time-wasting nature; Forbidden Orchard, which nearly single-handedly made Vintage’s Oath of Druids deck work; Kiki-Jiki, who was doing the Twin combo long before we called it by that name; Pithing Needle, one of the most versatile answer cards ever printed; Desperate Ritual, which helped the Time Spiral-fuelled red-based storm decks take off in multiple formats; and Umezawa’s Jitte, which has always been banned in Modern and would have been banned in Standard if they hadn’t feared the PR repercussions. There might even be other things I couldn’t think of by the time I got this article done.

Why are we talking about this? Isn’t this supposed to be the gameplay-free review? We’re talking about this because I suspect that just as your gameplay memories of Kamigawa (if you experienced it) or the stories you’ve heard about it (if you didn’t) don’t reflect the block’s full impact, your non-gameplay memories don’t reflect the block’s full character.

Memory is a strange thing. We tend to think of it as working the way we think a video camera works, where everything that happens is recorded exactly as it happened and with every relevant detail. In reality, our memories are subjective, mutable, and selective (more like the way a video camera actually works). Your interpretation of what someone else said to you on a particular day is determined not solely by their words and tone, but by how you feel about them, the mood you were in on that particular day, and/or your emotive response to the topic of conversation. And over time, your mood, your opinion of the person, and/or your feelings about the topic will change, and so might your recollection of what they said to you. Our brains are also not designed to function while storing every single detail, because most details are minor and not relevant to what we actually need to do – what the person said was probably much more important to you than the color of their shoes.

And all of that’s before you get into the problems raised by the fact (noted in proverbs starting from ancient times) that everyone is the hero of their own story and tends to edit their memories to protect themselves and their self-worth; by the way the act of remembering or forgetting has emotional, personal, and social dimensions beyond the act itself; and by the concept of arousal theory, which holds that the events which (to use a non-scientific term) stir people up the most are more easily stored as memories.

Arousal theory is a great place for us to return to Champions of Kamigawa, because whatever else the set did or did not do, it certainly aroused feelings. To many, the problem was strongly influenced by the plane’s “weirdness”. There is something to this, but not necessarily what the simple statement implies, because Magic has always gone to places beyond the grounding tropes of Tolkien / Dungeons and Dragons fantasy.

The very first expansion was a Magic-ized version of the Thousand and One Nights; the second was science fantasy with (what we’d now call) mechs and robots. (You may have noted that the advertising for the upcoming Brothers War expansion – a revisit of Antiquities – uses those exact words.) That second expansion also introduced Phyrexia, the long-running faction inspired by H.R. Giger’s biomech horror, and Weatherlight began a years-long story headlined by a crew of (to oversimplify) sky pirates. Magic has always broken the mold; what was different about Kamigawa? 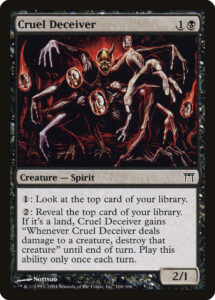 Champions of Kamigawa‘s “weirdness” is not of this kind; it’s an incomplete and inaccurate way of describing the fact that it comes from a different cultural milieu than most Magic sets. Look at its famous legendary dragons and compare them to those in other Magic sets. Look at its Spirit tribal creatures and compare them to the creatures that carry that type in Ravnica: City of Guilds or Innistrad. They’re so different because they’re designed using baseline assumptions  from Japanese folklore rather than English-language folklore – and to people who ran across them with no warning, if you like, they may have seemed confronting.

Now, none of this is automatically a problem. For one thing, there are plenty of people who like anime and manga, and those certainly come from a very different cultural context than their English-language counterparts. And for another thing, in an infinite multiverse you would expect every possible thing to exist, and you would also expect (almost) every plane to look different. But a change in perspective generally implies motion; and motion must overcome inertia. And inertia is a powerful thing – those of you who took physics will recall that overcoming it always takes force.

Although Magic’s playerbase has always had a degree of diversity, the game is fundamentally derived from English-language fantasy – there is, of course, nothing that says that other cultural inspirations can’t work, but Wizards of the Coast hadn’t quite figured out the best way to do so when they released Champions of Kamigawa. The set doesn’t seem to be quite sure what it’s doing. The anime/manga influence is definitely there, but the set doesn’t really lean into it. The translation of Japanese folklore and mythology into card form is strong and well-executed, but it also hews closely to Magic tropes designed for other planes – most existing creature types are in the “right” colors, for example. Compare Khans of Tarkir, which has a pan-Asiatic setting, but feels like a Conan story set in the eastern regions of Hyboria. Champions of Kamigawa feels like a translation of a story about something specific or unique to Japan. 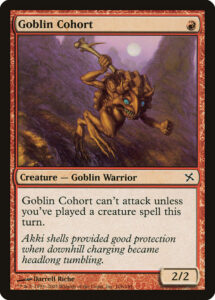 As a result, Champions of Kamigawa exposes the subjectivity of reaction and memory much more effectively than most sets do. If you’re interested in maximum multiversal variety, or in Japanese mythology specifically, you probably like it and you may well love it. If not, you probably don’t see the point to it, or even dislike it. And there’s one last problem I’d like to address, while we’re all here. Some people’s perception of Kamigawa’s flavor and concepts is colored by their experiences with the gameplay (whether they found it too strong or too weak).

I can’t overstate how much of a mistake this is. There’s a reason I’ve been doing gameplay-free reviews for the past four years – although gameplay can be influenced by flavor, in the form of top-down design, it doesn’t have to go the other way. Since each card exists as an individual piece of art (not just the literal art, but also the name, flavor, concept, etc), you don’t have to play the game at all to have some appreciation for it. Gameplay is ephemeral; art is eternal. You don’t have to appreciate every single part of a Magic set, but you may find that your enthusiasm for the game lasts longer if you do. I have yet to see a single Magic set that I found to be completely without merit. I doubt Kamigawa Neon Dynasty will be the one to break that streak.