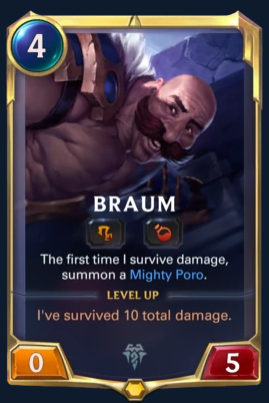 He used to be underpowered.  Then got a big buff, then a nerf and now he’s in between. Braum/Anivia decks were meta 2 patches ago.  Braum isn’t meta now, but not bad either.

Level Up effect: +1/1 helps him.  He could potentially generate an unlimited amount of Poro’s, but he usually only lives only enough to summon 1 or 2.  A free 3/3 Poro body is nice, but not the scariest late-game threat either.

Take Heart (the spell that comes with him): Potentially very good since its permanent, but situational.  Worst case, it can’t be activated when you need it.