Fusion Summon 1 Fusion Monster from your Extra Deck, using monsters from your hand or field as material, including a Dragon monster. You can also banish monsters from your GY as material, if you use “Fallen of Albaz” as Fusion Material from your hand, field, or by banishing itself from your GY. During the End Phase, if this card is in the GY because it was sent there to activate the effect of “Fallen of Albaz” this turn: You can Set this card. You can only use each effect of “Branded in White” once per turn.

“Branded” Week starts up on Pojo, the first card connected with more Albaz support that we’re reviewing is Branded in White.

Normal Spell that is another form of Poly, but gains more abilities if used with Albaz. Opening up the grave as an option for Fusion Summons increases the ease to summon a Fusion Monster while not taking away from what you’ve got on the field. Reset it if you use it in conjunction with Fallen of Albaz’s effect, and in an Albaz strategy you’ll be resetting this card more than once. The best part of this card I think is the lack of it banishing itself after activating its reset effect. Albaz’s effect is like this effect and then you get your reset, breaking even while still getting your Fusion Summon you’d likely have used Branded in White on. Four Fusion Monsters Albaz is a part of, and any of them could be a good choice depending on your situation, though Sprind the Irondash Dragon has good spot removal upon moving to a different column. Albion the Blackclad Dragon can get Albaz into the grave and swap itself for a draw, setting up Branded in White to banish the materials for a Fusion Summon.

While usable in any deck that does a decent amount of Fusion Summoning, it belongs best in an Albaz strategy to get the most out of itself.

Time to get back to Lightning Overdrive to finish things off with the lore, starting with Branded week. We only got one monster in the Branded archetype, so expect the week to be majority Spells and Traps, started with Branded in White.

Branded in White is a Normal Spell that lets you Fusion Summon any Fusion from your Extra Deck by using monsters from your hand or field as material, including a Dragon monster. You can also banish monsters frorm the grave if you use Fallen of Albaz as Fusion Material. So it’s a Poly for Dragons, but you’re mainly using this with Fallen of Albaz, which is fine. Another way to get to the Fusions, especially with a Miracle Fusion effect, is good to have. It’ll be nice as well once we get Blackland Dragon Albion as another name to become Albaz, but the original is good enough for now and highly accessible. During the End Phase, if this is in the graveyard because it was sent there this turn via Fallen of Albaz, you can set this card back to the field. Nice recovery effect to help make up for Albaz’s discard at the very least. If you get access to any of your Albaz-like monsters, then this should be easy to resolve. Each effect is a hard once per turn, which is fine. It’s not much of an inspiring card, nothing is unique here. Having “Fusion” actually be in the name would of been nice, but Branded cards are accessible enough. This is a fine card for Albaz Decks.

Art: 4.5/5 The lore artwork is pretty sick, and this is the same, despite looking simple on paper.

Branded in White is a Normal Magic card, and another to do a Fusion Summon without needing a Polymerization specific card.  While not specifically Theme specific, you do benefit additionally from using Fallen of Albaz (remember him?) with all these cards.  You get to Fusion Summon using Monsters from your Hand or Field, one of which must be a Dragon.  Graveyard can also be used for Fusion Material so long as you use FoA from anywhere as material as well.  This card is being very specific while still keeping things relatively open ended for the user as well.  Which is nice, but a little more complicated than I would think is necessary.  Finally (you’ll see this a LOT this week also) where this card can cycle itself and Set back to the Field if it was used as part of the Effect of FoA.  Which does help and will get you the most out of the card.  How good is this?  Again, I’m a little put off by the specific (FoA) required, the semi-specific (any Dragon) and then the openness of whatever else.  Given the later, and how much these cards and combos can rely on FoA, it’s probably going to be how often you have him in relation to what you have/need/want.

Art:  2/5  There’s nothing branded here white at all, and while I do enjoy the picture, neither the pic nor the name seem to make much sense. 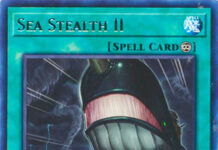 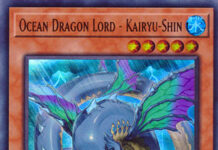 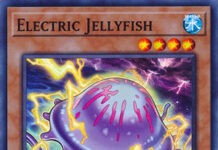