Home Pokémon Pokemon News Back to Campus Memo from the 3DS-Top of Angrychu – Pokemon Toy...

Angrychu sitting in for Loretta today, which is the nickname for one of the Pocket Monsters in the Pokémon Shuffle mobile game; Loretta was busy in this week’s Mega Banette competition and we left her Friday in the top 1%, then currently 14 out of 8000+ US 3DS players thanks to the wonderful coaching tips of the Reddit community. Unofficial Team Komala has some serious business to attend; we’ll start with what’s hot this week.

Is there no fun in Funko? Target apparently pulled a “Disney Store” with the newly released first Pop! vinyl figure representing the second largest video game franchise in the entire world. Got Pikachu? Don’t ask Pojo’s old card scan contributor Omahanime, or the vast majority of hardcore Pokémon fans in the US. The sadly under-produced figure was apparently scooped up by scalpers en masse judging by the online commentary and e-Bay listings, including many in my area, which has at least a dozen Targets in the general metro area. With the demise of Toys ‘R’ Us, the pressure is on big box stores to take up the slack and it’s not off to the best of starts. One online commentator was spot-on: “How do you explain scalpers to a five-year-old?”  I spoke with some random Target employees and one said that apparently a Target store accidentally (?) put out the figures early (release was noted as August 1 online, coinciding with a week of seasonal shelf resets, which in my area is slowly wrapping up with lots of great new toys finally out!). Chaos ensued when customers (who can say if any/most would have been scalpers—but looking at e-Bay, hmm) demanded the figures after showing proof that others online had them in hand. I’d haunted the Target toy area for the week around the date, always coming up short. But I did discover that Wicked Cool had taken over the Pokémon master license and that totes explains why I wasn’t finding Tomy Toy Fair 2018 photos for Pokémon, LOL. Even Pojo hadn’t heard about the license changeover. I purchased a cute Wicked Cool Pichu slap bracelet (Pikachu, Alolan Vulpix, Espeon and Umbreon were also available), noticed new figures (many similar to Tomy, which is great, as those were always nice figures!) and new plush (fabric similar to Pokémon Center plush, very soft and velvety; also little carry purse plush, Togepi, Pikachu, Piplup and Eevee!), but no Pop! I was in full Angrychu Super Bolt mode by the end of the week, but I did a little driving, took a little chance. AND. Finally. I’ve photographed the elusive Pikachu Pop! figure next to my Jakks Cheebees (chibi!) copyright 2009 figure. I guess I never expected the scalper frenzy due to the existence of the relatively similar big-headed vinyl, but to be fair, that’s from nine years ago. I truly hope Funko and Target will make this right and get more of these Target exclusive Pop! figures onto shelves so real fans and kids can enjoy them for the upcoming holiday. Since it’s back to campus soon, here’s Lesson #1: don’t feed the scalpers. Write to Target, write to Funko. There really is no reason why something as huge as Pikachu should be this limited, basically disappointing a lot of 20 year+ fans and kids; at least produce another Pikachu Pop! that isn’t limited edition—and soon! And yeah, it was a lot of work to track down that Pop!, work for which busy parents really do not have time!

During my shopping trip Friday, I also spoke with a GameStop employee; he disliked scalpers as much as anyone with whom I’ve spoken, but he also mentioned that their corporate entity was having a hard time securing [Pokémon] exclusives recently. With Toys ‘R’ Us gone, we’re left to wonder who will be doing the special promo card events and whether there will be special exclusives for the upcoming holiday season—and whether scalpers will be spoiling the holiday season if quantities are not properly estimated by manufacturers.

I thought about posting a back-to-school blog when I found this adorable Unofficial Team Komala approved backpack at Wal-Mart back in… JUNE. That’s right, June. Since when has back-to-school shopping season started that early?! It was just too painful to wrap my Angrychu head around that, so instead, Komala wrapped its arms around this log on this super-kawaii kids’ $5 backpack. It’s a light duty backpack, good for little fans and could easily hold a bit of gaming swag for older players. 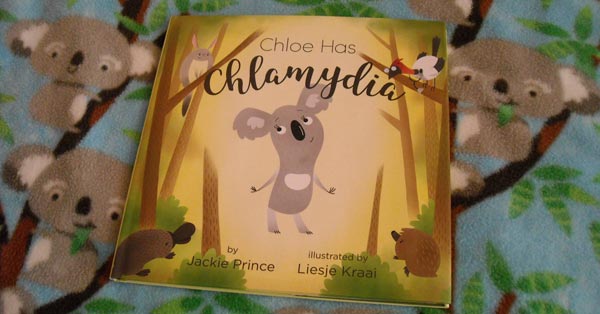 September is Save The Koala Month in Australia; please visit www.savethekoala.com , the Australian Koala Foundation’s website, to find out how you can help Komala’s wild cousins, maybe visit their online gift shop to get some cool koala school/desk supplies and support koala conservation. When I was web-searching koala news recently, as I do daily, I stumbled across a book that parents who understand the realities of back-to-campus and truly care for their college students’ welfare might consider tucking into their adult kids’ backpacks before heading back to campus. With five-star reviews on Amazon, we have a book for young/adults addressing a difficult topic: Chloe Has Chlamydia, by Jackie Prince, the first book in a new series that “tackles grown-up issues with humor, empathy, and honesty.” The book encourages safe behavior and provides links to resources for readers—not to mention the artwork by Liesje Kraai is beyond cute. It also mentions that koalas in the wild suffer from the same issues (the infection is endemic to the population and is often triggered by stress such as habitat loss); although koalas suffer from a different strain of this infection, I’ve read that research to help koalas has also obtained valuable information to help human medical research. The only way this book could be better is if they had thought to include the URL for the AKF, but that’s OK, ‘cause I’ve noted it in my blog here! I purchased my copy via Barnes & Noble. 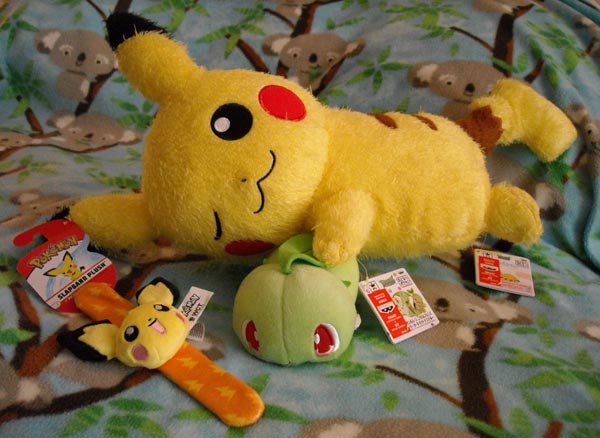 Summer is convention season, so I’ll wrap up by showing a couple of items I found at The Anime Palace when I visited their warehouse last month (they are online or at anime conventions throughout the US—I should mention to Pojo that Loretta gave Wade of Anime Palace a copy of the 20th Anniversary book when she visited, to which Wade responded that was not one of Loretta’s best photos, “your hair was a mess!” PI!!!!!!!!!!!!!!!!!!!!!!!!!!!!!!!!!!!). Although Anime Palace is moving toward offering its own plush designs, I was able to obtain an adorable sleepy Pikachu Banpresto plush (that looks a lot like the sleepy Pikachu in one of my Nintendo 3DS theme downloads!) and a small stackable Banpresto Chikorita. I’ve included the Wicked Cool Pichu slap band in the photo, purchased at Target. While the Funko Pop! situation may be a bit daunting, there are still plenty of other ways to obtain Pokémon products