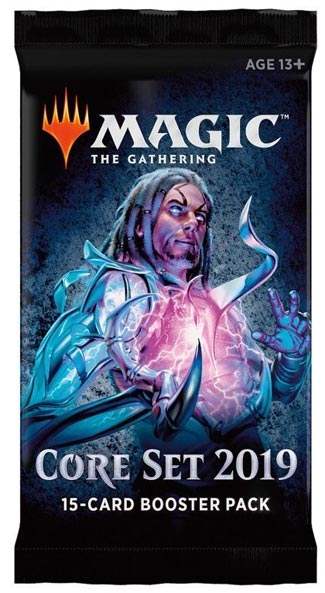 I’m so happy core sets are back.

For the past couple of years, a significant number of tournament players have taken to the internet to give their opinion that Standard was unfair, unfun, and generally unbalanced. That’s not hard to believe. Standard was missing its core, and nothing can stand up without a core, a center of gravity.

From the point of view of someone like me who doesn’t play in tournaments, core sets offer a more grounded experience, if you like; something closer to the core of Magic without too much in the way of gimmicks, or strange new mechanics and the pressure of being able or unable to fit them with existing cards. I can open a booster of almost any core set, especially since M10, and almost always find something interesting.

I sometimes think Wizards of the Coast doesn’t go far enough with core sets and the core experience. I don’t give much thought to the calls for Magic to distribute itself like a living card game when they are made for budget reasons – not least since economists have proven in numerous studies that people do not value things that they didn’t have to expend effort in acquiring. We literally throw water down the drain because it seems plentiful, yet absinthe is both much worse for you and much more expensive. Still, it is worth thinking about the fact that games like Ticket to Ride and Settlers of Catan have sets which represent a complete stand-alone experience and are marketed as such.

Magic is a trading card game and has an inherently different distribution model. That is mainly a matter of tradition and – let’s be completely clear here – business goals. It’s probably a safe bet that about half of M19’s cards won’t be in M20, which raises questions about what exactly is core about a core set. Would Magic be harmed so greatly by a core set that didn’t actually change its contents and which offered a core experience, in limited and/or constructed? This raises the question about how long it should stay in print before it risks becoming as seemingly valueless as tap water, but as far as I’m aware, it’s a conversation that has never been undertaken seriously.

I suppose you can already play one form of Magic for ever, by seeing a box of Ixalan boosters as an investment, by making a cube, or by following the example of people who play Kamigawa Block Pauper Tiny Leaders. It would be nice if you didn’t sometimes feel like it was an uphill battle. But this is a different problem from the applications of M19, and there are a couple of elements of this set that intrigue me.

My Card of the Day colleague James pointed out that M19 seems to be full of sideboard cards. This is undoubtedly a conscious choice on the designers’ part, as recent Standard formats have seemingly suffered from a lack of answers. Some of them are . . . oddly specific, I guess, and it’s difficult to see what exactly they’re for, especially in Standard itself. 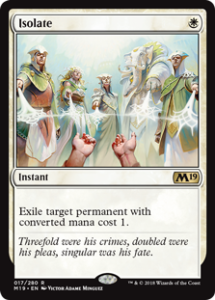 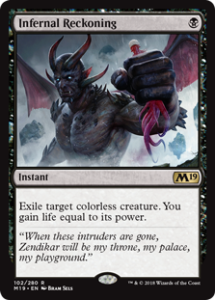 Infernal Reckoning, for example, is clearly for Modern, where Eldrazi are still running around. I don’t know which deck exactly Isolate was intended to target, though. Perhaps Aether Vial? As it turns out, the cards that are currently more problematic in Standard seem to be higher cost, like Goblin Chainwhirler and Teferi, and things like this don’t really help there.

In general, though, it’s a good thing that we are getting more cards that have an eye on Modern and beyond. Wizards of the Coast has various reasons to use a “durational” model for a lot of its designs, but not everyone wants to play like that – for good reason, as a card once printed exists until it’s physically destroyed, and the inherent appeal of each and every Magic card invites players to find uses and interactions beyond the obvious. 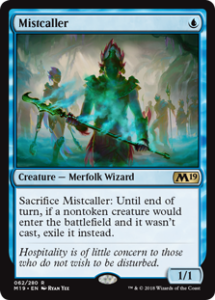 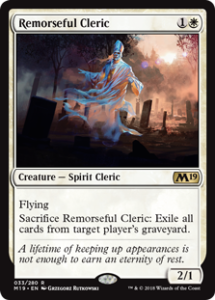 I like sideboard cards on the model of Mistcaller and Remorseful Cleric. I’ve seen one or two comments on how cards like this replicate effects that used to be on different card types. I kind of see the point, but there’s definitely an advantage to having the effect on a creature: it’s almost always relevant and can deal damage. You won’t feel bad about putting a couple of them in a casual creature deck of the right colors and being more ready for what larger card pools might throw at you. They fit very well with core sets’ unofficial theme of being generally useful, in fact. 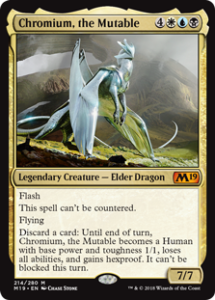 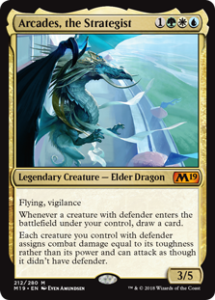 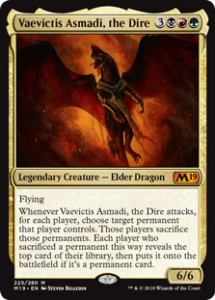 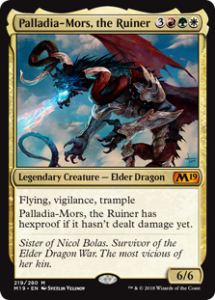 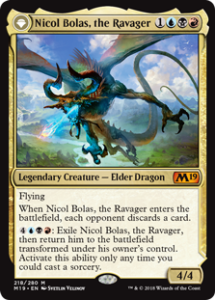 I was actively surprised to see new versions of the Legends Elder Dragons. I kind of thought that since we have Invasion‘s Primevals, Planar Chaos’ alternate Primevals, and Dragons of Tarkir‘s dragon-khans, Magic had sort of left the originals behind. And yes, the original cards from Legends wouldn’t make a lot of decks nowadays, and they’re pretty hard to use even in 93/94. But they’re still important.

The writers of Magic’s early comics and stories looked beyond their difficult mana costs and slightly bare text boxes. They took the typeline “Elder Dragon Legend” and took it to the only place they could: beings of vast power and age, embodiments of lost civilizations and devastating conflicts and deep and abiding mysteries. Of the very things that drew many of us to the Multiverse in the first place.

Shockingly, M19’s player’s guide that comes in the fat pack suggests that stories of the Elder Dragons’ deaths, told directly and indirectly in comics and stories from the 90s, may not be entirely factual. I was pleased by this, too. They are an integral part of Magic’s worldbuilding and flavor, and the Multiverse would feel a little smaller without them. Hopefully, their inclusion is an indication that Magic’s designers are a little more serious about history and tradition than they used to be; the fact that core sets are back might be another data point in favor of that.

I’ll leave you with a slightly more obscure card from this set: Knight’s Pledge. I’ll leave you to consider the question it brings to my mind, one with little to do with how it plays or with any of the issues above. 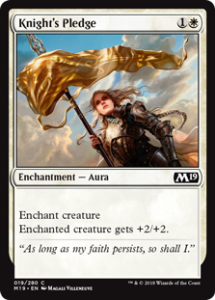 How is it that Magic hasn’t done a proper Arthurian block or set yet?