El Segundo, Calif. (January 8, 2019) – It’s a new year and the Yu-Gi-Oh! TRADING CARD GAME (TCG) is kicking it off with new cards for the most celebrated Duelists, and a totally new way to Duel!  Konami Digital Entertainment, Inc. (KONAMI) is proud to present the next installment in the Legendary Duelists series with an all-female cast, as some of the strongest heroines of Dueling make their return. Then, classic heroes and storied rivals are back in high style, as the fast-paced Speed Dueling format debuts in the real-life TCG! Get ready to ring in the New Year like never before with Legendary Duelists: Sisters of the Rose and the Speed Duel Starter Decks: Destiny Masters & Duelists of Tomorrow.

Some of the most popular Duelists of all time take center stage in Legendary Duelists: Sisters of the Rose, as heroines spanning five generations of Dueling unite in one awesome booster set. First up, Mai Valentine’s Harpie Lady theme soars higher than ever before. Harpie Perfumer is a powerful “Harpie Lady” alternative that searches your Deck for a Spell or Trap Card like Harpies’ Hunting Ground or Harpie Lady Phoenix Formation, adding it to your hand. Pair her with a Level 5 or higher “Harpie” monster and you’ll search not one, but two cards instead!  Follow up with Harpie Oracle to swarm the field and retrieve those cards from your Graveyard.

But as powerful as she is, Mai will have stiff competition, because the Black Rose herself is back! Akiza Izinski unleashes new trickery centered on the Black Garden Field Spell, starting with a new Synchro Monster. Garden Rose Maiden searches Black Garden from your Deck or Graveyard whenever she’s Special Summoned, returning to the field again and again through the dark magic of Black Garden’s Rose Token monsters.  When the time is right, you can banish the Maiden from your Graveyard to regrow a “Rose Dragon” monster or any Dragon Synchro you buried.  The new Dark Rose Fairy makes Synchro Summons even easier, and a new Spell Card called Frozen Rose lets you search and draw key cards to keep your garden in bloom.

Straight from the legendary Duel Academy of Yu-Gi-Oh! GX comes Alexis Rhodes with new Cyber Angels!  Cyber Angel Izana is an incredible new Ritual Monster, tearing apart your opponent’s Spells and Traps, punishing your opponent for targeting your Cyber Angels and dishing out extra attacks.  Meanwhile the Merficul Machine Angel trades “Machine Angel” Ritual Monsters for more draws, getting you to your best cards in record time.  Next, Yu-Gi-Oh! ZEXAL’s Anna Kaboom rides high with a new Rank 11 Xyz Monster!  Superdreadnought Rail Cannon Juggernaut Liebe is a free upgrade to any of your Rank 10 Machine Xyz, overlaying to ascend to 4000 Attack Points, detaching a material to gain 2000 ATK more, and making extra attacks according to its Xyz Materials.  Finally, Yu-Gi-Oh! ARC-V’s Celina debuts new support for her Lunalight strategy!  Lunalight Fusion is the key to Summoning your best monsters, and makes things even easier if your opponent controls a monster that was Special Summoned from the Extra Deck!

Next up, Dueling’s original stars are back with a whole new way to Duel!  The Speed Duel format explodes out of the Yu-Gi-Oh! Duel Links mobile game and into the real-life Yu-Gi-Oh! TRADING CARD GAME with a new series of ready-to-play Decks: Speed Duel Starter Decks: Destiny Masters and Speed Duel Starter Decks: Duelists of Tomorrow. The Destiny Masters collection brings together three of the mightiest Millennium Item holders in Yami Yugi, Ishizu Ishtar, and Maximillion Pegasus, while Duelists of Tomorrow unites Seto Kaiba, Mai Valentine, and Joey Wheeler.  Each Duelist is represented with their own Deck and three all-new Skill Cards, turning the tables on your opponents with Duel-devastating effects.

Command the power of Pegasus’ Millennium Eye to look at your opponent’s opening hand, and if you want, shuffle it back into their Deck and stick them with a new one!  Use Ishizu’s Millennium Necklace to keep your opponent from drawing their most important card, or Yugi’s Final Draw to search anything you want from your Deck! Kaiba’s Dragon Caller ability lets you make huge plays for Blue-Eyes White Dragon, Joey makes massive Fusions with Pal-O’mine-zation, and Mai can draw free cards with Tribal Synergy.  And all of that is just a taste: each Duelist gets three unique Skill Cards so you can keep your opponents guessing.

Speed Duel will be fully supported as a brand-new way to play with exclusive events, starting with a Speed Duel Release Celebration at KONAMI Official Tournament Stores (check here for participating stores). While cards with the Speed Duel marker can be used in Speed Duels, all Speed Duel cards are legal for regular Dueling.  As a bonus, you’ll find three Ultra Rare variant cards in every box of the Speed Duel Starter Decks. 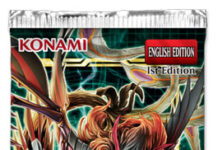