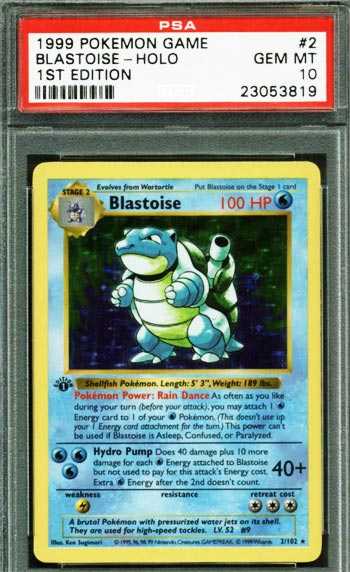 The King of Rain Dance finally makes our Countdown.  Blastoise was an extremely popular card in decks in 1999/2000 due to his abusable Pokemon Power: Rain Dance.  Rain Dance decks and Haymaker decks dominated the tournament scene in the early days of Pokemon.

In 2017, this copy of Blastoise sold for $9000. First Edition Base Set Rare cards can command ridiculously high prices if they’re graded Perfect 10’s.  We also saw several other sales of Blastoise in the $6,000 to $7,500 range.

Of the Big 3 (Charizard, Venusaur and Blastoise), there are less 1st Edition PSA 10’s of Blastoise (83) in circulation than either Charizard (115) or Venusaur (102).  Maybe that’s because Blastoise was getting used a whole lot more in tournaments than those other cards.  Then again, Charizard has been submitted for grading twice as many times as well.